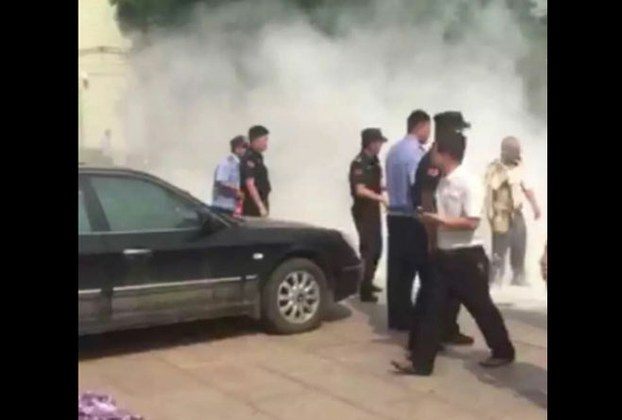 The scene of Liu’s self-immolation as seen in a screenshot of footage taken by a bystander. (via RFA)
China

As a migrant worker from China’s countryside living in Beijing, Mr. Liu had tried everything to meet the taxing requirements in order to let his son attend a local school.

Finally, even after spending years navigating the bureaucracy and giving up thousands, he failed to escape the confines of his rural household registration.

In China, all citizens are factored into a system called “hukou” in Chinese. People who have hukou in poor, rural regions can live and work in large cities, but they and their relatives are generally barred from enjoying most social benefits, including public education.

Before he decided to set himself on fire to protest, Liu thought he had collected enough money to cover the fees involved in allowing his son to attend school in the Beijing district of Changping.

The breaking point came when the authorities informed Liu that his submission had come too late, Radio Free Asia reported in May.

Liu and his wife appealed to the Changping authorities to no avail. Liu then set himself on fire as his wife wept.

The incident sparked broader protests among other people living in Beijing without legal residence in the capital. The demonstrations were quelled by police deployed in force.

“Just by having the misfortune of not being born in Beijing, it doesn’t matter how much you have worked or what contributions you have made to the city,” Li said in an interview with the New York-based New Tang Dynasty Television. “You aren’t allowed the right to education like other citizens.”

Li also blamed the unfair allocation of education funding for causing massive gaps between richer and poorer regions. “The good schools get better and better, just like the Chinese society as a whole, where the gap in classes continues to widen.”

Liu is now receiving treatment at Beijing’s Jishuitan Hospital, and the Changping government stated that they will foot part of his medical fees.

News of the incident was soon censored throughout Chinese social media.