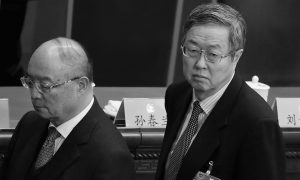 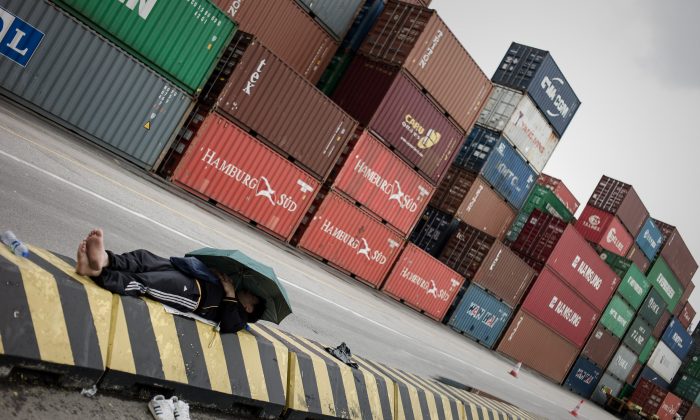 A docker rests in front of containers at the Kwai Chung container terminal in Hong Kong on March 29, 2013. Chinese officials have recently been accused of cooking the books on import and export numbers related to Hong Kong. (Philippe Lopez/AFP/Getty Images)
China

Chinese Export Data Appears to Have Been Pumped Up

New foreign trade data released by China’s customs administration indicated a large increase in exports to Hong Kong versus a subdued rise to the United States and Europe, but foreign analysts doubt the authenticity of the published figures.

An April 10 report from Chinese customs for the month of March stated that imports rose by 14.1 percent, after a 5 percent January-February growth rate, whereas export growth dropped to 10 percent, compared with 23.6 percent for the previous two months. The increased trade produced an 880 million yuan (about $142 million) trade deficit, suggesting Chinese manufacturers and consumers could be buying more.

However, export to Hong Kong increased by 74.2 percent in this year’s first quarter, while export to Europe and the United States only increased by 1.1 and 6.8 percent respectively. This is the first time bilateral trade between Hong Kong and the mainland has achieved such figures, based on the Communist Party’s historical data.

Analysts questioned the figures, saying they may have been distorted through government manipulation or companies misreporting trade.

“The 10 percent headline growth number [in exports] masks an uncomfortable reality–either the trade data are unreliable or if they are reliable then what are being booked as exports are not actually exports,” said China economist Alistair Thornton at IHS Global Insight, according to the Financial Times. “The breakdown of exports by destination veers towards the absurd.”

A foreign trade insider said the excessive increase is due to provincial and local government officials creating arbitrary trade increases to protect their political status, the 21st Century Business Herald reported on April 10.

During a foreign trade outlook forum for the seven northeastern provinces in April 2012, a “military order” was issued to maintain the yearly 10 percent growth rate, an individual familiar with the matter told The Epoch Times. Local governments then adopted an unconventional method to boost the trade volume via Hong Kong’s “special customs controlling zone” (haiguan teshu jianguan qu). As Hong Kong has its own customs, Beijing can treat Hong Kong as its largest trade partner, even though it is part of China.

For example, according to the individual familiar with the way it typically operates, some local governments paid freight costs for companies in the special customs controlling zones to ship all their warehoused goods to Hong Kong and then back the next day. As each container-load counts as $4 million in trade, the round trip can generate $800 million, allowing some special zones to achieve $1.6 billion in trade volume in 40 days.

China’s monthly trade data has been fluctuating since last year. After a sharp drop last April, there was an unexpected rebound in May. Then, there was little change in July and August, followed by significant improvements in September and October, and another a dive in November. This unusual pattern leads many to believe the data have been cooked.

Nevertheless, some China analysts have claimed the country is undergoing an economic recovery, albeit a weak one, according to an April 10 report from foreign exchange website ieforex.com.

Wang Jianhui, deputy director of the Capital Securities Research Institute, told Chinese media that local governments may have inflated foreign trade after Party leader Xi Jinping announced at the recent Boao Forum that China will import $1 trillion worth of goods over the next five years.