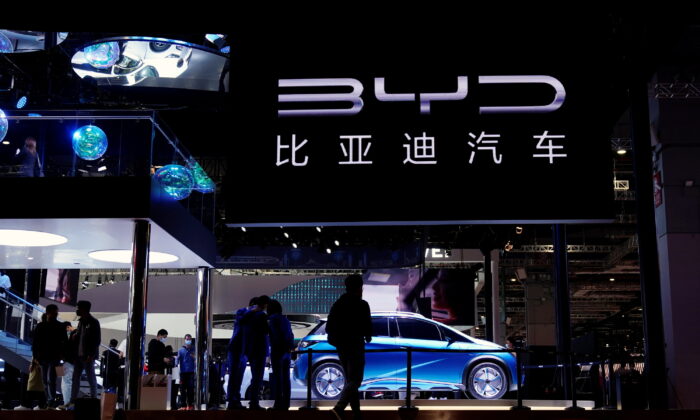 People visit the BYD booth during a media day for the Auto Shanghai show in Shanghai, China, on April 19, 2021. (Aly Song/Reuters)
Thinking About China

Tougher tariffs on China would level the playing field

The competition over electric cars is heating up, and China’s BYD just pulled ahead of Tesla.

BYD sold 641,000 vehicles in the first six months of the year, with Tesla selling 564,000. Tesla only sells electric vehicles (EVs), whereas BYD’s strength is not only EVs—about half of unit sales—but also plug-in hybrids useful for longer trips, heavier loads, and rural and highly urbanized areas with fewer accessible charging stations.

BYD’s growth markets and supply chains are better protected than Tesla’s. As a Chinese domestic company, BYD is advantaged in sales to China’s 1.4 billion consumers. Its computer chip and battery operations are in-house, while Tesla relies on China’s battery manufacturers, including BYD itself, according to a BYD executive (whose interview was later deleted).

Just as the going gets tough for Tesla, its founder and CEO, Elon Musk, is distracted. He sold more than $8 billion in Tesla stock to attempt to bring Twitter private. The man isn’t demonstrating total commitment to Tesla during its time of need.

Tesla lost about 46 percent of its value since a high last year. The market is bullish on BYD relative to Tesla, with the latter’s price-to-earnings ratio at 92 compared to 270 for BYD.

BYD benefits from the regime in Beijing, which will move mountains to ensure—through subsidies and regulatory preferences—that it succeeds in sales globally, from Europe to the United States and throughout the developing world.

BYD has another major advantage. It already sells EVs for under $25,000. For Musk, that’s merely a dream. His strong suit is stuck in the high-end, liberal luxury market of the United States and Europe, which has its limits.

China’s market is only available for Tesla to the extent that the Chinese Communist Party (CCP) allows. Now that BYD is pulling ahead, including technologically in some respects, Musk’s star is setting in Beijing. The regime also doesn’t appreciate his Starlink satellite support to Ukraine.

BYD is positioned to provide affordable EVs to consumers not only in China, but globally, as governments worldwide force their citizens to convert from gas to electric, and China offers the cheapest manufacturing conditions.

The autocratic country’s lower wages, worse labor standards (including the enslavement of Uyghurs), lackluster environmental protections, and state-sponsored industrial espionage give its car industry major cost advantages over those in the United States, Europe, and Japan that must compete on an uneven playing field. Ford, Nissan, BMW, Volvo, and Volkswagen are in the same sorry situation as Tesla.

On July 6, the heads of the FBI and MI5, Britain’s intelligence agency, issued an unprecedented joint warning to business leaders that the CCP is accelerating its state-sponsored industrial espionage and is attempting to influence our democratic policymaking processes.

We must do more to defend ourselves.

That includes our EV industry. The United States, Europe, and Japan can and must protect EV markets from China, which will otherwise use the revenues to fund its military, territorial expansion, and literally cutting-edge human rights abuses.

Defending against Beijing requires an all-fronts effort, including the defense of global EV markets from cheap and unethically produced Chinese cars.

First, negative externalities should be included in Chinese vehicles, which will raise their prices. To do so, democracies can tax China’s EV batteries, for example, at the point of import, to offset their arguably higher pollution levels in the production process.

That includes Chinese batteries imported as part of Tesla vehicles, for example. Tesla must be incentivized to source all of its batteries and vehicles outside China to help deprive Beijing of the economic power it needs to achieve its hegemonic goals.

Second, general tariffs on Chinese goods help to protect U.S. markets. They will incentivize Tesla and other manufacturers to build more factories in the United States.

The price effect of U.S. tariffs is minuscule. Overall, China tariffs have only increased prices in the United States by approximately 0.25 percent—just a quarter for every $100 spent. And they improve America’s gross domestic product, job market, industrial ecosystem, and tax base.

The benefits from U.S. manufacturing multiply over time in a virtuous circle and thus strengthen the United States and democracy, whereas price breaks on Chinese imports empower the United States’ greatest adversary to the same multiplicative extent.

Third, American allies can also benefit by mirroring U.S. tariffs to make them truly effective for all concerned.

Tesla and other U.S. and allied manufacturers can beat China, but we must take action together.