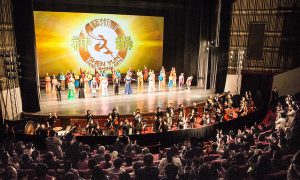 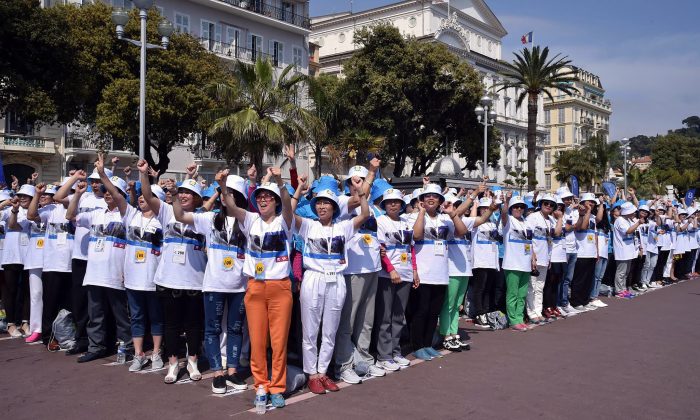 Employees of the Tiens Group at a parade in France on May 8. A number of Chinese firms have rewarded employees with identical package tours. (AP Photo/Lionel Cironneau, File)
China

All-expenses-paid trips to reward top salespeople aren’t unusual, but direct marketing companies that are the Chinese versions of Amway, Avon, and Herbalife are taking it to an extreme by sending thousands abroad on package tours.

One company is sending 12,700 salespeople to Thailand on a tour that continues until next week. The Infinitus Chinese Herbal Nutritious Health Supplement company has outfitted the sales reps with uniforms, the same luggage, and even the same umbrellas.

Earlier this month, a medicinal products group sent 6,000 of its representatives to France where they set a world record by amassing the most people to spell out a phrase that included their own firm’s name. Yet another Chinese direct seller sent 7,000 people to California last year.

“We are making history!” Vice Chairman Xu Guowei of the Perfect China cosmetics company crowed in California during the retreat and package tour. “We have taken 86 flights, stayed in 26 hotels,” he said. “Our group’s attendees have spent $10,000 each this visit.”

The tours are at the intersection of several trends in a country with a predilection for package trips: an explosion in overseas travel, surging national pride and the phenomenal growth in the past decade of direct sales companies. The companies are splashing cash and seeking publicity following a period in which they were banned as pyramid schemes.

But they have also generated debate among Chinese who have become increasingly sensitive to how they are perceived overseas. Some see the tours as tacky ploys by the quasi-evangelical companies to entice new sales representatives to expand earnings.

It takes several months of advance work to book the hotel space and arrange the travel for the tours. A travel agency spent six months planning the France trip.

China’s direct sales market began with the entry of Avon in the 1990s. But the industry plunged into chaos with rampant pyramid schemes, prompting the government to ban the industry altogether in 1998. The ban was lifted in 2005.

Direct selling cuts out shops to sell products or services directly to consumers, using teams of sales personnel who typically get most of their income from a cut of the sales.

After 2005, the industry grew to employ 2.3 million salespeople within seven years. In 2012, the country had 32 licensed direct marketing companies with combined sales of nearly 20 billion yuan ($3.2 billion), according to the Chinese Commerce Ministry.

The growth can be attributed to China’s economic boom, a rising consumer culture and more favorable government policies, and also that direct selling provides low-threshold opportunities for people to start their own businesses, Hu said.

“It also fits into the Chinese culture, where kinships and personal relationships, such as being in the same class or from the same village, are highly valued. They help build trust quickly, which is important for direct selling,” Hu said.

The Tianjin-based Tiens Group, which sells medicinal products, including via direct marketing, sent 6,000 employees on a four-day, all-expenses-paid trip to France to celebrate the company’s 20th anniversary. They formed the phrase “Tiens’ dream is nice in the Côte d’Azur” on a waterfront in Nice. The French foreign minister met with the company president.

Infinitus is sending 12,700 sales associates to Thailand in shifts of two to three thousand for six-day trips to Bangkok and the beach resort of Pattaya. They are taking 110 flights and shuttling in 400 coach buses until Tuesday. Thai tourism officials expect $18 million in revenue.

The three mass tours have generated media buzz not only in host countries, but back home where some Chinese see them as part of their country’s rise on the world stage. They relish the big spending and the warm welcome from host cities.

The tours also have drawn sneers for their ostentation at a time when Chinese tourists are gaining a reputation abroad for showiness and rudeness. China’s National Tourism Administration has created a new black list to shame tourists who misbehave while traveling.

Hu Xingdou, an economics professor at Beijing Institute of Technology, said the mass tours reflect the desire of Chinese to show off wealth after decades of impoverishment, while the uniforms and shouting of slogans reveal the oddly militaristic corporate culture of China’s direct marketing companies.

“It’s also about brainwashing and instilling loyalty in the salespeople,” Hu said.

Zhang Xiaoyan, a senior business director at Infinitus who went on one of the Thailand trips, recalled local people “gaping” at the travelers who were wearing uniforms, lugging suitcases and carrying umbrellas — all with the company logo.

“I think it helped a lot to advertise our company’s culture and image,” Zhang said.

“Some local TV network reported on us and they called us the largest tourist group in history in Thailand.”