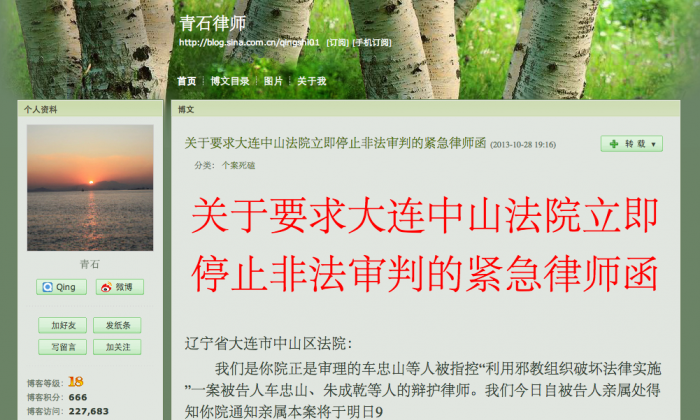 Screen-shot-lawyer-letter: A screenshot from the blog of one of the lawyers, urging the Zhongshan Court in northern China's Liaoning Province to stop what it called the illegal trial immediately. The court opened a trial of 10 Falun Gong practitioners on Oct. 29, without notifying their legal team. (blog.sina.com.cn/Screenshot/Epoch Times)
China

Chinese authorities in the northeastern city of Dalian attempted to conduct a court session in secret on Oct. 29, their latest maneuver in a case aimed at punishing a group of Falun Gong practitioners who installed satellite receivers in people’s homes.

Defense lawyers were furious when they found out about the trial the day before and not told days beforehand to prepare—a violation, they said, of judicial procedures. They wrote a letter to the court and posted it online, declaring that the trial was illegal and invalid.

The trial was conducted by the Zhongshan Court in Dalian City of Liaoning Province. A group of 10 Falun Gong practitioners are being represented by seven well-known human rights lawyers. The lawyers published an “emergency letter” online the day before the court opened, urging the authorities to desist.

They had earlier that day learned of the proceedings from families of the defendants, but none of them received a formal notification from Zhongshan Court, according to the letter. The lawyers said therefore that the trial was illegal.

A family member of the one of the defendant’s was told that they had “lifted commission” with the lawyers—meaning they no longer had to be informed. This was untrue, however, the lawyers said.

“The result of the trial is definitely unlawful, and has no legal effect, because defense lawyers should have been notified three days beforehand, according to the criminal law,” Liang Xiaojun, one of the lawyers, told Sound of Hope Radio (SOH) in an interview.

Liang said that if the court doesn’t provide a reasonable response, he and his colleagues will appeal to a higher court.

“It totally violates the rules of Criminal Procedure. It’s a brutal trampling on the rights of both the defendants and lawyers,” said Tang Jitian, another human rights lawyer who has paid close attention to the case, in an interview with NTD Television. “It’s outrageous for the Zhongshan Court to trample on the law and violate human rights.”

The trial lasted for an hour, and no sentence was announced at the court, a family member of one of the defendants told NTD Television.

The 10 practitioners of Falun Gong, a spiritual practice that has been severely persecuted by communist authorities since 1999, are being accused of “using a heretical religious organization to undermine the implementation of the law,” by installing satellite receivers for NTD Television. NTD carries regular reportage on the persecution of Falun Gong.

The practitioners were arrested along with another 69 Falun Gong practitioners by Dalian’s political police on July 6, 2012. More than a dozen were sent to labor camps, and 28 were placed in detention centers without any legal procedures.

During a previous trial on Aug. 2, Cheng Hai, one of the defense lawyers, was beaten by bailiffs and then detained in a room in the court building after being told by a judge that he could not present video evidence on a computer he had brought.

Cheng Hai was also beaten by uniformed police on April 12, 2013, when the first trial of the case was supposed to open; the trial was postponed to June 21 after that episode.

With translation by Amy Lien and Rebecca Chen.