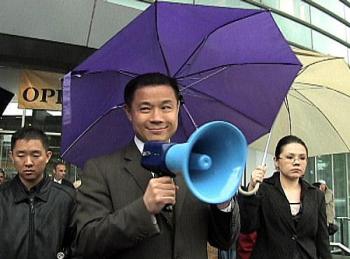 NY councilman John Liu was on the site when large groups of pro-CCP Chinese assaulted Falun Gong practitioners in front of the Queens Library in Flushing on May 20, 2008. (The Epoch Times)
Opinion

A series of recent articles in The Epoch Times have pointed to a close and apparently growing relationship between comptroller candidate John Liu and Chinese government representatives or organizations with close ties to the Chinese Communist Party (CCP), indicating that these should raise concerns among New York voters as to his ability to fully and fairly represent their interests.

At first glance, it may seem far-fetched to some that a government on the other side of the world would care to influence local politics in New York City, or that someone as well-educated and known for representing minority concerns as Liu would do its bidding. But as one places these incidents within a larger context, they begin to make more sense. It is a context not only of a growing relationship with what is still one of the world’s most repressive regimes, but also of one that has a history of interfering with democratic processes beyond its borders and using closer relations with foreign officials to propel them to violate the rights of those the CCP considers its enemies.

With skyscrapers, iPods, and stock markets becoming as common a feature of daily life in Shanghai or Beijing as they are in New York or San Francisco, it can be easy to forget that China is still governed by a Leninist-style authoritarian regime intolerant of dissent and committed to exercising extensive control over the lives and especially, the political choices, of the Chinese people.

It is still a country where a man was jailed last week for 13 years because he tried to start a political party, one of tens of thousands of political and religious prisoners of conscience languishing in prisons, labor camps, and mental institutions.

It is still a country where the new Supreme Court chief justice appointed in 2008 is a veteran Party apparatchik who holds no law degree.

It is still a country where journalists are hired and fired based on the extent to which they follow Party propaganda directives.

And, as a recent article in the Financial Times reminded the world, in what would seemingly be a flashback to East Germany’s Stasi, it is still a country where the authorities maintain personal files on every citizen, files that follow them throughout their lives and track any political “transgression.”

But beyond the Communist Party’s repression in China, what is perhaps of equal importance in understanding the context surrounding John Liu is the CCP’s aggressiveness in seeking to subvert democratic values and processes abroad.

The more common and widely known form this takes is a growing phenomenon of Party leaders using closer relations with foreign officials, particularly economic relations, to propel them to violate the rights to free expression and assembly of those perceived to somehow threaten the CCP’s grip on power at home. Chen Yonglin, a former Chinese diplomat who defected to Australia in 2005, testified that the Party internally referred to these as the “five poisons:” pro-democracy activists, Tibetans, Uyghur Muslims, Falun Gong practitioners, and those advocating Taiwanese independence.

In recent years, there have been a slew of examples of members of these groups encountering censorship, police brutality, and other forms of arbitrary punishment at the hands of governments otherwise known for respecting democratic rights. Not surprisingly, many of these incidents have coincided with visits of high-ranking Chinese officials. In 1999, police in London removed banners and flags from people protesting repression in Tibet during a visit by then-leader of the CCP Jiang Zemin, also using vans to screen Jiang from viewing the demonstrators; a Scotland Yard inquiry later acknowledged the unlawfulness of such actions.

In 2002, the Icelandic authorities barred hundreds of Falun Gong practitioners who were planning to participate in peaceful protests during another visit by Jiang from entering the country—including instructing Icelandic Air to prevent certain passengers from boarding their planes. In December 2005, the national Ombudsman issued a decision that found the government’s behavior to have indeed been unlawful.

More recently, in November 2008, during a visit of Chinese envoy Chen Yunlin to Taiwan to sign a series of accords on transport links and food safety, local police used heavy-handed tactics to prevent individuals from displaying expressions of Taiwanese national identity, criticism of the CCP, or advocacy for Tibetan independence.

The above are just a sample from a wide range of incidents highlighting the extent to which the CCP is willing and able to use a range of tactics, pressure, and incentives to at times provoke democratically elected officials to carry out repression on its behalf.

A less public and less widely known phenomenon is the extent to which the CCP, and especially via diplomatic representatives and overseas proxies, has taken steps to influence the outcome of democratic processes—including elections—beyond its borders.

In an incident that raised eyebrows about the impact that increasing Chinese investment in Africa might have on democratic development in the region, during the 2006 presidential elections in Zambia, the Chinese ambassador held a press conference challenging candidate Michael Sata to “clarify his position” on Taiwan, following public comments he had made suggesting that if elected, his government might restore diplomatic relations with the island.

According to a report by Agence France Presse, the Chinese ambassador said, “We shall have nothing to do with Zambia if Sata wins the elections and goes ahead to recognize Taiwan.” Implicit in such a statement was a threat to halt investments that have in recent years become important to Zambia’s economic development.

In a similar incident hitting closer to home, in 2004, Zhang Zhigang, education secretary at the Chinese Consulate in Chicago, reportedly circulated a letter to student association chairs in the area informing them of an “important task” to be carried out, according to a study conducted by the World Organization to Investigate the Persecution of Falun Gong (WOIPFG) that included a copy of the communication. According to the group, “The task was for [the student associations] to ‘call for as many Chinese students and scholars as possible to write e-mails to their respective congressmen and senators,’ urging them not to support Chen Shui-bian, [then] Taiwan’s [pro-independence] president. Zhang then attached sample letters and contact information of the representatives for the students’ reference. Lastly, he set a deadline for the task—that it be completed by March 20 and that a status report be submitted by March 16.”

As pointed out by WOIPFG, the irony and insidiousness of the above examples is striking. Representatives of a government not elected by its own citizens and one that regularly denies them even the right to freely express opinions is seeking to influence and take advantage of the democratic process for its own purposes.

It is within this context that incidents such as John Liu’s connections and funding by organizations like the Fujian Association or his tendency to side with those attacking Falun Gong, rather than with Falun Gong practitioners, begin to raise eyebrows. They appear to be the early symptoms of a democratically elected official following the CCP’s party line rather than democratic principles and the interests of his constituents. And that is something that many New York voters likely do not wish to endorse.