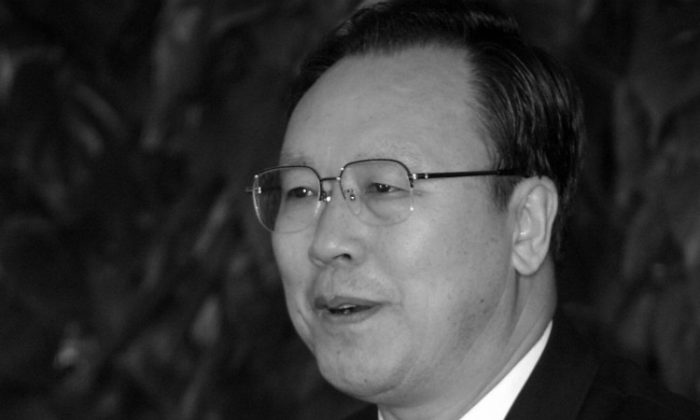 Li Yuanchao at the 18th National Party Congress in Beijing, November. Li Yuanchao was expected by some to enter the Standing Committee in the recent leadership transition; he is thought to have failed in doing so due to factional struggle. (Feng Li/Getty Images)
China

Behind every somber character that made it onto the Politburo Standing Committee in the Chinese Communist Party’s recent leadership shakeup, there lies a story of intrigue and horse-trading. The Party’s political warfare also creates its share of losers, of course, and each failure too has a telling story behind it. Political compromise between competing factions crushed, or in some cases merely crippled, the ambitions of a number of up-and-coming communist officials.

Observers of China’s political system were not exactly surprised when Du Qinglin, the former director of the United Front Department, which along with supposedly building alliances with noncommunist groups also runs an overseas spy network, did not make it onto the Politburo.

Rumors previously leaked to the international Chinese press indicated that Du might be made vice premier and secure a seat on the Politburo, the 25-member committee that sits just underneath the supreme leadership.

Du’s troubles were probably closely tied to his friendly relationship with Bo Xilai, the disgraced Party official, and his alleged role in the coup that Bo was cooking up with former security czar Zhou Yongkang.

Since the 1990s nearly all former directors of the United Front Department have become members of the Politburo at one time or another. Du took the helm at the department in 2007, but he was shunted aside in a surprise move in September, after Ling Jihua, a Hu confidant, was moved from the Secretariat to head the department, replacing Du.

Two prominent members of the red aristocracy were all set to play an important role in formulating the CCP’s military policy going forward, but to their chagrin missed their opportunity to enter the Central Military Commission, the Party organ that controls the military.

“Liu Yuan’s adviser openly blamed the leadership for being too weak and not solving any problems, not being capable or qualified,” said Cheng Xiaonong, a former aide to ousted Party leader Zhao Ziyang. Cheng now lives in the United States.

Their message was, “in other words, it’s our turn.” As the sons of revolutionaries that saw the CCP conquer China, these men saw leadership of the Party as their birthright. “The princelings initiated the fight,” Cheng says.

Liu and Zhang were part of a cabal that was mostly dismantled with the political destruction of Bo Xilai. “Bo was a challenger representing a lot of princelings, the red second generation,” says Cheng.

Instead of following protocol and allowing the new Politburo to select new members of the military commission, Hu Jintao moved first and made two the generals, Xu Qiliang and Fang Changlong, vice chairmen. This was widely seen as being an unusual decision.

“It was a signal to all Party Congress delegates that now the new vice chairmen belong to the new leaders, and it has nothing to do with Liu Yuan and Zhang Haiyang.”

The fact that they were not promoted also “reflects an effort to consolidate professional military officers who are loyal to the Party, not engaged in Chinese internal politics,” according to Jonathan Pollock of the Brookings Institution in Washington, speaking at a recent forum.

The passing over of members of the red aristocracy, however, does not mean that the Chinese Communist Party is now on a path to reform and modernization. Two cadres who have a reputation for being more reform-oriented did not make it onto the Standing Committee, the most powerful body in China.

Wang Yang and Li Yuanchao were aligned with Hu Jintao’s camp, but were left off the Standing Committee apparently due to the influence of former leader Jiang, who saw that a number of his protégés were instead on the committee.

“Everyone is wondering: what is going on with Li Yuanchao and Wang Yang not getting onto the Standing Committee,” said Li Cheng, a scholar of Chinese elite politics at the Brookings Institution, in an interview with BBC Chinese.

“Li Yuanchao represented many social forces, including liberal intellectuals, forces calling for political reform, students returning from overseas study, or university students becoming village cadres,” he said. “This is going to attract a lot of criticism from intellectuals.”

Instead, most of the men who made it onto the Standing Committee have uninspiring, conservative records and are unlikely to pursue policies that do anything to disrupt the status quo.

Wang Yang pushed a number of relatively reform-oriented policies in Guangdong, giving speeches about how the role of the Party should not feature so large in the lives of ordinary people, and cracking down on corrupt officials.

Thus, according to the Hong Kong-based Apple Daily, Wang Yang was out of serious contention for this Standing Committee some time ago, because some of his policies frightened interest groups in the regime. Li Yuanchao, however, was said to have been sacrificed to ensure that Liu Yuan and Zhang Haiyang wouldn’t get onto the Central Military Commission.