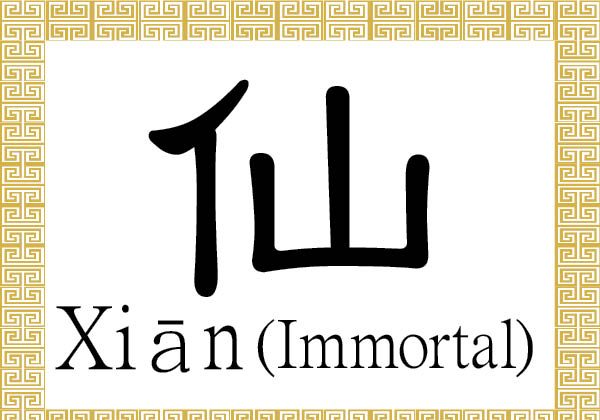 The definitions of the Chinese character for immortal in the first important Chinese dictionary, completed in A.D. 100, were “live long and move away,” and “a human being on a mountain.” (Epoch Times)
China

The Chinese character 仙 (xiān) refers to an immortal, a fairy, or a celestial or supernatural being. It is also used to refer to a genius or sage.

仙 (xiān) has two variants: the earliest recorded form 僊 (xiān), and the rarely used form 仚 (xiān). All three are phono-semantic compounds—characters consisting of a sound component and a meaning component.

In all three variants, the meaning component is 人 (rén) or its variant 亻(rén), referring to a human being or humankind.

In 僊 (xiān), the sound component is 䙴, an ancient form of the character 遷 (qiān), meaning to move or change.

These definitions are consistent with the characteristics commonly associated with immortals, such as eternal life, hermits living in the mountains, and ascending to Heaven.

Examples of character combinations using 仙 include 仙人 (xiān rén), an immortal or a fairy or sage; 仙女 (xiān nǚ) or 仙姑 (xiān gū), a female fairy or an immortal maiden; 仙丹 (xiān dān), the pill of immortality or the elixir of life; 仙景 (xiān jǐng), an enchanting scenery; 仙境 (xiān jìng), a fairyland, wonderland, or paradise; and 仙國 (xiān guó), literally “country of fairies.”

成仙 (chéng xiān) means “becoming immortal,” while 神仙 (shén xiān) is another term for a deity or celestial being; 神 (shén) refers to that which is divine, spiritual, magical, or supernatural.

The peach is a Chinese symbol of immortality, known as 仙桃 (xiāntáo). 水仙 (shuǐ xiān) is the beautiful narcissus, or daffodil.

The cactus is called 仙人掌 (xiān rén zhǎng) in Chinese, literally “an immortal’s palm,” where 掌 (zhǎng) is the character for palm. The leaves of the exotic plant look like they could be the hands of a supernatural being from another world.

八仙 (bā xiān) refers to the legendary Eight Immortals in Chinese mythology, one of whom is He Xiangu (何仙姑, hé xiān gū), an immortal maiden whose family name is He.

The phrase 八仙過海, 各顯神通 (bā xiān guò hǎi, gè xiǎn shén tōng), or “the eight immortals cross the sea, each showing their individual magical powers,” comes from a popular story in which, instead of the customary way of travelling on a cloud that’s used by many deities and immortals, each immortal used his or her own magical object and power to cross the sea.

The phrase metaphorically means that each person has his or her own ways and abilities to accomplish his or her goals.