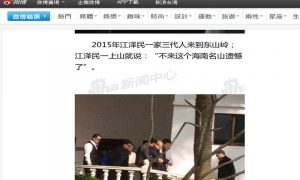 The difference between a host on a television program, a guest on that same program, and the nebulous category of a “guest host” has just become much more important in China. In fact, it’s been raised to the level of a serious political task, judging by a recent notice issued by the clunkily-titled “State Administration of Press, Publication, Radio, Film and Television” (which usually goes by “SAPPRFT.”)

SAPPRFT is responsible for censoring the media in China, and effective July 1, it will be watching closely to see that “guest hosts” no longer appear on television anywhere in China.

“No adjunct host for programs such as news, commentary and talk shows,” the notice says. “There is a clear division of labor between host and guest in radio and TV programs. The host is responsible for linking segments, guidance, and control of the entire program. Guests cannot exercise the function of the host.”

Why Did the Chinese Regime Censor Its Own Premier?

Chinese people are wondering: why so serious? It’s possible that the reaction was triggered by the recent outburst of Bai Yansong, a well-known host on China Central Television who criticized police conduct in two high-profile recent shooting incidents. His famous “News 1+1” investigative report program was taken off the air after the remarks.

Zhang Ming, a professor of political science at the Renmin University of China, told Epoch Times in an interview: “It’s such a minute level of control… why doesn’t SAPPRFT administer the entire television program? Then there’s no need for TV. China will be one TV station: the SAPPRFT.”

Internet users complained that, as with the censors’ meddling in other areas—ensuring a steady output of anti-Japanese propaganda, and crafting a panoply of other stifling measures—”the only function of SAPPRFT is to limit the development of the Chinese entertainment industry.”