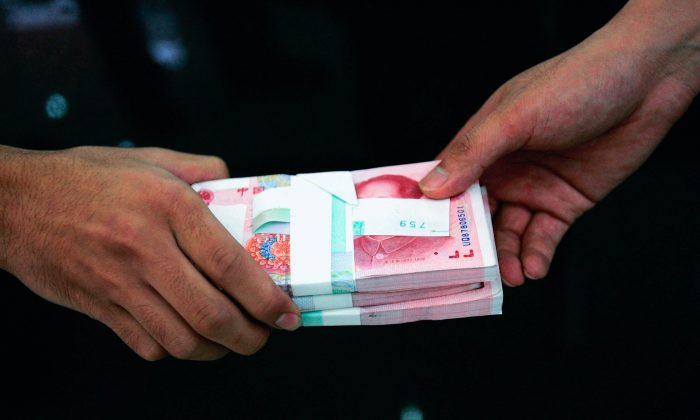 A clerk passes on stacks of Chinese yuan to another clerk at a bank in Beijing, China on July 22, 2005. (China Photos/Getty Images)
China

Cracking down on corruption becomes more complicated when it turns out those doing the cracking down are guilty as well.

On April 1, the Chinese Communist Party’s anti-corruption agency announced that one of its officers was under investigation for “serious violation of Party discipline and law.”

Zhong Shijian, previously deputy secretary of the Guangdong Province Discipline Inspection Commission, head of the Guangdong Supervision Department, and director of the provincial Corruption Prevention Bureau, had his home searched on March 30, according to a recent report by Sohu, an online Chinese news portal.

During the night, several plainclothes investigators ransacked Zhong’s residence and found over a dozen golden turtle-shaped nuggets each worth tens of thousands of yuan. In traditional Chinese belief, the turtle is a symbol of wealth and prosperity.

Guangdong Province, located in southern China, is home to about 100 million people. Between January 2007 and September 2011, Zhong Shijian served as mayor and municipal party secretary in the city of Zhuhai before being named deputy secretary of the provincial anti-corruption agency.

According to the Sohu report, Zhong had been criticized during his time as Zhuhai mayor. Under his direction, the city spent 8 million yuan (about $1.3 million) on over thirty Buddhist pines in the downtown area, an expenditure justified in the name of public beautification. The Communist Party forbids its members from holding any religious beliefs.

How Feng Shui Led This Chinese Official to Corruption

On the surface, Zhong made himself out to be an upstanding member of the force.

This February, at a provincial Communist Party meeting, Zhong made an example of former Guangdong official Pan Shengshen, who had been sacked for corruption.

“This is a perfect example of a blatant official who does not exercise any restraint,” Zhong said.

“Supervision can only work if you yourself are under supervision,” Zhong said in March 2014, as stated on the website of the Guangdong anti-corruption commission.

“When we supervise others, we must also put ourselves in the position of being supervised. Some officials of the commission have failed to abide by the law, abused their power, and became corrupt, causing terrible chaos in society.”

Zhong has yet to be sentenced.