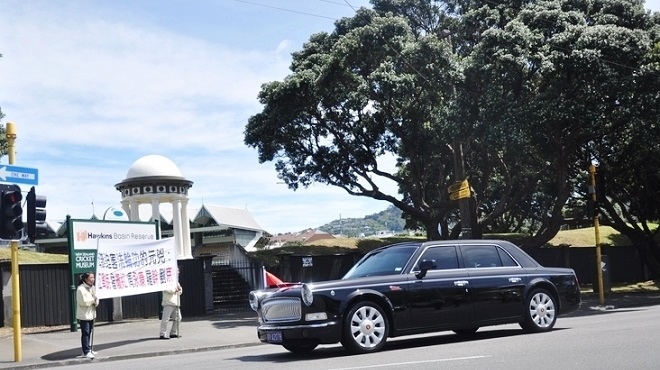 Two Falun Gong practitioners hold a banner that asks to bring those responsible for persecuting Falun Gong to justice while Xi Jinping’s motorcade passes by on its way to the Government House in Wellington, New Zealand on Nov. 20, 2014. (Minghui.org
Asia & Pacific

When local Falun Gong practitioners learned that Xi would visit the Karaka Farm in South Auckland on Nov. 21, a dozen or so decided to go there to protest, calling for an end of the persecution of Falun Gong in China.

In a report on Minghui.org, Jin Long, one of the practitioners, said they contacted the police on site, showed them their banners and pamphlets, and expressed their intention to protest peacefully.

Falun Gong is a traditional Chinese spiritual practice that has been persecuted in China since 1999 on orders of former Communist Party leader Jiang Zemin.

“When the motorcade came, he [Xi Jinping] waved to us,” Jin Long said. “I waved back, and we shouted loudly: ‘Falun Dafa is good! Bring Jiang Zemin to justice!'”

“Two officials from the Chinese consulate appeared very agitated but could do nothing about it,” he said.

On Nov. 20, several hundred people, including Falun Gong practitioners, protesting groups, and a “welcoming group” organized by the Chinese Consulate, as well as many media and police who were maintaining order, crowded the entrance of the Government House.

Because of the crowds, and because the “welcoming group” tried to cover up the Falun Gong banners, several Falun Gong practitioners decided to move to an intersection about 300 yards away, where they put up their banners without any interference, Ms. Tong said.

After more than an hour’s delay, Xi’s motorcade appeared, and the practitioners raised their banners on both sides of the street.