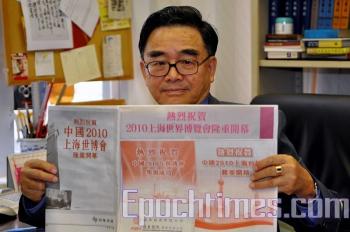 By Li Zen
Print
HONG KONG—While a number of foreign observers have assumed that Beijing spends billions on ostentatious events, such as the Olympics and World Expo, to promote China internationally as a rising power, Jin Zhong, a longtime observer of the Chinese Communist Party and editor-in-chief of Hong Kong’s Open magazine, argues that such events also serve the key purpose of boosting the image of the regime domestically.

Mr. Jin’s views were published in Open magazine, famous for its political commentary, in the editorial World Expo’s Open Ceremony in the False Republic. The article states that for several years the World Expo has been called China 2010 Shanghai World Expo (zhongguo 2010 nian shanghai shibo hui) on the official Chinese language website. However, Its English website retains the original name Expo 2010. “This is obviously frivolous and disrespectful,” Mr. Jin said. Though the differentiation in terminology may be subtle, Mr. Jin argues that “By calling it China World Expo, the CCP does not miss any chance to boost its own image and deceive the Chinese people.”

The World Expo and the Olympics are both events that belong to the international community, Mr. Jin argued in his editorial. No country has added its own name in front of these event names until now, he says; only the CCP would call it “China World Expo.” The CCP has always been putting itself above the nation, he says, with nationalism having become one of the Party’s deftest “tricks.” The name “China World Expo” implies to the Chinese people how great China is, Mr. Jin says, “In other words, how great the CCP is.”

Another observation Mr. Jin made was that on the opening day of the Expo, many newspapers in Hong Kong published advertisements which used different names for the Expo. For instance, Wenweipo used China World Expo in all its advertisements, while only a few out of the 31 advertisements on Takungpao used that specific term. Mr. Jin explains: “Wenweipo is pro-Beijing. It must follow closely what the CCP says. Yet Takungpao is much closer to Hong Kong society. A name like ‘China World Expo’ would not be accepted by the Hong Kong people. Therefore, only a handful of advertisements sponsored by the CCP used the name, and those sponsored by Hong Kong businesses did not use the name.”

“This underhanded misrepresentation of the World Expo should draw the world’s attention, especially the Western world,” Mr. Jin said.