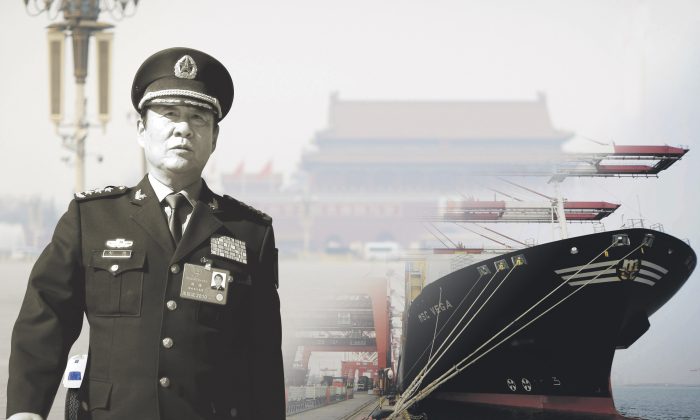 China’s economy continues to hit new lows. The latest official Purchasing Managers’ Index (PMI) and the Caixin PMI have both fallen, indicating a prolonged slump in the industrial sector.

The stock market has encountered three crashes in 6 months. The currency is fluctuating significantly, and capital outflow continues to get worse. All of this increases the risk of China’s economy.

A number of mainland Chinese enterprises also face the risk of being downgraded, and the downgrading tide could happen at any time. The outside world predicted that the Two Sessions would be shrouded by many economic problems.

Before the Two Sessions, the international community cast a no-confidence vote on China’s economy.

Bloomberg reported that Moody’s downgrading rating on China highlights the growing concern among global investors. China will struggle to overhaul Asia’s largest economy at a time when capital outflow is getting worse and debt levels have climbed to an unprecedented 247 percent of gross domestic product.

Capital outflows bring risks for policy, currency and economic growth. In the past 18 months, there has been a significant decline in China’s foreign exchange reserves.

The currency is fluctuating significantly and capital outflow continues to get worse.

The foreign reserve dropped to US$3.2 trillion in January this year, a continuing fall in foreign exchange reserves of US$762 billion since June 2014.

Moody’s retained the Aa3 rating on government bonds, noting that China’s financial strength and sizeable reserves gave it more time to address economic imbalances. However, Moody’s warned that it could downgrade China’s rating if government debt continues to rise, reforms on state-owned enterprises slow down, capital outflows remain high, or there is significant tightening of capital controls.

A rating downgrade would have a negative impact on the economy of both China and Hong Kong. Businesses would have to pay higher interest rates in the future if they wanted to borrow money from abroad.

For some mainland enterprises that have financial difficulties, if they failed to repay the loan, it would increase their probability of bankruptcy.

State-run news agency Xinhua issued a statement to rebut Moody’s decision. Kwan considers this the usual practice of the Chinese government, which also reflects their lack of confidence in China’s economy. He stated that there is no doubt about Moody’s credibility.

Millions Could Be Laid Off

Bloomberg quoted IG market analyst Angus Nicholson as saying that Moody’s rating is right, especially since there are reports from Chinese government officials that 5 to 6 million employees could be laid off in the state-owned industrial sector, which will certainly have a huge impact on the performance of economic growth and bank loans. At some point, if there is a real growing concern that the whole Chinese banking system may need to be recapitalized, certainly that will be a real concern for China’s credit rating.

Rating or not, we have no confidence in the Chinese economy; that is a consensus.
— Alvin Cheung, associate director, Prudential Brokerage Limited

“Rating or not, we have no confidence in the Chinese economy; that is a consensus,” Cheung said.

Another focus of the Two Sessions was Liu Yuan, the last political commissar of the People’s Liberation Army (PLA) General Logistics Department. On Feb 26, 2016, he was named deputy chair of the NPC Financial and Economic Affairs Committee.

Another view is that Liu may be promoted to vice chairman of the NPC, helping Xi keep an eye on Zhang.

The main function of the NPC Financial and Economic Affairs Committee is to consider motions and various research reports. Though it does not have real power as front-line government officials do, it does have a wide range of information channels and can connect to different levels and aspects of society.

Current affairs commentator Zhou Xiaohui said Xi has obtained “a controlling position” in the Xi-Jiang struggle. Now the most important topic for Xi is how to solve the economic transition issue.

Zhou said Liu has a special background, and his taking a position in the NPC will upset Zhang. In addition, Liu’s “tiger hunting” background will disturb those corrupt senior officials who have retired to the second layer and taken a role in the NPC, such as the former Party secretary of Yunnan Province, Qin Guangrong.

On Feb 28, U.S.-based economist He Qinglian published a commentary on the Voice of America titled “China’s Financial Crisis: Only ‘One Kilometer’ Away From the Cliff,” which also mentioned Liu’s new position.

He’s commentary stated that Liu has never taken a role in the financial sector, yet the authorities appointed him as deputy chair of the NPC Financial and Economic Affairs Committee.

“What is wanted is not his professional experience, but his prominent princeling identity,” He stated.