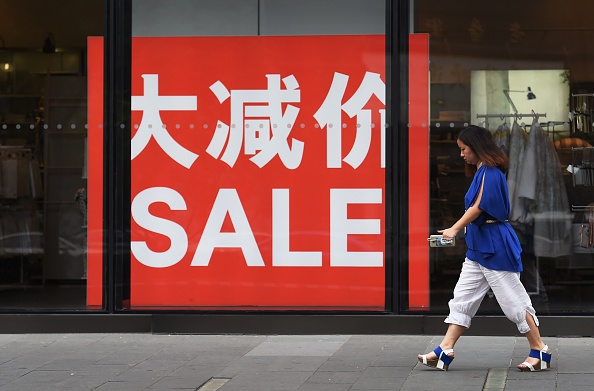 A woman walks past a sale sign at a fashion outlet in a shopping mall in Beijing on July 15, 2015. (GREG BAKER/AFP/Getty Images)
China Business & Economy

Previously, those taxes were collected by different agencies and authorities across China, and loopholes in the system allowed many businesses to dodge the levies.

China’s social security system mandates that taxes are paid by both employers and employees, the latter typically doing so through paycheck deductions. The change is expected to significantly increase the operating costs of small- and medium-sized enterprises, according to the latest report from Guotai Junan Securities, one of China’s largest investment and securities companies.

The report, released on Sept. 4, projects that companies will pay an additional 1.5 trillion yuan in taxes per year, reducing their earnings by about 13 percent. As the reform tax plan increases corporate operating costs, it essentially passes these burdens to the employees, whose consumption will in turn decrease—by roughly 1.2 trillion yuan ($175.77 billion).

The average social security tax rate in China’s 31 provinces and self-governed municipalities is 39.07 percent, so the total social security funds that were supposed to be collected in 2017 stood at 8.6947 trillion yuan ($1.27 trillion), according to the report. However, the actual total collected last year was only 6.7154 trillion yuan ($976.9 million), meaning that about 2 trillion yuan (about $300 billion) in taxes went unpaid by companies and individuals. The Chinese regime is mandating that that amount be fully paid once the new policy takes effect in 2019, according to the report.

If the Chinese regime seeks to have the fees collected in a short period of time, it will be a huge burden to individuals and businesses, the report added.

According to the study by Guotai Junan Securities, the percentage of pre-tax income for Chinese companies and employees that must go to various forms of insurance is double that of the global average.

Pension deficits are worsening as the Chinese population grows older. There is currently a 1.2-trillion yuan shortage in pension payments, according to a state report.

Demographic forecasts show that by 2020, more than 255 million Chinese will be aged 60 or older—almost 18 percent of the total population. By 2030, the figure will rise to 320 million.

However, the government is paying current pensioners using funds contributed by people born between the 1970s and 1990s. It is unclear how their pensions will be funded when they reach retirement age.

The Chinese edition of the Epoch Times contributed to this report.