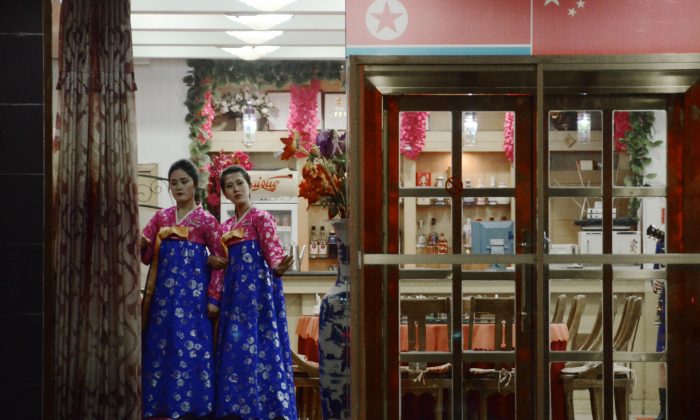 Hostesses wait for customers at the entrance to a Korean restaurant in Dandong in China's northeastern Liaoning Province, on Dec. 12, 2012. Growth in China's restaurant industry slowed by almost 40 percent in 2012. (Wang Zhao/AFP/Getty Images)
China

Until recently, restaurants in China lived off the fat of the land. Lately, they have been put on a diet.

“When the economy is not doing well, people eat out less often,” said Ms. Guo, a Shanghai resident. “People who used to eat out once a week are now going to restaurants only two to three times a month.”

“It used to be that restaurants made high profits,” Ms. Guo said. “I had once considered opening one myself. Now that restaurants are closing left and right, I dare not think about it anymore.”

Ms. Guo is onto something. In 2012, restaurant closures outpaced restaurant openings. According to the Shanghai Food and Drug Administration, 6800 restaurants opened in 2012, while 7000 went out of business.

According to the Jinghua Times, the Chinese Culinary Association issued an emergency call to the Chinese state requesting a bailout of the restaurant industry. Restaurant bankruptcy has become increasingly widespread throughout China. In Xiamen City in southeastern China’s Fujian Province, monthly bankruptcy rates have reached 15 percent.

Part of the problem is high taxes.

According to the Chinese Culinary Association, there are up to 46 types of taxes being imposed on restaurants throughout China. Out of these, only 12 are typically paid by all restaurants; 34 are other types of taxes levied by different regions. These have added to the burden of the restaurant industry, according to China News.

Members of the restaurant industry say that though labor costs and property rental fees are high in top-tier cities—cities such as Beijing—the amount of taxes imposed may actually make operating restaurants in second- and third-tier cities twice as expensive as the top-tier ones.

Mr. Zhou, the regional manager for Beijing’s Yippin Restaurant Co. Ltd, told The Epoch Times that although profits are decreasing in the restaurant industry, tax burdens have continued to grow.

“There is a long list of taxes,” he said. “Aside from those taxes, there are also other fees, as well as licenses for health and fire safety.”

Representatives of Yum! Inc’s China Division said that they have been forced to pay special fees for opening stores in various locations in China. For example, price-adjustment fees, which are compulsory under the pretense of “price stabilization,” must be paid in several second-tier cities at a rate of about 1 percent of gross sales.

While restaurants are going out of business, the reported numbers for the industry as a whole showed growth, albeit slowing growth, in 2012.

The China Cuisine Association’s “Quarterly Catering Industry Analysis Report: 2013,” yearly fiscal growth calculated for 2012 at 8.4 percent, which is 4.9 percent less than the growth for the previous year. It was also the first time in a decade with only single-digit growth for both January and February.