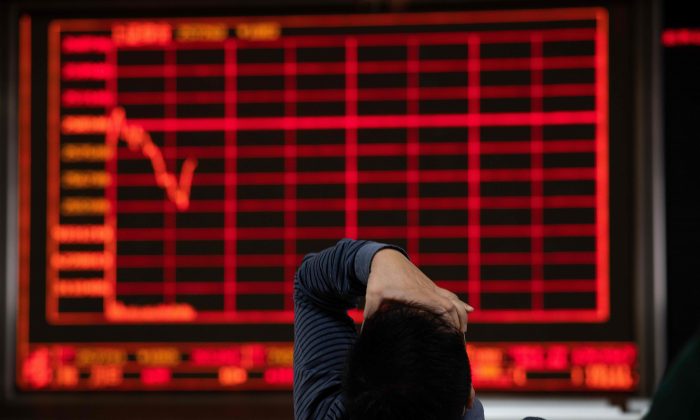 An investor gestures as he looks at stock price movements on a screen at a securities company in Beijing on October 12, 2018. (NICOLAS ASFOURI/AFP/Getty Images)
China

A Chinese finance blogger analyzed the latest data on state-owned assets and found that given the enormous debt owed by the Chinese regime, the “public economy” is in no position to act as the backbone of the national economy.

According to statistics published by China’s Ministry of Finance, as of the end of December 2017, local governments’ owed 1,647.6 billion yuan ($236.19 billion) in debt, while the central government’s national debt balance was 1,437.016 billion yuan. Total government debt stood at 29.95 trillion yuan, or $4.29 trillion.

However, the authorities’ are not limited to only central government bonds and local debts. The analysis does not include invisible debts owed by local governments, which exceed the official numbers by several times. In terms of liabilities on the table, the Chinese regime also has policy-induced banking debts and government-backed institutional debts.

According to data published by the Central Clearing Company of China’s Ministry of Finance, as of the end of 2017, China’s policy bank bonds were worth 13.39 trillion yuan ($1.92 trillion) and government-backed institutional debts amounted to 1.48 trillion yuan ($212.1 billion), making a total of 14.9 trillion yuan ($2.14 trillion).

All forms of state-associated liabilities put together amounted to a total government debt of $6.44 trillion.

According to the state-owned assets report released on Oct. 24, as of the end of 2017, central and local governments and other administrative institutions had a net asset value of 20.4 trillion yuan (about $3 trillion).

State-owned assets mainly refer to non-profit assets such as government office facilities, schools, hospitals, and affordable housing. The 20.4 trillion yuan of administrative net assets are vastly dwarfed by the 44.9 trillion yuan in debts. The remaining debt of 24.5 trillion yuan ($3.51 trillion) can only be covered using the CCP’s “public economy.”

The CCP is unlikely to sell off Party officials’ government buildings to pay off debts. Moreover, even if the Party sells off all its administrative assets, the funds gained from selling the “public economy” can hardly balance out the government’s bottomless liabilities.

A Look at the CCP’s ‘Public Economy’

Since the CCP’s “public economy” was worth 66.5 trillion yuan at the end of last year, appearances would suggest that all debts can technically be repaid. But paying off debts this way would result in a massive political dilemma for the Party: large-scale privatization would effectively remove the state sector — and with it the Party’s leadership — from its dominant role in the Chinese economy.

In the state-owned enterprise shareholding structure, in addition to the state-owned shares in holding positions, there are shares owned by private capital and foreign entities. If the state owns less than half of the shares in a company, it becomes a private enterprise. Should this happen on a large scale it would be the end of the CCP’s “public economy.”

The Party’s debt crisis has intensified this year due to the US-China trade war and China’s economic system defects. By the end of September 2018, total treasury bonds, local bonds and policy financial bonds had increased by 3.58 trillion yuan ($0.51 trillion).

Viewed in this context, the Party’s power over state assets is waning, and the “public economy” exists only in name.