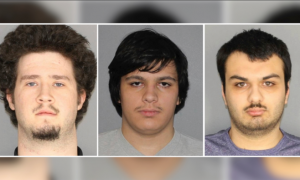 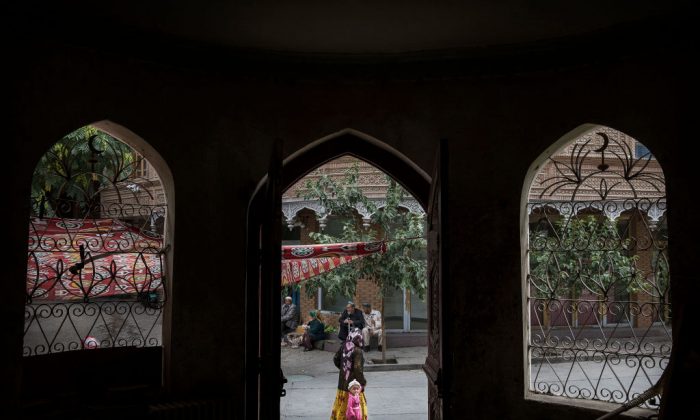 An ethnic Uyghur woman walks by a closed Islamic school on July 1, 2017 in the old town of Kashgar, in the far western Xinjiang province, China. (Kevin Frayer/Getty Images)
Thinking About China

On Aug. 11, officials in the Chinese city of Weizhou, in the Ningxia Hui Autonomous Region, gave into the demands of thousands of protestors and delayed the demolition of the city’s Grand Mosque.

By announcing the delay in the face of mounting unrest, the local government signaled it was playing a weak hand, and this could embolden protestors in other Muslim areas of the country.

On Aug. 3, authorities in Weizhou had announced that if the congregation did not take down the mosque by Aug. 10, they would “forcefully demolish it according to the law.” The reason? No permit had been issued for its redesign.

At least on its face, the climbdown was complete. A county official promised nothing would happen until people in the town had agreed to a reconstruction plan, according to “local sources” quoted by Hong Kong’s South China Morning Post.

The mosque—featuring nine domes, four minarets, and multiple crescent symbols—was completed last year, taking the place of one built after a 600-year-old mosque, in the style of a Chinese temple, was destroyed in the Cultural Revolution. The Grand Mosque is the largest such structure in the Ningxia region.

Weizhou authorities did nothing for two years while they watched workers build the mosque, waiting for completion to raise their objection. The timing angered many demonstrators.

Behind-the-scenes negotiations between officials and religious leaders resulted in an agreement to remove eight domes but leave the rest of the mosque in place. Protestors, however, were in no mood to compromise and did not want to see any part of the mosque removed.

“Now we’re just in a stand-off,” an unidentified Weizhou resident told the Hong Kong paper. “The public won’t let the government touch the mosque, but the government is not backing down.”

Beijing has reason to be concerned. Clashes in the same county in 2012—also in an attempt to save a mosque—resulted in as many as five deaths.

The Chinese constitution guarantees freedom of religion, but Muslims and other religious adherents know the Chinese Communist Party is hostile to all faiths. The irony is that the Party’s ugly policies against Muslims—confiscating copies of the Quran, prohibiting instruction for the young, and forcing them to shave beards and eat pork—have created resistance where before there was almost none.

“It’s ridiculous. I am a Muslim, and Muslims need a mosque,” a small business proprietor living near the site of the mosque destroyed in 2012 told Reuters. “They are just ordinary people, coming together for religious purposes, not to overthrow Communist Party rule.”

In Ningxia, the once-quiet Hui minority group, virtually indistinguishable from the so-called Han majority group, have been forced to take up the cause of religious freedom. Before Beijing’s repressive campaigns, there was virtually no Hui activism. The Hui account for about 10 million of China’s estimated 23 million Muslims and are considered the third-largest ethnic group in the country.

We see the same dynamic in the Xinjiang Uyghur Autonomous Region, where Beijing is waging a brutal, long-term assimilation campaign against another Muslim group. Among other things, the authorities have interned hundreds of thousands, and perhaps millions, of Uyghurs in concentration camp-like facilities, known as “re-education centers.” Chinese officials have just denied accusations made before a United Nations panel, but testimony and satellite imagery confirm China is detaining many in heavily fortified camps, something rightly called a crime against humanity.

Beijing evidently hopes to intimidate Uyghurs so they no longer have the means to resist its campaign.

Under current ruler Xi Jinping, the campaign against Islam has intensified, especially since 2015 when he called for officials to Sinicize religion. In the case of Muslims, that meant an effort to combat the evils of “Islamization” and “Arabization.”

“It’s clear that the Chinese government’s hostility towards Muslims in China is not only limited to Uighurs,” Patrick Poon of Amnesty International told the BBC. “Hui Muslims are generally considered less vulnerable to crackdowns, but this incident proves that the government is determined to use a holistic and heavy-handed approach towards all Muslim ethnic minorities in China.”

That heavy-handed approach put the mosque in Weizhou in Beijing’s crosshairs. If the structure continues to stand—with or without eight of its domes—it will serve as a reminder of successful resistance. A symbol of successful resistance in one location is a danger to the Party everywhere, giving confidence to religious adherents, democracy advocates, disenfranchised homeowners, defrauded investors, and more.

At the moment, protest movements are emerging across the country, as grievances multiply, which has raised the stakes even higher for the Hui in Weizhou.

In recent weeks, protestors traveled hundreds of kilometers to converge on the Weizhou mosque, some to bring food to those already there.

To isolate the mosque, Chinese riot police built barricades of buses. Cellphone service for nonresidents was cut off in the area within nine miles of the mosque. “They told us the internet was down because of recent rains, but does that really make sense?” one person asked AFP. “They’re afraid of us spreading videos.”

And the authorities must also be afraid of protests spreading from one congregation to the next, one province to another, eventually presenting an insurmountable challenge to communist rule.