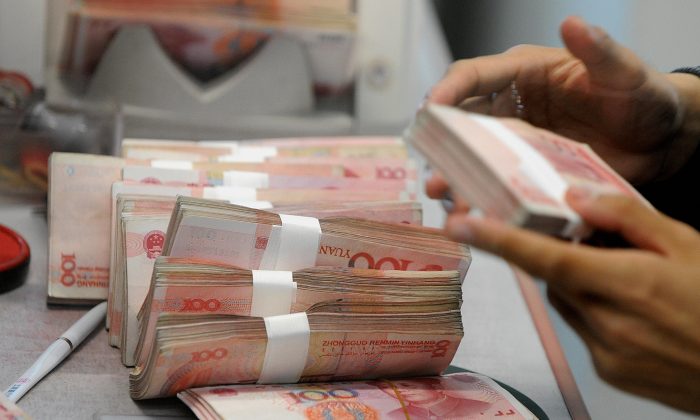 In this file photo, Chinese 100-yuan notes are counted at a bank in Shanghai on April 11, 2008. According to Cheng Xiaonong, hot money—money moving into China seeking a short-term profit—accounts for 10 percent of China’s GDP. (Mark Ralston/AFP/Getty Images)
China

Cheng Xiaonong
Contributor
Dr. Cheng Xiaonong is a scholar of China’s politics and economy based in New Jersey. Cheng was a policy researcher and aide to the former Party leader Zhao Ziyang, when Zhao was premier. He also served as chief editor of the journal Modern China Studies.
View profile
Follow
biggersmaller
Print

China’s economy and banking system are feeling the effects of money shortages. But despite strict state monetary controls, billions in hot money move almost unhindered into and out of the country through underground channels.

China’s foreign reserves decreased by US$37.8 billion in the months of May and June, based on data released by the People’s Bank of China (PBOC)—China’s central bank.

These events have triggered debates in financial circles and media outlets about the outflow of hot money from China.

I have studied hot-money flows—money that moves into a market for the sake of short-term profits—for many years. My research indicates that over the past 15 years, hot money has gradually occupied a large portion of foreign investment in China. With massive amounts of hot money continuing to flow in, the impact of hot money on China’s economy has thus kept growing.

China’s monetary authorities, however, often intentionally cover up the facts of hot-money outflow, misleading the media and business communities.

To reveal the facts of China’s hot-money flows, I will explain certain basic concepts and use relevant data to illustrate what’s behind this hot money.

Over the past decades, China has lured massive amounts of foreign direct investment (FDI) into different industries to boost China’s economy with much- needed advanced technology and to accelerate China’s industrialization.

Regardless of whether the capital comes in the form of “green field investments” (foreign companies starting new ventures in China) or joint ventures between foreign investors and domestic entrepreneurs, after production facilities are installed and tested in a region, industrial capital from foreign investors becomes a long-term foreign investment as a part of China’s national accounts and is then hard to withdraw.

Unlike long-term industrial investments, hot money is known as speculative short-term capital. It pursues high short-term return and has no targeted industrial sector. Consequently, the continuous inflows of hot money into China may have a destabilizing effect on the economy.

The primary source of industrial capital comes from industrialized countries, such as western Europe, the United States, Japan, South Korea, and Taiwan.

Over the period from 1997 to 2008, the average foreign capital from these countries hovered between US$21 billion and US$25 billion annually. But in recent years, industrial investment has declined from 60 percent to 20 percent in China’s total FDI.

With billions of hot money flowing into China each year, the cumulative scale could have reached hundreds of billions of dollars. This conclusion might be unpalatable, but it’s a fact.

China’s real estate sector and stocks are the primary fields being favored by the large inflow of hot money into the country.

Under the strict exchange control of the central authorities, Chinese nationals are restricted to a certain amount when they take foreign currency out of China.

Moreover, individuals and firms are able to get around strict currency controls and transfer foreign currency abroad through underground networks.

In fact, billions in hot money comes and goes almost unhindered into and out of China, because underground conduits have run for decades, channeling speculative cash across the country.

Despite the state’s monetary controls and restrictions, speculators find ways to move their capital in and out of China.

There is no well-defined method to measure the scale of hot-money flows, but the change in the national foreign reserves helps estimate the amount of hot money.

China’s foreign exchange reserves are the foreign assets held or controlled by its central bank. China’s trade surplus, the influx of FDI into the country, and hot-money inflows have mainly contributed to its rapid accumulation of foreign-exchange reserves.

Generally speaking, foreign reserves increase slowly when there is no huge speculative capital flow. But quarterly data of the reserves is not released until one month after the quarter ends.

An alternative indicator for estimating hot-money flows is funds outstanding for foreign exchange (FOFE). The data, which is published monthly by the PBOC, includes foreign exchange purchase and sale transactions by the central bank, commercial banks, and other financial institutions.

However, when analyzing data of FOFE for approximating hot-money flows, media and financial circles are often trapped, unknowingly, in a maze generated by the PBOC.

The data of FOFE is calculated by applying an adjusted yuan exchange rate, which obscures the actual volume of FOFE and weakens one’s ability to measure the volatility of the flow of hot money.

When there is a sharp drop in foreign reserves, the PBOC uses a lower value of yuan exchange rate in its calculation, resulting in a smaller decrease in FOFE, and then corrects the rate in subsequent months.

When there is an increase in foreign reserves, coinciding with large inflows of hot money, the bank uses a higher value of the rate to reduce the level of increase in FOFE. Consequently, the impact of hot money appears to be smaller than it actually is.

As a result, the monthly volatility of FOFE appears confusing, and sometimes even professionals are deceived.

My analysis of the data of FOFE during the period of January 2011 to June 2013 shows rapid outflows of hot money over the past two and a half years. In fact, hot money flows into and out of China often.

The PBOC said FOFE had reduced by US$6.7 billion (41.3 billion yuan) in June 2013. But by applying a fixed yuan exchange rate, I determined that the actual amount of FOFE in May and June combined is US$51 billion (314.2 billion yuan).

The hot-money scale is approximately 10 percent of China’s monthly gross domestic product, flowing rapidly in and out of China.

Dr. Cheng Xiaonong holds a doctorate in sociology from Princeton University and was an advisor to former Chinese Premier Zhao Ziyang.

First published in China in Perspective. Published with permission.

Translated by Euly Luo and John Wang. Written in English by Gisela Sommer.