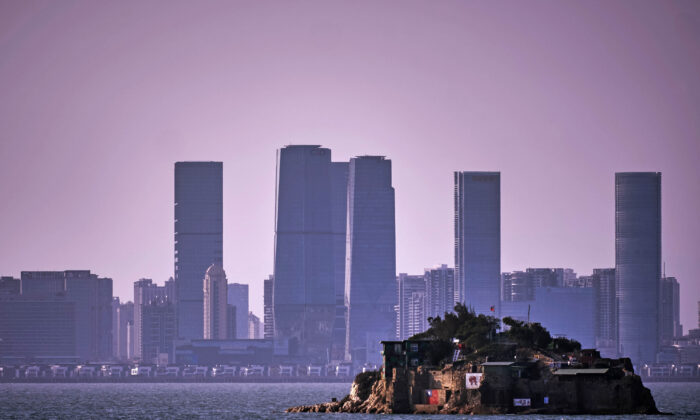 An Island that lies inside Taiwan's territory is seen with the Chinese city of Xiamen in the background on Feb. 04, 2021 off the coast of Lieyu, an outlying island of Kinmen that is the closest point between Taiwan and China. An Rong Xu/Getty Images)
Chinese Regime

The Chinese communist regime’s recent radio show has been broadcasting in Taiwan. Its soft propaganda is causing concerns with experts over infiltration of and influencing of the Taiwan election next year.

According to the Chinese regime, the channel broadcasts to Kinmen and Matsu in Taiwan. However, the Chinese language Epoch Times reporters have found that it also covers Taipei, Taichung, Kaohsiung, and Hualien in Taiwan, and the signal is quite clear.

Taiwan’s legislator Lin Chuyin held a press conference in early December and pointed out that “Voice of Taiwan Strait” uses three AM channels and two FM channels to broadcast in Taiwan. Taiwan’s National Communications Commission data shows the broadcasting range of these 5 channels covers the entire territory of Taiwan, even outlying islands, and the source of its signal is not in Taiwan.

Lin said at the press conference that the channel first attracted Taiwanese audiences through soft program such as tourism and lifestyle, as well as the “new dream chasing stories” of Taiwanese youth in China. It then invited Taiwanese pro-China scholars to participate in the opening of a political theory program, criticizing Taiwan’s current affairs and propagating the Chinese regime’s Taiwan policy, to influence audiences.

A frequent listener of the channel pointed out that the “Voice of Taiwan Strait” program often invites Taiwanese to share their good life in China. Much of what they say is inconsistent with the facts. The program is broadcast in Mandarin for 20 hours a day, with a strong sense of the Chinese regime’s united front policy.

Information strategy scholar He Chenghui told the Chinese language Epoch Times that the CCP’s penetration of Taiwan aims to achieve a state of “entering the island, entering the household, and entering the heart.” Therefore, it launched a psychological warfare against Taiwan through various means. “Their budget is ‘unlimited.’ Broadcasting is the most typical psychological warfare technique in human history. They [the CCP] invest a lot of resources in the development of radio propaganda.”

Taiwan will have multiple elections. He Chen said that the situation of affecting Taiwan’s elections through China’s radio broadcasting “will definitely happen.”

Wu Chien-chung, Associate Professor at Taipei University of Marine Technology explained to the Chinese language Epoch Times the methods of the CCP’s psychological warfare broadcast on radio. “First, through popular language, information sharing is turned into action. For example, setting up programs about the environment and food to shorten the distance with the Taiwanese audience; secondly, further attacking the ruling party’s inability by focusing on the negative problems. Then, synchronously using the internet to support and maintain a state of mobilization anytime, anywhere. This, and working together with the cyber army to launch a larger offensive that can eventually create social opposition, and even reverse many people’s views on political issues, and dilute the anti-Communist spirit of the Taiwanese.”

Akio Yaita, director of the Taipei branch of Japan’s Sankei Shimbun, revealed on Facebook that many underground radio stations in central and southern Taiwan have been bought by the Chinese communist regime in an attempt to influence the ruling party and the four referendums. These radio stations will not directly praise the CCP, but will criticize Taiwan’s ruling party to divide Taiwanese society.

Zhang Yuanzhang contributed to the report.