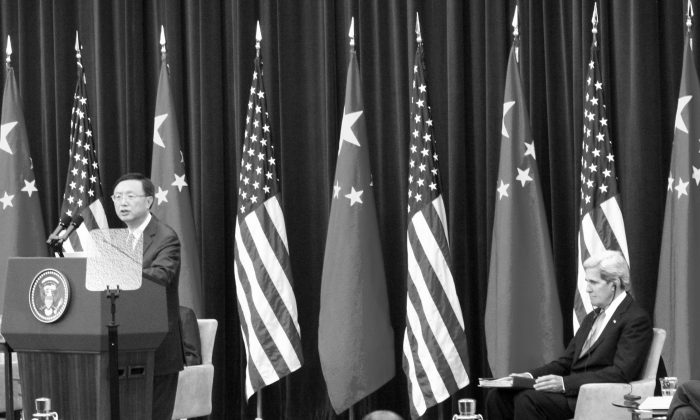 Yang Jiechi, state councilor of the People's Republic of China, addressed the crowd with John Kerry, U.S. secretary of state, looking on, at the U.S.-China Strategic & Economic Dialogue being held in Washington on July 10 and 11. (Matthew Robertson/Epoch Times)
China

WASHINGTON—For the most part, the statements by Chinese and U.S. officials during the opening session of the U.S.–China Strategic and Economic Dialogue, a major bilateral confab being held here on July 10 and 11, could almost have been read from the same teleprompter. Except for one item: The awkwardly titled New Model of Great Country Relations.

The New Model appeared prominently in the introductory remarks by both Chinese officials, State Councilor Yang Jiechi, and Wang Yang, a vice premier of the People’s Republic of China.

Wang Yang said that at the recent meeting between President Obama and Xi Jinping, both leaders reached a “consensus to together push forward the new model of great country relations, setting a direction for China-U.S. relations.” The main point of the current Strategic and Economic Dialogue, he said, was for this “consensus” to be filled with “practical content” and be implemented in “real, actual results.”

Yang also referred to the supposed consensus. In that context, he said, “We hope that through dialogue we can help the American side mutually understand that China is truly trying to reach the goal of over 100 years of struggle, and that the Chinese Communist Party, upon reaching its 100th anniversary, aims to comprehensively construct a moderately prosperous society.”

Those remarks were embedded in the usual talk of cooperation, mutual trust (lots of it), win-win, and so on. The U.S. remarks also included those standard platitudes, but made no mention of the New Model.

Articles in the Chinese state press foreshadowing the dialogue also argued that the key to the Strategic and Economic Dialogue was this new theory.

Xinhua, the state mouthpiece, for example, declared: “Top on the agenda are discussions on the implementation of the consensus reached by Chinese President Xi Jinping and U.S. President Barack Obama at their summit in California last month on building a new type of major-country relationship based on mutual respect and win-win cooperation.”

The “consensus” however, may have been confined to the Chinese side, because U.S. officials seemed to be unsure of quite what to make of it.

Asked about the matter by a reporter with CCTV America, the overseas broadcast mouthpiece of the Chinese Communist Party, an administration official on a press call on July 9 said, “I think it’s important to ask the Chinese side what they—how they would define this expression …”

The official continued, “We already understand the Chinese side has an interest in realizing a new type of relationship. But the key for us is to find a way to do that and to build confidence between our two sides.”

Fu Ying, the speaker for the National People’s Congress, spoke about the New Model at the Brookings Institution, a large think tank in Washington, last month, but did not seem to instill much confidence.

The event was slotted between the Xi–Obama desert summit held in California in early June and the current dialogue in Washington, and was titled, The U.S. and China: A New Kind of Great Power Relationship?

When Chris Nelson, an Asia policy analyst who runs a newsletter for the Beltway crowd called The Nelson Report, asked about China’s behavior in the South China Sea, he said the answer he received was “very chilling.”

Nelson had asked whether it may be time for the Chinese side to engage in a dialogue with countries in the southeast Asian region that it is currently engaged in vigorous maritime disputes with, in an effort to relieve tensions in the South China Sea.

Fu Ying did not answer the question, Nelson said in an interview afterward, instead simply reiterating the right of the PRC to assert its sovereignty over the disputed waters. “She simply repeated the hardline stance that I had asked whether they were going to have a dialogue about,” he said, before calling it “chilling” because of the dangers for the disputes to escalate as the PRC refuses to acknowledge that there even is a problem.

Such wiles are to be expected from an adversary, but seem hard to square with the stated U.S. and Chinese aspiration to have a relationship built on trust.

“We have to trust,” said Vice President Joe Biden at the opening dialogue on Wednesday. He added that the relationship would always be characterized by both competition and cooperation, but that the “mistrust and suspicion” in the bilateral relationship was not healthy.

Mutual trust is a cornerstone of the new model of China–U.S. relations, according to Chinese propaganda, but its apparent demands on the United States—hinted at, but never articulated too clearly in Chinese source materials—are at odds with what Washington wants from the relationship, according to Peter Mattis, who edits the Jamestown Foundation’s China Brief.

“Overall,” he writes in China Brief, the message “appears to be that Washington needs to accommodate China’s rise without reciprocal Chinese concessions to similarly long-standing U.S. principles and policies.”  The U.S.’s acceptance of the New Model of relations, Mattis writes in the National Interest, would mean that it needs to abandon its commitments to Taiwan, human rights in China, and alliances in the Asian region, along with other concessions that Washington would likely find “unpalatable.”

These are the demands implicit in the New Model, which the Chinese delegation at the Strategic and Economic Dialogue said is a focus of the talks, and which it has reached a consensus on with the United States, and is now simply trying to figure out how to implement with “real, actual results.”

The U.S. side, on the other hand, seems blithely unaware.