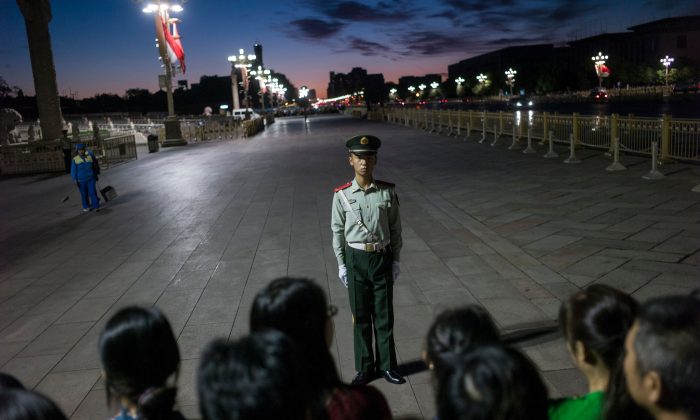 A paramilitary guard stands in front of a crowd at Tiananmen Square in Beijing on Sept. 20, 2017. (Fred Dufour/AFP/Getty Images)
Chinese Regime

The Chinese communist regime’s minister of Industry and Information Technology was suddenly removed from office. Multiple news outlets said that before he was taken away for investigation, he tried to commit suicide, and his sudden removal from post might have something to do with different corruption cases.

On July 28, the regime’s Central Commission for Discipline officially announced that Xiao Yaqing was taken down from his Minister’s post for investigation for “violation of disciplines and law.” However, the official report did not mention the cause of his removal.

Xiao was not included in the official representative list of the upcoming CCP 20th Party that was publicized on July 27. He was also absent from the provincial governors’ and ministerial level officials’ special seminar on the same day, according to the CCP’s mouthpiece media CCTV.

Xiao’s last public appearance was on July 6 when he hosted the 8th Meeting of BRICS Communications Ministers.

Hong Kong media “Ming Pao” reported on July 29 that Xiao’s sudden dismissal may be related to his involvement in the corruption case of the state-owned Aluminum Corporation of China Limited. There were several other employees of the company taken away for investigation the same time. Xiao was the head of the company for 5 years in the 2000s. It also reported that Xiao was taken away by the CPC Central Commission for Discipline Inspection from his Beijing residence on July 26. Before being taken away, Xiao allegedly attempted to cut his wrist to commit suicide.

However, the CCP hasn’t officially announced any details of Xiao’s case.

Xiao is the first minister-level official being taken down and investigated this year, as the CCP’s infighting intensified before the upcoming Party congress in the fall.

It followed the removal of Gao Fu, the head of China’s CDC, on July 26. Gao was blamed for mishandling the initial outbreak of COVID-19 in Wuhan, when he told the public that the disease was preventable and curable and no need to take measures and continue to celebrate the Chinese new year as planned, while the outbreak was already quickly spreading in the city.

In the official notice of Xiao being taken down, it only said that he “violated disciplines and the law” instead of “serious violation of disciplines and law”. He was still addressed as “comrades” in the notice.

Peng Xinlin, a professor at the School of Law of Beijing Normal University, told China News Weekly that such wording showed that the authorities may give Xiao the Party’s disciplinary punishment and removal from official position but not charge him with criminal offenses.