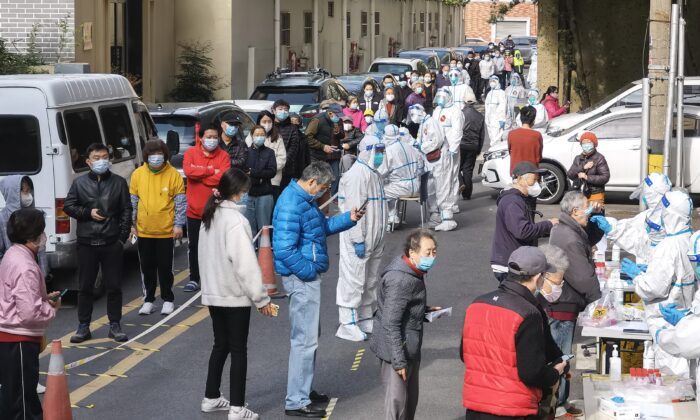 People line up for nucleic acid testing for COVID at a residential block during a citywide COVID-19 testing campaign on April 1, 2022 in Shanghai, China. (Zhang Suoqing/VCG via Getty Images)
INSIDE CHINA

Recently, the Chinese Communist Party (CCP) announced plans to require cities with at least 10 million residents to set up testing booths within a 15-minute walk of every resident.

However, experts warned that China’s medical waste, which has already surged to an unprecedented level, could become a potential source of secondary infection that threatens both the population and the environment.

Luo Hailin, the Deputy Director of the Shanghai Ecology and Environment Bureau, recently revealed that the city has disposed of about 68,500 tons of medical waste since March 1st.

“The highest was at 1,400 tons per day, which is six times that of the usual,” said Luo at a press conference on May 24.

This figure was similar to that reported by the CCP’s state broadcaster, China Central Television (CCTV), which claimed that medical waste generated in Wuhan had increased sixfold during the first three months of COVID-19 in a Mar. 30, 2020 documentary.

In an interview with Agence France-Presse (AFP), Li Yifei, an environmental studies expert at New York University Shanghai, warned that the amount of medical waste being generated on a routine basis in China is at a level “unseen in human history.”

According to an article titled, “China’s Mass Testing Mantra is Building a Waste Mountain,” published by Voice of America, massive medical waste generated as a result of the CCP’s zero-COVID and other extreme mobilization policies has become a burden for the local economy and poses a threat to the environment and human health.

Li Yanming, a U.S.-based China affairs commentator, told The Epoch Times that medical waste could severely damage the environment and human health if it isn’t disposed of properly.

Furthermore, Wang, a head nurse at a hospital in Tianjin, told The Epoch Times that medical waste is divided into five categories: chemical, physical, pharmaceutical, pathological, and that sharps, and inadequate incineration will release toxic organic compounds into the air that become secondary air pollutants.

Yang Guiyuan, who holds a doctorate in medicine from what was formerly known as the Guangzhou First Military Medical University, told The Epoch Times that medical waste disposal has sophisticated procedures and strict standards, which is why it is listed at the top of China’s 2021 National Hazardous Waste Inventory.

However, according to the article titled, “Medical Waste Surges Sixfold, How to Properly Dispose of It,” published by CCP outlet People’s Daily on June 20, it is typical for “big whites,” a nickname given to China’s COVID-19 policy enforcers, to discard used protective equipment and test kits in residential garbage cans. Additionally, gathered medical waste was often not collected for a prolonged period.

The article also noted that roughly one ton of medical waste is generated for every 200,000 COVID-19 tests done, which, under the scheme of the CCP’s zero-COVID strategy, translates to thousands of tons of medical waste produced daily nationwide.

In a March 2019 documentary, state-run television network CCTV revealed an underground network in which recycled medical waste was illegally sold and used to make disposable cutlery and children’s toys.

According to the documentary, plastic pellets, crushed and broken down from used solution bags, blood bags, and other medical waste without a sanitation process, were used by manufacturers to create products like cups, bags, buckets, boxes, and toys.

Due to their low cost, these goods are preferred by retailers and restaurant owners throughout China.

However, Sunday Kiss, one of the most popular parenting platforms in Hong Kong, warned of the potential biohazards associated with improper recycling of medical waste.

“It could contain harmful chemicals, radioactive waste, and pathogens up to a thousand times more than typical household garbage,” the article noted, “It’s very likely to transmit diseases without a proper sanitation process.”