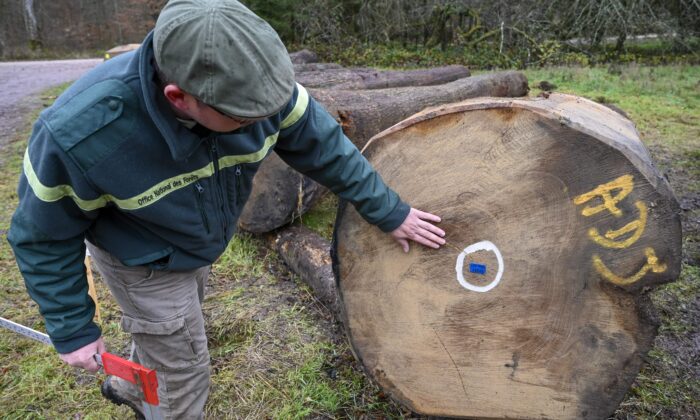 Kathleen Li
Kathleen Li has contributed to The Epoch Times since 2009 and focuses on China-related topics. She is an engineer, chartered in civil and structural engineering in Australia.
View profile
Follow
and Anne Zhang

China’s recent years of dramatically purchasing log material have caused a survival crisis in the wood processing industries in many countries. French wood manufacturers have launched a petition calling on the EU to restrict the exportation of log material.

“It’s time to wake up to the fact that European sawmills are now facing closures and liquidation if nothing is done to stop the hemorrhage that is taking place before our eyes,” states the “Stop Log Exports” petition, launched by French wood manufacturers.

“The log supply crisis is already threatening downstream lines such as industry, crafts, construction, and logistics, which have to rely on imports from outside Europe due to a lack of raw materials.”

“All the qualities of logs … even industrial logs for panels and paper are leaving by the shipload,” the French wood manufacturers said in the petition.

A photo of a truck with “CHINA SHIPPING” written on the side is posted on the English page of the petition website, which likely indicates that communist China is the main concern.

More than 13,000 companies, including 600 in Poland and 200 in Germany, have signed the petition in less than one month.

Between January and May 2021, China imported over 205,810 tons of French oak logs and over 303,600 tons of softwood logs, an increase of 42 percent and 66 percent respectively compared to the same period in 2020, and more than 80 percent of logs exports in the five months were from French private forests, according to the National Wood Federation.

As early as 2018, discussions began to circulate in France about China’s massive purchases of oak logs. About 20 percent of the oak produced in France was exported to China, bypassing local sawmills and threatening the local wood processing industry’s 26,000 jobs, reported France24 in July 2018.

Shawn Lin, who worked in the international transportation industry, including log transportation for more than 10 years, told The Epoch Times that “A tree grows into lumber takes 20-30 years, even more, but it only takes a few minutes to cut it down, so logging does not create much profit.

“If the CCP buys raw logs, it means that the whole processing industry will be taken to China, and the local workers no more have jobs to do,” he continued.

French wood manufacturers warned that the CCP’s (Chinese Communist Party) massive purchases are a strategic plundering and destruction of resources. “This economic and ecological aberration must stop now,” said the petition.

French wood manufacturers are worried that the sawmill industry is in “mortal danger,” according to the petition. They said that the export of raw materials ensures European industries a strategic and priority supply, but “The services of the Member States and the representatives of the European institutions have been letting this toxic trade take hold for 10 years. We now are on the edge of the cliff.”

“Have we learned nothing from the episode of COVID masks and vaccines?” they asked in the petition.

They are referring to the CCP virus (the cause of the COVID-19 disease), which originated from Wuhan, China, and exploded around the world. In anticipation of a global outbreak, the CCP raided the world for basic epidemic prevention supplies such as protective masks and medical clothing, creating the global supply crisis. According to data by Chinese customs, 2 billion masks were imported in five weeks from January last year, equivalent to two and a half months of global production; and about 400 million sets of other protective equipment, such as medical goggles and protective clothing, were imported, reports The New York Times.

According to CCP state-run Renmin media, as early as 2017, the China State Forestry Administration confirmed a three-stage approach to completely stop commercial logging of natural forests, including state-owned forest areas such as the Inner Mongolia District and Jilin Province.

China’s policy on raw materials is to “put both ends outside, big in and big out,” which means to “seek raw materials and sales markets outside the country and to vigorously develop processing industries with the goal of exporting to generate foreign exchange,” according to an Oct. 22, 2012 article published on the official website of the China Economic History Forum.

The massive export of logs has affected likely more than just sawmills and France. For example, the price of oak barrels imported to Australia from France jumped to around $1,530 due to the limited supply of raw French oak. In addition, some top wineries in California and Chile will also be affected, said The Drinks Business website on Aug. 16.

According to data from the New Zealand Ministry for Primary Industries, forestry is the third biggest export, earning more than $6.7 billion a year.

The majority of New Zealand’s timber exports are raw logs, with 70 to 80 percent of them going to China. From 2008 to 2021, New Zealand’s log shipments to China surged from 1 million tons per year to about 20 million tons, reported New Zealand local media Stuff, in March.

“[We] send so many raw logs to China without turning them into something more valuable,” Turner said, “This is a violation of our responsibility to future generations.”

However, Williams later said that the government would not interfere with timber exports. She said she had received suggestions that some suppliers would increase production of structural lumber and reduce exports in the next six months, according to Stuff in an Aug. 6 article.

Russia Imposes Tariffs on Timber Exports as a Protection Measure

Critics in Russia have accused the government of selling logging rights to Chinese companies at low prices, threatening the country’s economic development. These people also warn that China is protecting its own forest land while it is deforesting countries in South America, Africa, and Southeast Asia states an April 2019 article by The New York Times.

In 2018, a petition to Russian President Vladimir Putin called for a ban on timber exports to China and was signed by more than 520,000 people.

Russia is imposing export tariffs on unprocessed timber and will ban exports of softwood and high-value hardwood logs from 2022 onwards. On May 21, the Russian government decided to impose an export tax as high as 10 percent on sales of several kinds of Russian wood. On July 1, export duties were imposed on unprocessed timber with a moisture content exceeding 22 percent.

That is to “limit exports of rough unprocessed wood products, as well as to hold down the price for it in the domestic market … stimulate additional economic activity within Russia, and help to mitigate illegal logging,” reported Forest Economic Advisors.

China, as the world’s largest timber importer, also imports raw materials from Latin America, the Congo Basin in Africa, and Southeast Asia. “The immense scale of China’s sourcing … means that a significant proportion of its timber and wood product imports were illegally harvested,” said the Environmental Investigation Agency.