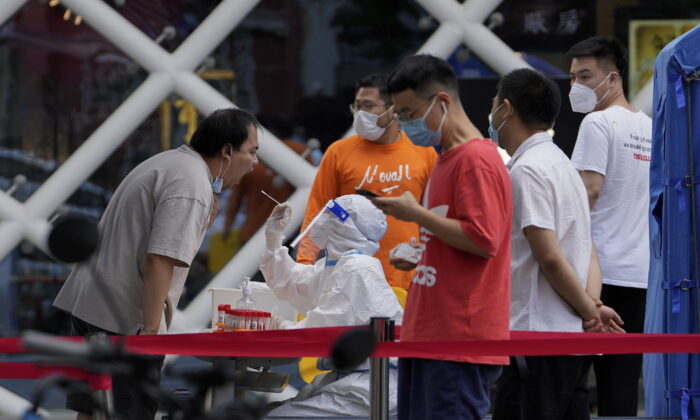 Residents get swabbed during mass COVID-19 testing in the Chaoyang District in Beijing on June 14, 2022. (Andy Wong/AP Photo)
INSIDE CHINA

A number of biotech companies have reported substantial profit growth for the first half of 2022. Among them, Tianjin City’s Jiu’an Medical Electronics Co., Ltd. posted a net profit of over 15.1 billion yuan ($2.24 billion), an increase of 270 fold from the same period last year.

Jiu’an Medical actually lost money in 2021, but the company realized exponential revenue growth this year by selling COVID test kits. In a performance report released on July 14, the company stated that its net profit in the first half of the year was expected to be 15.1 billion to 15.5 billion yuan ($2.24 billion to $2.3 billion). During the same period last year, the company had a net loss of $710,000. The profit growth this year would be 275 times if this year’s net profit ends up being $2.24 billion, or 282 times if the net profit is $2.3 billion.

Another medical testing company, Guangzhou-based Jinyu Medical Laboratory Group Co., Ltd., had a roughly 50 percent year-on-year profit increase in the first half of this year. The company’s 2022 semi-annual performance forecast said that it achieved a net profit of 1.55 billion to 1.68 billion yuan (about $230 million to $259 million).

Wuhan’s Mingde Biotechnology Co., Ltd. has also reported a strong profit gain with its increasing market share of nucleic acid testing reagents. The company released a performance forecast on July 15, predicting that the net profit in the first half of 2022 would be 2.4 billion to 2.75 billion yuan (about $356 million to $400 million), an increase of 314.11 percent to 374.50 percent year-on-year.

Similarly, Guangzhou Daan Gene Co., Ltd., one supplier of nucleic acid testing products, revealed in its semi-annual performance report that it is expected to achieve a net profit of 3.3 billion to 3.7 billion yuan (about $490 million to $539 million) attributable to shareholders, an increase of 106.52 to 131.56 percent over the same period last year.

Zhuge Mingyang, an independent writer, told The Epoch Times that behind those firms are interest groups of top officials from the Chinese Communist Party (CCP).

“They are the ones who make policies to enforce lockdowns and force civilians to take nucleic acid tests every three days. Who would benefit from these measures? The answer is obvious to all,” he said.

Qi Yue (pseudonym), a resident of Shanghai’s Jing’an District, told The Epoch Times on July 18 that parts of Shanghai have again been placed under lockdown.

“Shanghai has just been lifted after a three-month blockade, but now there are new rounds of lockdowns and nucleic acid testing,” Qi said.

“It’s such a pain for people to line up to do the tests in the summer heat. If you don’t do it, you cannot go anywhere, and you may even be detained,” he said.

“As long as the profit-making over nucleic acid testing remains, they will continue to exaggerate the harmfulness of the virus, and we commoners will never have peace.”

Yang Qi (pseudonym), a resident of Changsha City, Hunan Province, also criticized how some are making money out of the lockdowns.

“The testing companies are making a lot of money as a result of government power intervening in the economy,” Yan said.

“The epidemic is actually not as terrible as the authorities claim it to be. If the [political] system does not change, the authorities can always exploit social resources and social wealth as they please.”

Recently, Lanzhou, the capital of northwestern Gansu Province, ordered its 4.4 million residents to stay home starting July 13. In the resort city of Beihai, Guangxi Province, more than 2,000 tourists have become stranded, after the city suddenly became a virus hotspot.