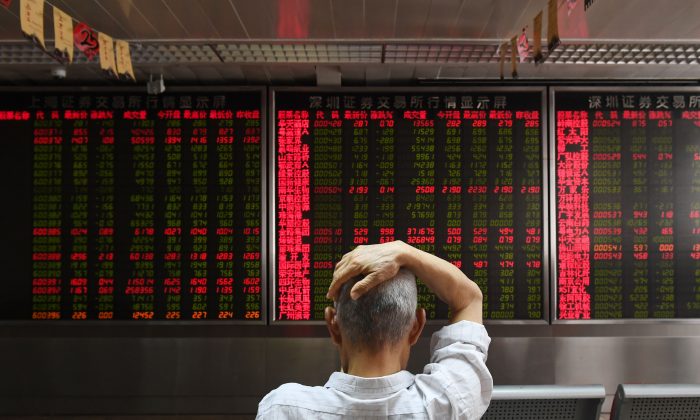 After China and the United States’ tit-for-tat tariffs officially went into effect on July 6, China’s investors are not optimistic.

China’s soymeal futures fell more than 2 percent on the afternoon of July 6—though most of those losses were recovered amid initial market confusion over whether Beijing had actually implemented the tariffs, which it later confirmed it had. China’s tariffs target American agricultural goods such as soybeans, wheat, sorghum, and fruits—threatening U.S. farmers in states that backed Trump in the 2016 U.S. election, such as Texas and Iowa.

Meanwhile, the Chinese yuan continued to fall against the U.S. dollar, closing at 6.648 by the end of July 6.

Investors have been selling out of specific sectors and stocks they believe are more at risk of being hurt by tariffs and buying others.

Since tariffs were initially announced by the Donald Trump administration in January, the six months of wrangling over trade negotiations have wiped out about a fifth of China’s stock market value.

The SSE50 Index, which tracks blue-chip shares, hit a 13-month low on July 5 and has slumped roughly 12 percent in the past two weeks.

Technical indicators, from margin lending for shares, to stock index futures, all point to a deeper slump in China’s stock markets.

Experts foresee the trade spats hurting China more the United States. “The impact of the China-U.S. trade dispute will be bigger on China due to the structure of its economy and the high reliance on exports,” said Cheng Gong, chief researcher at Anbound Consulting, a Beijing-based think tank.

Beijing-based economist and professor Hu Xingdou concurred, in a July 6 interview with Radio Free Asia. “The United States mainly gets cheap goods [from China], and these can be obtained from Mexico, Vietnam, India, and other countries.”

He added that the looming possibility of serious currency inflation posed a real danger to the Chinese economy. “On the one hand, due to the huge circulation of the currency, this will undoubtedly become the root cause of rising prices. On the other hand, the cost of living for citizens is also increasing, including water, electricity, and gas. Exports are now also facing obstacles, so China’s entire economy is experiencing a decline.”

President Donald Trump is already threatening additional rounds of tariffs, possibly targeting more than $500 billion worth of Chinese goods, which is roughly the total amount of U.S. imports from China last year.

Scott Kennedy, head of China studies at the Center for Strategic and International Studies in Washington, DC, predicts that such a scale of tariffs would “have a big impact for both countries.”

He added that the escalating fight between the world’s two biggest economies meant it could “take economic and political pain to get these two parties to the (negotiating) table.”

Chinese state media were firing all rounds to criticize the United States, with one July 6 editorial in the state mouthpiece People’s Daily discounting the United States’ accusations of China’s unfair trade practices. “A developed country that is the world’s most powerful can boldly claim that it has been bullied and taken advantage of in international trade—that is the most absurd and unimaginable thing,” it read.

Some Chinese netizens, on the other hand, expressed that they were supportive of the U.S. trade tariffs, hopeful that a trade dispute could potentially bring change to China’s trade policies. “Trump is helping his country and the people of China,” one netizen posted on Sina Weibo, a social media platform similar to Twitter.