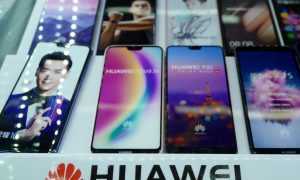 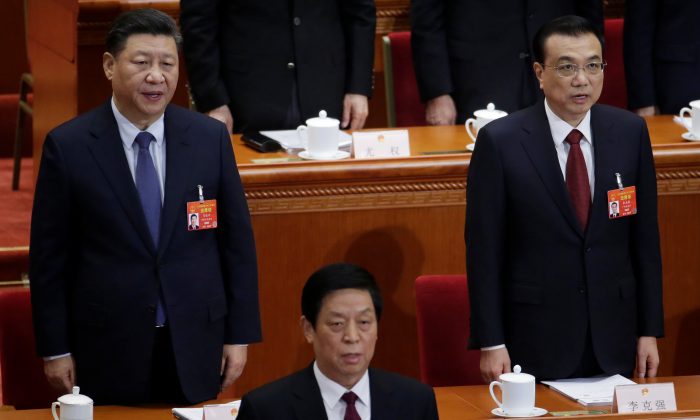 Chinese leader Xi Jinping, Chinese Premier Li Keqiang and Li Zhanshu, chairman of the Standing Committee of the National People's Congress (NPC), sing the national anthem during the opening session of the NPC at the Great Hall of the People in Beijing on March 5, 2019. (Jason Lee/Reuters)
Opinion

China’s ‘Made in China 2025’ Continues Apace

China’s plan to eliminate its technological competitors is a matter of policy, regardless of public relations efforts by the Chinese leadership to quell Western fears

Despite what Chinese leader Xi Jinping may say publicly to the world about dialing down his aggressive “Made in China 2025” plan, the program continues to go full steam ahead.

The brainchild of Chinese Premier Li Keqiang in 2015, the aim of the program is for China to become the dominant manufacturing nation in the world in 10 key high-technology verticals, such as pharmaceuticals, artificial intelligence, and robotics, among others.

In a nutshell, the Made in China 2025 program is a process designed to transfer intellectual property (IP), manufacturing techniques, and research to China from the West.

Not surprisingly, China’s Made in China 2025 program played a big role in framing President Donald Trump’s perspective and helped shape his trade policies.

Trump campaigned for and won the U.S. presidency on a promise to push back against China’s unfair trade advantages and its rampant technological and IP theft against U.S. companies. In fact, Trump’s tariffs target the very same technological verticals in the Made in China 2025 plan.

In response to Trump’s trade policies, which not only include tariffs but other punitive actions, China has shifted its soybean purchases to Brazil and moved the manufacture of some consumer products to plants in other countries, such as Mexico, Vietnam, and Serbia. Other foreign manufacturers are also leaving China. That could certainly pose problems for China in the long term.

To counter the perceptions its own claims about the Made in China 2025 caused, China has launched an aggressive public relations campaign. Xi has very publicly promised that China would allow Western companies greater access to the Chinese market as well as make efforts to protect the intellectual property of foreign firms operating in China, especially that of U.S. companies. He also has promised to cut tariffs on U.S. cars to 10 percent from 40 percent, and to once more buy American soybeans.

But will China really open up its market to U.S. competition? Will it stop its practice of IP and technology theft? Will Trump be able to fundamentally shift China’s Made in 2025 plans in a similar way to how the United States was able to counter Japan’s adversarial trade in the 1980s?

The answer to all these questions is, “No.” There are some very good reasons why.

China’s Economy Is Built on Theft

At its core, the Chinese economy is founded on graft, theft, and horrific violence. From 1949 to 1979, China’s economy was based on the state stealing the meager fruits from the labor of the Chinese people—and killing tens of millions of them in the process. Once China invited Western companies to make goods there, China’s economy continued to steal from its own, but expanded its scope of theft to stealing capital, technology, IP, even whole manufacturing plants from Western companies.

This is one of the main reasons, by the way, that Chinese legal system is so weak, corrupt, and unaccountable. Such a legal system is necessary for widespread theft and graft to occur and thrive. These are the essential aspects of the Chinese economy and its trade and monetary policies, and they’ve resulted in the China “economic miracle” that the top 20 percent of China’s people enjoy today.

China has gone from a dirt-poor, communist hellhole into a major global economic power in less than 40 years—why on earth should they change the very policies that got them there, even if they could?

They can’t and they won’t.

What Worked With Japan, Won’t Work With China

From an economic policy and structural perspective, there are some striking similarities between the two nations. For instance, China has taken a page out of Japanese adversarial trade policies book from the 1980s. In those years, Japan aggressively undercut U.S. car and electronics companies in cost and met or beat them in quality.

In doing so, Japanese adversarial trade policies were instrumental in eliminating thousands of automotive and electronic manufacturing jobs across the country, contributing to the Rust Belt that still exists today.

Both Japan through the ‘80s and China since then have relied on skewed trade relationships with the United States that include high tariffs and closed markets against U.S. goods to grow their economies. And, both countries have a comparative disadvantage in natural resources. Both economies are more state-driven than the U.S. market economy, although China much more so than Japan.

But there are critical differences between Japan and China as well, which make applying the same pressures that worked with Japan less likely to work with China. One big difference is that China isn’t dependent upon America for its security. On the contrary, it is a geopolitical, economic and military adversary of the United States. The security dimension was a very important factor in Japan’s decision to acquiesce to U.S. trade policies. China isn’t bound by such concerns.

Furthermore, China relies less on exports to the U.S. alone to drive its economy, enjoying deep trade relations with the European Union and other economies throughout Asia. Also, China controls its currency to a much greater degree than Japan did and does, shielding it somewhat from market forces.

But not all of China’s factors are in its favor. Unlike Japan’s homogeneity, China is an empire over large populations with vastly different cultures, value systems, histories, characteristics, and aspirations. The continual suppression of hundreds of millions of people is expensive, as well as a politically dangerous undertaking. Even its own population is bristling at the yoke of subjugation by the Chinese Communist Party.

Coincidentally, like the Japanese, China’s population is aging, foreshadowing a growing demand for social services while its debt-to-GDP has exploded to a 2.5:1 ratio. Japan’s debt-to-GDP ratio was about 0.50:1 in 1992, at the beginning of its two-decade recession and has hovered around a 2:1 ratio since 2012. Thus, China will face its own debt crisis at some point.

China’s drive to achieve supremacy while it has the chance to do so is fueled by all of these factors and more.

No Real Resolution in Sight

No one truly expects the Chinese to give up their “State Capitalism” model of development. After all, it’s transformed the Chinese economy and taken millions of jobs from the United States and Europe. U.S. Trade Representative Robert Lighthizer concluded as much in a recent report. In other words, regardless of what China says, it is pursuing its Made in China 2025 program as aggressively as before.

Should it be successful, China will drive many tech firms out of business by undercutting U.S., European and Japanese manufacturers. This would result in chronic underemployment and potentially an insurmountable technological advantage that would fuel their global expansion, at the expense of U.S. power and influence. In every respect that matters, the Made in China 2025 plan is effectively a declaration of war against Western economies, especially the United States.

In other words, it’s an act of war without the firing of weapons—at least, not yet.