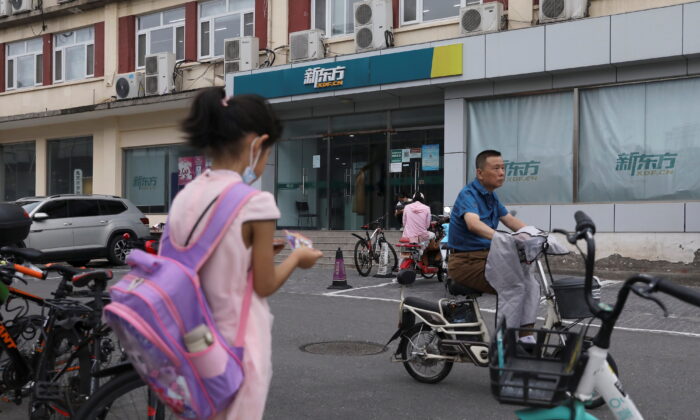 China’s education industry was dealt a heavy blow when Chinese authorities announced a policy of “double reduction” in education in July. As part of that, New Oriental, the country’s largest education provider, stopped teaching supplementary courses in K-12 education. In order to survive, the company looked for other means to make a living, including overseas online Chinese courses and live commerce.

Chinese media recently discovered that New Oriental is now offering online Chinese language courses in the United States, which the company has confirmed. The project was launched as early as August but only attracted media attention recently.

The online Chinese language course, called “Blingo,” is mainly aimed at Chinese children and teenagers outside China, according to people familiar with the matter. The teaching content is based on Chinese Proficiency Grading Standards for International Chinese Language Education as issued by the regime’s Ministry of Education in March.

New Oriental was founded in Zhongguancun, Beijing on Nov. 16, 1993. In the midst of a wave of Chinese students going abroad, New Oriental quickly became the largest TOEFL and IELTS training institution in China. Since then, its business expanded to include English training, K-12 extracurricular tutoring, test preparation courses, and adult language training, which made it the largest education support organization in China and the first Chinese education company to go public in the United States.

However, on July 24, the Chinese authorities announced the “double reduction” policy which resulted in reductions in the total amount and time of school homework and after-school training programs. The authorities also began to restrict tutoring hours for K-12 students and require subject-based tutoring to be registered as non-profit organizations, causing a huge impact on the tutoring industry.

New Oriental announced in September that it would stop its offline business—in-person classes—for primary and secondary school courses after the fall season and give up its lease of teaching sites in cities. Its online education website announced on Oct. 25 that it would end its services for kindergarten through to grade 9. Yu Minhong, the founder of New Oriental, revealed that the company has planned to cut 40,000 jobs.

In his first Tik Tok livestream on Nov. 7, Yu revealed that New Oriental will close nearly 1,500 teaching centers and donate 73,000 sets of gently used desks and chairs to rural schools.

On Dec. 1, a New Oriental employee confirmed to The Epoch Times that the company has completely stopped providing tutoring services for primary, middle, and high school students, but they are still providing training for IELTS, TOEFL, oral English, and other minor languages for overseas study. If someone has paid to register for a course before, he can apply for a refund.

“The government did issue this regulation. No one dares to continue the tutoring service now. We do not have a specific solution, so all the teachers for primary and secondary school tutoring have left, literally all of them,” he said.

New Oriental has been looking for ways to survive since Beijing implemented its “double reduction” policy. On Sept. 25, Yu Minhong announced that the company would upgrade college student services, including projects such as postgraduate entrance examinations, going abroad qualifying examination, teacher certification, and accounting. The company has likewise planned to expand its education and training programs such as computer science examinations for different levels of certificates.

In a live broadcast on Nov. 7, Yu announced that New Oriental planned to start a live commerce business focussing on farm produce sales.

According to China Economic Net, New Oriental set up Oriental Best (Beijing) Technology Co., Ltd., which has a business scope that includes selling fresh meat, eggs, aquatic products, fresh fruits, and vegetables. However, the day after Yu announced that he would soon be selling farm produce through live commerce, his TikTok studio was suspended.

In an interview with The Epoch Times, political commentator Tang Jingyuan analyzed that on the surface, the “double reduction” policy is intended to reduce the burden of primary and secondary school students and parents, and to “even out the rich and the poor” in the field of education.

However, it can hardly solve the fundamental problem in practice.

The vicious competition caused by China’s exam-oriented education system will force students to seek additional educational resources in order to “not lose at the starting line.” As a result, the gap between the rich and the poor will only be exacerbated, as low-income families have lost relatively inexpensive tutoring resources.

According to a lecturer at a university in southern China, the “double reduction” policy is a good thing on the surface, but if the regime’s education model and entrance examination system does not change, parents will secretly seek private tutors.

The lecturer, who chose to be anonymous, told The Epoch Times that in actuality, not many students really need tutoring. Out of 100 students, only a dozen may need tutoring, but parents feel the pressure to compete with each other. If one child goes to extra classes, other parents will think their children should also go, and it gradually becomes a culture. He believes that character education and the individualized teaching of students according to their abilities are the most important.

When asked about the underlying reasons for Beijing’s crackdown on the tutoring industry, Tang said that “reducing the burden” of students is only a secondary reason. The real underlying reason is to tighten the ideological field and fill the loopholes of tutoring institutions compiling their own teaching materials or even borrowing from foreign teaching materials. As for how the unemployed in the industry can continue to live, it is not a priority concern for the Chinese Communist Party at all, he said.

But as China’s largest educational institution, the situation of New Oriental is relatively optimistic because it still has training for those who plan to go abroad. However, other educational companies such as Tomorrow Advancing Life and Gaotu Class, which rely entirely on K12 education, face “extinction.”