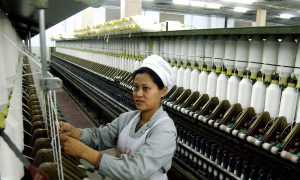 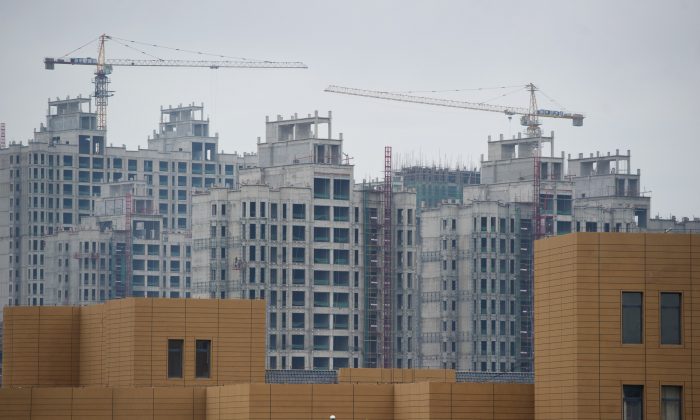 A photo taken on Aug. 18, 2012 shows ongoing construction in the inner Mongolian city of Erdos, in spite of the difficulty the city has had filling office and apartment buildings already built. Recent financial difficulties have caused Erdos, formerly known as a “ghost city” to become known as a “debt city.” (Ed Jones/AFP/GettyImages)
China

Cash-starved local governments, cash-rich state-owned enterprises, and banks’ too loose credit policies are fueling speculative land buying in China despite what everyone knows: This bubble is going to burst.

This situation is made more dangerous by the economy’s overall performance. The market expects that China’s GDP growth rate will drop by 2 to 3 percentage points this year. With growth slowing, overcapacity has been found in many industries, whose products cannot be sold, and income has been reduced. Companies cannot pay back their loans, and bank’s bad debts have increased.

Yet, within this context of contraction and possible economic failure, the total amount of land sales during the first half of this year is already equal to the entire amount of last year’s sales.

The real estate bubble has largely been fueled by the rising cost of land. With the increased cost of construction, real estate prices have also gone higher and higher. Land prices account for about 40 percent of home prices.

The biggest beneficiaries of land price increases are China’s local governments at various levels. Since 2007, the land transfer income has been included in the budget of local governments. The income of selling the right of using land through the government relinquishing its claim to it has made up more than 30 percent of local fiscal revenue, and the percentage has increased every year. In some places the percentage even reached around 50 percent.

In 2010, China’s local government debt reached 10.7 trillion yuan (US$1.74 trillion) according to the National Audit Office, while China’s former Minister of Finance, Xiang Huaicheng, estimated it was 20 trillion yuan. In other words, local debt equaled 20 to 30 percent of China’s GDP.

Central Bank governor Zhou Xiaochuan pointed out at a conference in March of this year that “about 20 percent of local debt is actually quite dangerous because these places do not have any revenue.”

Many local governments have been taking on new debt to pay the old debt. About one third of local debt is used to pay off old debts.

National Financial Weekly reporters went to the city of Erdos, a white-elephant construction project in Inner Mongolia, to investigate and learned that Erdos’ arrears have reached 240 to 400 billion yuan (US$39-65 billion), but its annual revenues are only 37.5 billion yuan (US$6.1 billion).

The local government not only cannot afford to pay its debts, but is also not able to pay the salaries of civil servants. Dongsheng District of Erdos borrowed 1.5 billion yuan from Yitai Group during last year’s Chinese New Year to pay government officials’ wages. Erdos used to be called a “ghost city” for some time because of its high vacancy rate; now it’s also known as “debt city.”

When economic conditions are good, local governments have ample tax revenue, and they make large profits especially from selling land. During such times government agencies and staff are increased, leading to more expenses.

In a slowing economy, local governments feel intense pressure, being suddenly faced with the reduction of the tax revenue that they’ve become accustomed to. In this situation, selling land has become the most practical and effective source of generating income.

Bidding Up the Price

One reason land prices are so high is that they are controlled by the state. China’s law stipulates that all land is owned by the state, and the state has the right to decide its value. The value of land is thus directly connected to a local government’s income.

The simultaneous strengthening of the state-owned sector and weakening of private sector have also helped contribute to the growth in land prices.

In the past, private enterprise represented the majority of bidders at land auctions. The situation has changed in recent years, and state-owned enterprises, especially large ones affiliated directly with the central Communist Party regime, have become the majority of buyers.

Moreover, the excessive credit offered by China’s banks through risky financial instruments has aggravated China’s real estate bubble. Since last year, real estate investors have raised gigantic amounts of capital through various financial products such as credit loans and trusts. When this money was injected into the real estate market, it accelerated the inflating of the bubble and created more and more “land kings.”

A typical example is the Thaihot Group, a Fujian Province-based enterprise, which engaged in aggressive financing of lavish land purchases in the first half of 2013.

According to statistics accumulated by the mainland China financial website 21cbh.com, Thaihot Group’s land purchase expenditure for the first half of this year amounted to 9.32 billion yuan (US$1.52 billion).

Considering that 2012 annual revenues were 2.6 billion yuan (US$423 million), the ratio of debt to revenue is huge. The company also has costs in the form of interest payments of 1 billion yuan (US$163 million) each year. The degree of risk is obvious.

Nowadays, many real estate companies are re-investing their profits in land purchases. A lot of companies in other industries are also seeking investment opportunities in real estate through financial products offered by financial institutions.

The situation is becoming ever more perilous. When nobody buys the houses, real estate prices will collapse, which will trigger a serious financial crisis.

Everybody knows it just a matter of time until the bubble bursts. When Japan’s real estate bubble burst, it sent the country’s economy into a two-decade-long depression, from which it still has not recovered.

The real estate bubble in Erdos is already bursting—prices have plunged by 70 to 80 percent. How many cities in China will run into a similar crisis? Will the bursting of the bubble spread across China’s real estate market like the propagation of a virus?