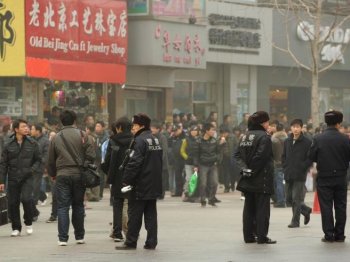 Police keep watch along the Wanfujing shopping street in Beijing after protesters gathered on February 20, 2011. A website claiming to represent China's homegrown Jasmine Revolution has called on the populace to take to the streets, every Saturday at 6:00pm. (Peter Parks/Getty Images)
China

A website claiming to represent China’s homegrown Jasmine Revolution has called on the populace to take to the streets, every Sunday afternoon.

They sign their posts with “Chinese Jasmine Revolution Initiators,” and give regular updates with ultra-specific instructions on locale, protest etiquette, and an evolving political stance.

They say that everyone should simply turn up and walk around, smiling.

The impact such actions may have is ambiguous, say dissidents and observers.

“I see it as a small activity,” said China scholar Perry Link in a phone interview. “Staying on the move prevents police from forcing you to go on the move. I think that’s the reason they walk around. But I don’t feel this is the big question,” he said.

The calls for smiling walkers to take to the streets began on Feb. 28. In their statements the initiators list 41 cities and protest sites—in the city of Lanzhou it’s by the Kentucky Fried Chicken at Dongfanghong Square, for instance. The Internet posts cast a wide net for “all social groups” to walk around together and by doing so “change your country!”

Organizers liberally ridicule the communist leadership and their moribund sloganeering. They say in their recent announcement that the movement should be codenamed the “Three Represents,” which makes fun of the theoretical contribution to Chinese communism of former regime leader Jiang Zemin .

They write that their call comes at “the best period of human rights in Chinese history,” which ridicules statements made by the communist leadership when deflecting criticism of their human rights record.

Dissidents are still not sure what to make of it.

“The situation is pretty complex at the moment,” says Wei Jingsheng, a prominent Chinese dissident now living in Washington, D.C. “A lot of people don’t know, and even we don’t know what this is about. We don’t know if it’s a trap or not.”

Since the uprisings in North Africa and the Middle East, there have been numerous, uncoordinated calls for protests in China.

Anonymous instructions given on the Internet led on Sunday, Feb. 20, to small gatherings of protesters in major Chinese cities.

Participants were asked to congregate in central areas and chant slogans. These instructions and other details were thought suspicious by some dissidents, who saw the event as an effective means for the CCP to arrest people. A large number of dissidents were arrested before the protests were scheduled to take place, and there were several reports of dissidents being beaten.

While the current calls to simply walk around smiling are unlikely to be a trap, some fear it may trivialize the revolution theme.

“It could be turning a real protest movement into a joke. As soon as the news of [the] Jasmine Revolution came out, the CCP moved extremely quickly,” Wei said. “In the past they’ve turned what was something more serious into something softer, something that can’t be a challenge.”

The website says that the calls to stroll are meant to inspire democratic sentiment, secure the release of high-profile dissidents, return rights to the people, and waste state resources.

Next: Wasting state resources while strolling around smiling