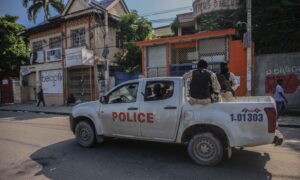 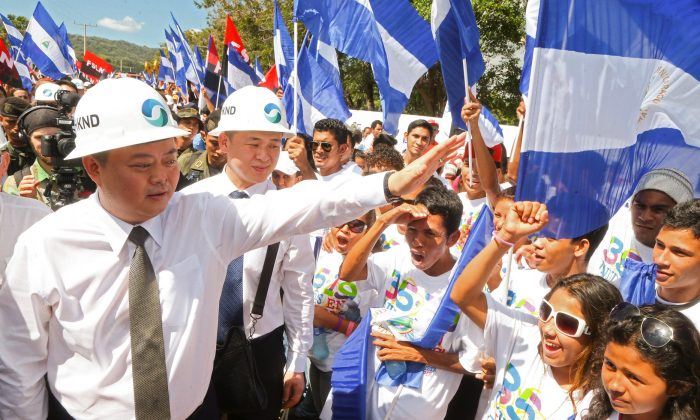 Chinese businessman Wang Jing (L) of HKND Group greets locals during the inauguration of the Nicaragua Canal in Tola, Nicaragua on Dec. 22, 2014. The canal project, with US$50 billion invested by the Chinese, is an ambitious rival to the Panama Canal. (Inti Ocon/AFP/Getty Images)
Americas

China’s Investments in Latin America Could Turn Into Military Assets Against US, Says Expert

WASHINGTON–China’s rapidly growing economic influence and frantic purchase of infrastructure in Latin America could be readily turned into critical assets to be used against the United States in the event of a military conflict, according to a researcher studying China’s involvement in the region.

Latin America has increasingly been an important focus of China’s attempt to build a foothold in the Western Hemisphere, said Evan Ellis, a research professor in Latin American studies at the U.S. Army War College’s Strategic Studies Institute.

Speaking at a Hudson Institute event on Oct. 18, Ellis said that while China’s stated goals and much of its observable activities in Latin America thus far have been focused on economic items, the sheer scale and extent of China’s involvement there could be motivated by military considerations.

Just as has been observed in Southeast Asia and Africa, China has been frantically purchasing infrastructure and other key strategic assets in Latin America in recent years, many of which were acquired through China’s state-owned enterprises, funded by the Chinese regime.

Using Brazil as an example, Ellis showed that China has acquired 87 large projects valued at $46.8 billion in the country, across all major areas of public and private sectors, including hydroelectric power plants, seaports, airports, agriculture companies, telecommunication companies, hospitals, and banks.

Ellis says that China’s expansion in Latin America should serve as a warning to U.S. national security decisionmakers. Once considered “America’s backyard,” Latin American countries are now gobbling up Chinese cash and giving away the ownership and control of their critical infrastructure and assets.

Everything China has acquired and sought to acquire in Latin America could be used against the United States “in the possibility of a conflict with China,” Ellis said. “If I was a decisionmaker of China’s People’s Liberation Army (PLA), I would start looking at a map [of Latin America] and start asking questions about what we can do.

“If we can’t get the Organization of American States to act on Venezuela given the ridiculous situation that’s going on there, how do we expect these companies and countries that are deeply involved with the Chinese to support the United States?” asked Ellis. Venezuela remains one of China’s closest allies, despite the fact that the country’s socialist economy has failed in recent years, causing a humanitarian crisis.

Ellis points out that China has defined its relations with many states it intends to court—of which there are seven in Latin America—as “strategic partnerships.” This term sounds like a mystery to most Western observers but is actually very significant. Argentina, Mexico, Brazil, Venezuela, Ecuador, Chile, and Uruguay are the Latin American countries on this list.

In 2016, while the United States was distracted by its own election, China silently upgraded six of these seven countries (all except Brazil) to the even higher category of “comprehensive strategic partnerships,” signifying that China now sees a much greater degree of strategic importance in its relations with these countries.

Ellis says that China’s strategic-minded purchases could let it get close to “ports of importation and points of sustainment in the United States that are remarkably close to Chinese-operated commercial facilities [in Latin America],” and that U.S. decisionmakers need to think about the potential implications of such expansions.

For instance, just 65 miles off the coast of the United States, Chinese companies have put in $10 billion in container facilities, logistic distribution facilities, air facilities, and even a $4.2 billion hotel in the Bahamas.

According to Ellis, China’s expansion in Africa provides plenty of clues to how it intends to utilize these assets once it establishes a big enough foothold. Using anti-piracy operations as a pretext, China has constructed a massive naval base in Djibouti in the Horn of Africa, which was formally opened in August.

“The rate at which China is acquiring and establishing these commercial bases [in Latin America], they can easily turn a nonmilitary base into a usable, military one,” Ellis said.