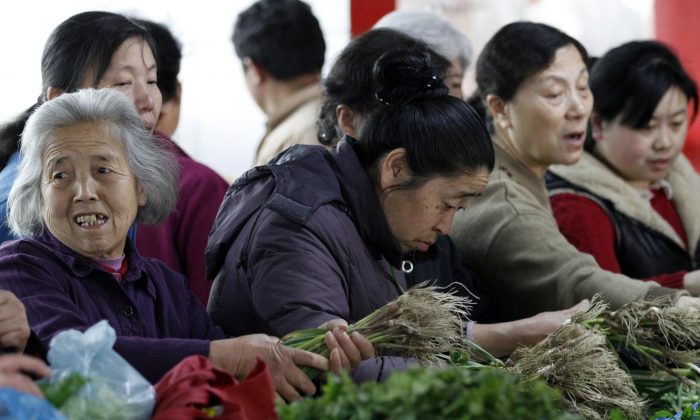 China’s consumer price index in November showed a 3 percent year on year increase, according to the National Bureau of Statistics of China. This is the third month in a row that the CPI has had a 3 percent increase, and the inflation is affecting the lives of the majority of the Chinese people.

The CPI of October and February reached the highest increases of the year at 3.2 percent. On average, the CPI from January to November this year increased by 2.6 percent.

Mainland experts are still optimistic of reaching the goal of keeping CPI increase under 3.5 percent this year which was set in China’s government work report early this March, according to Chinese official reports.

However, U.S.-based Chinese economist Cheng Xiaonong said the 3 percent increase of the CPI doesn’t represent the real effect on the the majority of the Chinese people.

“The consumption structures are different between social classes,” Cheng told Epoch Times in a phone interview, “Rich people spend more money for luxury goods, and so increases in the daily expenses don’t affect them much. But for poor people who spend their limited income mostly for food, the increase of food price affects them a great deal.”

“70 percent of urban residents spend most of their money for food,” Cheng said. “Such a huge price increase for vegetables and meat lowers their living standard by 20 percent. People who could afford cheap vegetables before can now only pick up leftover leaves in the market now.”

Beijing resident Mrs. Wu told Sound of Hope radio (SOH) that people face huge pressure due to the continuous price increases. “The prices seems to increase everyday. And it’s not a few percent of increase like what the government says, but multiples of increase, I feel.” Mrs. Wu said, “Everything increases except our wages. So sad!”

Mr. Zhu, who lives in Wuhan City, told SOH, “If you can survive in China today, you’re doing pretty well. Money is worth less and less here, and prices are increasing everyday. It’s overwhelming. One just waits to die.”

According to economist Cheng Xiaonong, the reason for high increase of CPI is due to massive of hot money—money that moves into a market for the sake of short-term profits—invested in China.

“Overall, the problem is how large the money supply has become. According to my research, the amount of money supplied by China’s central bank didn’t change much during the last three months. And the money in people’s hands even decreased. But there is one thing that Chinese government doesn’t want to mention, which is that corrupt Chinese officials have invested a large amount of hot money they own overseas back into China.” Cheng said. “That money has been invested in China’s real estate, which is why the housing prices in China’s big cities are still increasing.”

The state faces tough choices about how to handle housing prices, Cheng said.

“But if the Chinese government started to control the real estate prices, and the housing prices decrease a lot, the hot money will largely leave Chinese market, which will make the Chinese economy collapse,” Cheng said.

“The skyrocketing commodity prices are just the beginning,” Sun said, “and will continue.”

In a recently released report, China’s Price Monitoring Center of National Development and Reform Commission forecasts the inflation in 2014 will be higher than in 2013.