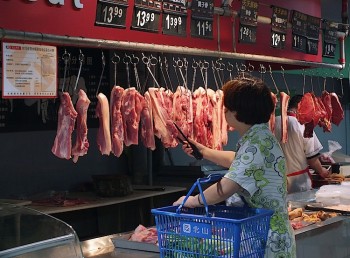 Inflation in China has continued its steep upward trend, and consumers are hard hit with food prices overall having increased 14.4 percent from a year ago. Grains rose 12.4 percent, eggs 23.3 percent, and pork soared a whopping 57.1 percent.

According to data released by China’s National Bureau of Statistics on July 9, China’s Consumer Price Index (CPI) surged by 6.4 percent from a year earlier, hitting a three-year high since July 2008.

To combat inflation, China’s Central Bank raised the benchmark deposit and lending rates by 25 points on July 6. It has also raised interest rates five times since October and raised the reserve requirement ratio six times this year. Yet inflation continues up.

Additionally, Chinese premier Wen Jiabao tried to assure the public that things were under control. “The overall price level now is within a controllable range and is expected to drop steadily,” Wen said in a June 23 article published by the Financial Times.

But a number of Chinese economists don’t think prices will come down any time soon, citing various reasons. Some also point out that the regime’s tighter monetary policies are having the adverse effect of forcing many small and medium sized businesses into bankruptcy.

Qi Yanchen, an economist in China, told The Epoch Times, “Consumer prices will continue to rise rapidly; so far there is no sign that prices will drop steadily.”

Qi criticized the regime for not taking effective measures to curb inflation. In particular, Qi pointed out the real interest rate still being negative compared to the inflation rate, which stimulates inflation.

According to data collected by the International Monetary Fund (IMF) for its 2007 Finance Statistics Yearbook, the percentage of taxes included in the cost of a product is higher in China than in any other developed country.

For example, an imported Swiss watch that is priced at 2,700 yuan (US$418) in China, includes a total of 58 percent taxes and tariff: 17 percent value-added tax, 30 percent consumption tax, and 11 percent tariff.

“With such high taxes, which double or even triple the annual growth rate of the GDP, how could China’s CPI not continue to soar!” Can An, a commentator with New Tang Dynasty Television said in a June 7 economics program.

If the regime fails to realize this, Can said, it might lead China’s economy in a wrong direction and even into stagflation, meaning inflation would continue to increase despite economic stagnation.

The inflation is fueled by higher costs of production, according to some specialists. Small and medium-sized businesses in turn are suffering as the regime’s tighter monetary policy is forcing them out of business.

Professor Kong Aiguo from the Department of Finance, School of Management at Fudan University told Taiwan’s Central News Agency, “The central bank’s raising interest rates is a case of treating the foot when the head is aching.”

To control inflation, it is most critical to control the price of consumer goods, Prof. Kong said. Combating inflation with tightening monetary policy has made it hard for small and medium enterprises (SMEs) to stay in business. “How do you expect those privately-run enterprises to survive?” he asked.

“It is increasingly difficult for SMEs to apply for credit loans in this credit crunch. I heard many companies’ capital chain has broken,” Prof. Kong said.

Although the regime has denied the growing bankruptcies of SMEs, according to a recent report by All-China Federation of Industry & Commerce, many SMEs in 16 provinces have gone out of business. In addition, many companies in the Yangtze River Delta have shut down or partly shut down, due to lack of finance, high tax burden, and increasing production costs.

Running out of Steam

China’s economy is now considered the world’s second largest, with Western nations and world media fixating their gaze on reports from the Chinese regime regarding annual rates of growth.

And while the latest release by the National Bureau of Statistics on July 13 stating an expansion rate of 9.5 percent for the second quarter was lauded by some media as “surprisingly robust,” international investor George Soros recently said, “China’s formula for steering the economy is running out of steam,” and China’s economy is “in a bit of a bubble.”

Soros commented that there are signs that China is “losing control,” and that “China has missed its opportunity to stem inflation and could now risk a hard landing.”

A hard landing refers to an economy that is rapidly shifting from growth to recession and is generally caused by government attempts to slow down inflation.