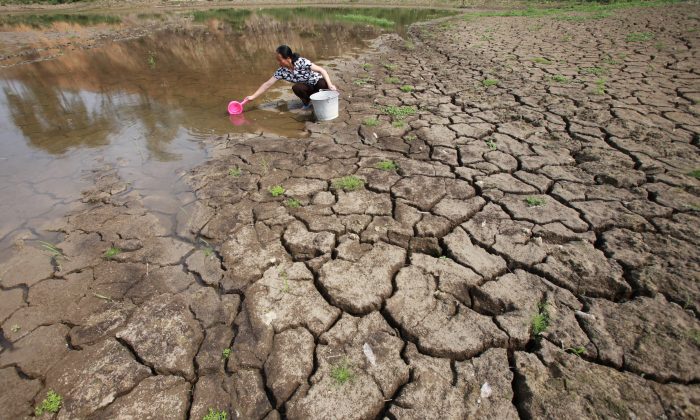 A villager gathers water at a dried-up riverbed, in the Guangxi region of China in May 2012. (ChinaFotoPress/Getty Images)
China Business & Economy

A power crunch and record heatwaves in China have disrupted factories, offices, farmlands, and many of the cities’ essential functions. Some subway stations are reportedly dimmed, with little to no lighting.

Dan Wang, chief economist of Hang Seng Bank (China) told CNBC that the power crisis and droughts would likely cause China’s GDP growth to fall below 3 percent, lower than the already reduced projection.

Since mid-July, China has been experiencing the most severe heatwave recorded since 1961, causing its electricity load to spike in order to meet air-conditioning demands. Rivers have dried up in the extreme weather, which has lasted more than 70 days. The southwestern province of Sichuan, which relies heavily on hydroelectricity and is China’s biggest hydropower producer, has fallen into a power and water crisis, with locals describing it as “worse than the pandemic.”

After issuing 14 red alerts, Chengdu, the capital city of Sichuan, on Aug. 25, downgraded the alert to orange. However, most manufacturers and companies are still affected by the power crunch.

At least 34 listed companies in Sichuan announced shutdowns around Aug. 15 due to the power crunch. An emergency shutdown notice issued by Sichuan Electric Power Company was also applied to companies on the “whitelist”—companies on critical industrial and essential supply chains.

Although the power outage reportedly ended on Aug. 25, many factories were still left in the dark and have yet to resume operations. Local reports indicated that some energy-intensive businesses were still off the grid on Aug. 28.

Henan Zhongfu Industry Co., a Chinese aluminum conglomerate, suspended production at its subsidiaries in Sichuan for about a week, from Aug.14 to Aug. 20. The production halt was estimated to have cost the company 12,900 tonnes of electrolytic aluminum and a net profit loss of about $11.7 million among its subsidiaries.

“China’s coal and power supply shortage has carried on since last year, and the problem will persist for a long time into the future. Last year’s soaring coal prices and power crunch have impacted its industrial production, and this year is looking even worse.” Jie Chao, a Japan-based current affairs commentator, told The Epoch Times.

“China’s zero-COVID policy has lasted for two years. The severe restrictions and lockdowns have paused raw material production and kept supplies at low levels. The country’s economy stumbled and fell into recession due to severe curb measurements.” Chao added that although China’s economy is currently in recovery, with fewer COVID-19 restrictions, power restrictions at this time will heavily impact the country’s GDP.

According to the CNBC report, last year’s power restrictions cut China’s GDP growth by about 0.6 percent. However, this year’s power crunch is reportedly worse, with a forecast of a 1.5 percent drop.

Wang said the current drought in China is quite severe and could last for two to three months. It is expected to negatively impact its energy-intensive industries, with a “knock-on effect throughout the economy and even to the global supply chain,” she said.

In the second quarter of this year, China’s GDP growth for farming, forestry, animal husbandry, and fisheries was 4.5 percent, much higher than the general industry’s 0.4 percent growth. However, the current widespread drought will disrupt crop growth and threaten livestock, significantly affecting the country’s food supply. Therefore, a much lower GDP growth this year for China’s agricultural industry is widely expected.

According to an article published on June 17 by the Shanghai Branch of the Chinese Academy of Sciences, extreme temperature significantly weakens crop yield. And that the impact worsens if heatwaves come in July or August, the grain filling period for regions in southern China and the middle and lower reaches of the Yangtze River. Grain filling is a critical component of crop yield.

The article cited an experimental rice field impacted by a 2013 heat wave, in which temperatures of 38 degrees Celsius (about 100 degrees Fahrenheit) persisted for more than 10 days. The rice settlement rate was less than 10 percent. This year’s weather has been even more extreme, with high temperatures lasting for more than a month, while in some areas, the temperature was above 40 degrees Celsius (104 degrees Fahrenheit).

For reference, crops have various heat tolerances—34 degrees Celsius for rice, 38 degrees for corn, and about 26 degrees for wheat, according to Lin Hong-Xuan, a Chinese researcher specializing in rice cultivation.

According to China’s ministry of water resources, the drought has affected around 2.46 million people and impacted about 2.2 million hectares of agricultural land in nine provinces.