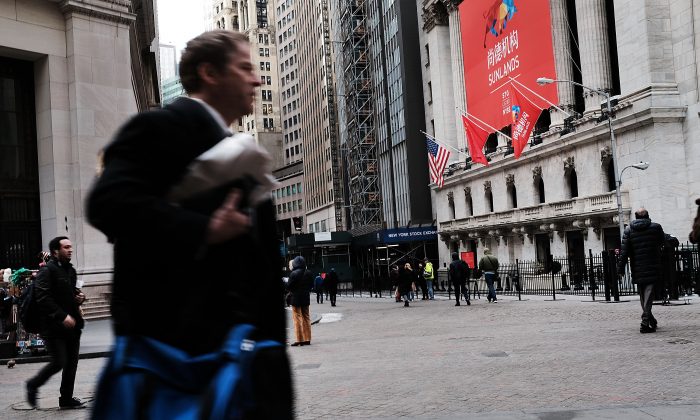 The New York Stock Exchange, with a Chinese national flag hanging in front, on the day of a Chinese company's U.S. IPO, on March 23, 2018. (Spencer Platt/Getty Images)
China Business & Economy

The stock of TAL Education Group, a New York-listed company that provides after-school tutoring for Chinese students, dropped more than 40 percent from June 12 to Sept. 7.

This is par for the course at Muddy Waters, known for its short calls on U.S.-listed shares of opaque foreign, mostly Chinese companies. The California-based investment firm made a name for itself after uncovering fraud at Sino-Forest Corp., a Canada-listed Chinese commercial plantation operator. Sino-Forest filed for bankruptcy in 2012.

TAL and Sino-Forest aren’t anecdotal evidence, but a symptomatic confirmation that obscure Chinese companies listed on U.S. exchanges pose a risk to U.S. financial markets and their investors. For every winner such as Muddy Waters, there are potentially thousands of losers—including billionaire hedge-fund manager John Paulson, who lost about $100 million from Sino-Forest.

Broadly speaking, increased foreign issuance of equity and debt by Chinese companies has been playing out over the past several years. Fraudulent or not, this has been a major source of foreign capital into China, juicing foreign direct investment and fueling its recent economic growth.

But it presents huge risks to investors.

Approximately 400 fraudulent Chinese companies were listed on U.S.-based exchanges, according to recent documentary “The China Hustle,” which helped put the issue into the limelight.

The chief issue lies in that unlike U.S.-based firms, Chinese company audit reports and financial disclosures are reviewed by local Chinese auditors, which makes it impossible for U.S. investors to verify their accuracy and independence. And despite cases of fraud, Chinese issuers and their executives cannot be reached by U.S. regulators unless Chinese authorities take action.

“For the last decade, U.S. negotiators have sought to protect investors by ensuring all public accounting firms, both domestic and foreign, disclose their clients’ financial information as required under U.S. law,” the commission wrote. “However, some Chinese firms have refused to divulge their accounting and financial practices to U.S. investors, exposing the limits of U.S. regulators’ ability to protect investors.”

In 2012, the SEC charged Chinese affiliates of the “big four” accounting firms with violating U.S. securities laws for refusing to hand over such documents. Because the accounting firms are set up as a global alliance of local limited partnerships—similar to law firms—U.S. laws have no jurisdiction over the local Chinese affiliate. Years of negotiations between governments led to limited disclosures of information.

Further complicating matters is the way Chinese firms structure their listings. Hundreds of Chinese firms use a so-called “reverse merger,” which is the acquisition of an already-listed U.S. company. Reverse mergers allow companies to list more quickly, less expensively, and without most of the onerous disclosures typically required in the IPO process.

Many Chinese firms—especially in tech—also have complex holding structures with offshore partnerships that further shield them from U.S. laws and provide foreign investors little to no voting or control rights.

The export of financial fraud is a manifestation of greater participation in foreign debt and equity markets by China.

After years of railing against the U.S. dollar for being the dominant currency in global capital markets, China has dove in head first.

Last year, Chinese companies, banks, and regional governments sold a record amount of dollar-denominated debt. Chinese issuers combined to sell about $222.9 billion of U.S.-dollar bonds in 2017. This year, $106.2 billion were issued through June 30, according to Bloomberg data.

The biggest beneficiaries were banks and real estate development companies, which issued $44.7 billion and $44.1 billion, respectively, last year. Real estate firms lead the way in 2018, with $29.9 billion issued so far.

Essentially, Chinese companies and banks are cleverly borrowing money from foreign investors and then using that money to buy up assets abroad.

It makes sense, especially for Chinese developers and banks funding the One Belt, One Road Initiative or another foreign venture. The money is often spent in dollars, and it saves Chinese companies from having to sell yuan to buy dollars—which would put downward pressure on its currency. Further, offshore yields are often lower than those of domestic bonds, resulting in lower costs. Lastly, dollar bonds are mostly sold to foreign buyers, which is more palatable to Beijing bureaucrats amid an ongoing policy of deleveraging. It’s a win-win for Chinese companies.

But is it a win for investors?

Not quite. The S&P U.S.-Listed China 50, which tracks the performance of the largest 50 Chinese companies listed in the United States, has year-to-date returns of -11.7 percent, and one-year returns of -7.7 percent as of Sept. 7.

On the debt side, Chinese authorities in June announced it may ban the issuance of dollar-denominated bonds maturing in less than one year. It was an implied admission of short-term pain ahead, as the Federal Reserve’s interest-rate hikes and President Donald Trump’s trade dispute with China have strengthened the dollar against the yuan, putting Chinese companies with dollar debt—with little to no dollar revenues—at greater risk of default.