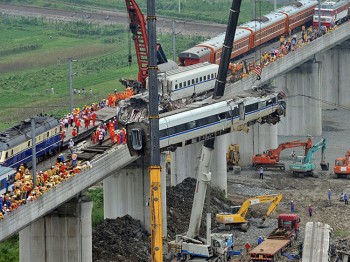 Workers clear wreckage of mangled carriages after a Chinese high-speed train derailed when it was hit from behind by another express late on July 23 in the town of Shuangyu near the city of Wenzhou, in eastern China's Zhejiang province. (AFP/Getty Images)
China

Chinese authorities have blamed a lightning strike as the cause of bullet train D3115 losing power near Wenzhou in China’s southeastern Zhejiang Province, which then led to the fatal collision when another bullet train rear-ended it.

But people familiar with China’s railway system say they were not surprised that such a crash had happened. Some say the crash on the night of July 23 has exposed the serious operational and management problems in China’s high-speed rail system and a lack of concern for public safety.

According to many experts and media analysts, the accident was caused by human errors and negligence, including signal system failure and scheduling problems.

A quality control engineer, using the alias Wei Ming, who once worked as a railway designer in China, told The Epoch Times that the collision happened largely because of operational problems.

“Railway lines are divided into sections known as blocks, and only one train is allowed in one block at a time under normal circumstances. If a train stops, the automatic ‘block signal system’ will signal the train behind it, and it will automatically stop,” Wei said.

According to Wei, if this block signal system ever fails, the shift operator at the central dispatch would use a manual alert system to alert the second train. And if this still failed, the front train [operator] could still alert the approaching train by wireless communication.

“This is the most basic operation requirement in a railway system,” Wei said.

Professor Seiji Abe of Kansai University in Japan, an expert on railway safety, agreed. He said such a rear-end collision is almost unimaginable in Japan and Western countries.

“This has to be related to serious safety system problems in [China’s] railway industry,” Abe told Japanese media.

Some media pointed out that a scheduling error may have also contributed to the collision, as the second train, D301, that rear-ended D3115, was actually scheduled to run ahead of D3115, according to the China Railway online train schedule.

In addition, emergency escape equipment did not function, further putting survivors lives at risk. Many survivors said they could not break the windows because the emergency hammers did not work, and many people were trapped inside the cars after the collision.

China’s monumental high-speed rail system has proceeded at an unprecedented pace over the past decade. Led by Liu Zhijun, the former Minister of Railways, the regime’s ambitious plan has been to transform China’s national rail network, and at the same time to turn China into the global leader of high-speed rail technology by integrating new methods from other countries with its own.

One of the two trains involved in the collision was based on models of Canada’s Bombardier, and the other was modeled after Japan’s Kawasaki Heavy Industries.

The automatic signal control system, however, was developed by China, according to Chinese and foreign media reports.

Japanese experts have stated that China has not yet mastered the ability to integrate technologies from multiple countries and, by insisting on doing so, has turned things into a mess.

Last February, Du Junxiao, editor of the Shaanxi bureau of People’s Daily, quoted a retired railway engineer, saying he would never in his life take a Chinese high-speed train.

Du also quoted another engineer who worked for China Railway Engineering Corporation as saying: “We really could not guarantee the quality of our construction work. For some projects, the steps of survey, design, and construction were all done at the same time. Some projects were handled even worse and didn’t even go through these three steps.”