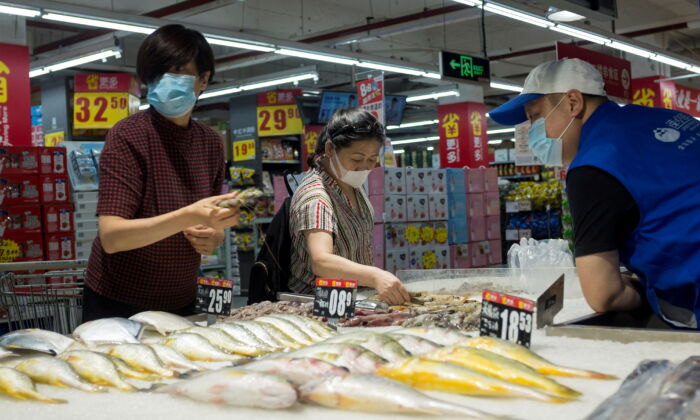 People look at fresh seafood in a supermarket following an outbreak of the coronavirus disease in Beijing on August 13, 2020. (Thomas Peter/Reuters)
China Business & Economy

Both China’s factory gate and consumer inflation rose at a slower pace in December, following the fall of some raw material prices, official data showed on Jan. 12.

China’s producer price index (PPI), which reflects prices that factories charge wholesalers, rose by 10.3 percent last month, down from a rise of 12.9 percent in November.

Factory inflation has moderated in recent months from a 26-year high in October as Beijing intervened to stabilize high raw material prices and ease an energy power crunch.

COVID-19 outbreaks swept a number of Chinese cities in December, including Xi’an, the largest economy of the Shaanxi province, but the consumer market was stable overall, said Dong Lijuan, a senior statistician at the NBS in an affiliated statement.

China set the consumer inflation target at around 3 percent for the year 2021, said a government report in March.

“Lower inflation opens room for the government to loosen monetary policies further. The probability of (an) interest rate cut is rising, in our view,” said Zhiwei Zhang, chief economist at Pinpoint Asset Management, in a note.

China’s economy is facing a series of headwinds in 2022, including property woes, a slowing manufacturing sector, and COVID-19 outbreaks as the world battles the Omicron variant.

Chinese cities are already advising people to stay put for the Lunar New Year, a peak travel period, due to fresh coronavirus outbreaks in several regions.

China’s central bank has said it will keep monetary policy flexible in 2022 as it seeks to stabilize growth and lower financing costs for businesses amid growing economic headwinds.