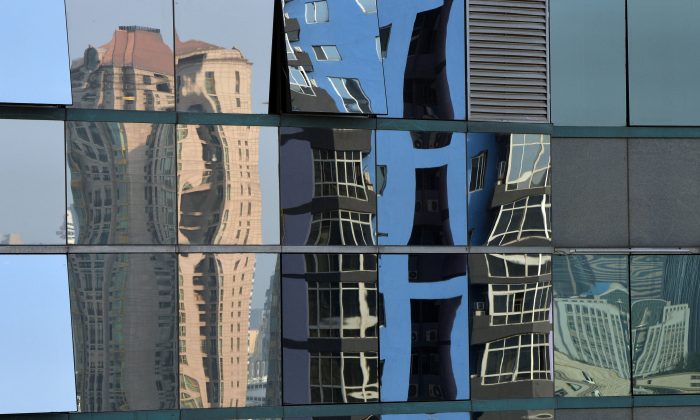 High rise properties are reflected on an office building's windows in Beijing on May 6, 2013. Home prices in Beijing continue to rise, in spite of the awareness that the housing bubble in China will eventually burst. (Mark Ralston/AFP/Getty Images)
China

China’s Economy on the Verge of Collapse

State officials at every level have sought to wring instant benefits out of real estate in China, distorting the economy and setting banks up to fail. Now, the debate about China’s economy is no longer over whether the real estate bubble will burst, but when.

China initiated reform of real estate policy in 1998, and within one year, China had three rate cuts. Interest rates on deposits underwent a rapid reduction from 5.7 percent in 1998 to 1.98 percent in February 2002. In the following decade, interest rates hovered at a low level, between 2 and 4 percent.

Keeping savings in a bank, then, was a losing proposition. The Chinese people had two outlets open to them for getting a return on their money: investing in stocks or real estate.

In 2003, China’s State Council said that real estate would be strategically promoted as a pivotal industry to grow China’s economy. Loans for purchasing real estate should be processed with priority. China’s real estate prices started continuously escalating in 2004.

Local governments fueled the rise in prices with surcharges called “land-transfer fees” and layers of taxation.

According to the calculations of Dr. Ye Tan, a famous financial commentator in China, governmental surcharges and fees have contributed between 50 and 80 percent to real estate prices. In many areas nowadays, the land transfer fees alone constitute about 40 percent of the final real estate price.

Hu Cunzhi, deputy minister of Land and Resources, pointed out on July 11, 2013, that a tacit understanding existed in the land market between the governments that are selling and the developers who are buying. Developers are allowed to illegally take a large amount of land off the market, leaving it undeveloped or underdeveloped. This artificially keeps the supply of land and housing low, which pushes up their price, benefiting local governments.

The regime’s practice of rating officials’ performance by the increase in GDP registered in their area has also driven up real estate prices. Local politicians treat development projects, such as railroads and airports, as political achievements.

However, they devour large amounts of investment, and many are not really needed. Once built, many airports are simply idle, with the number of runways higher than the number of flights the airport hosts in a day.

Highly inflated real estate pricing has distorted China’s economy, causing many industries to divert investment toward real estate. For example, some clothing companies have stopped making clothes, and some electronic appliance manufacturers have dropped making appliances in order to throw all their money into real estate.

Although everyone has been aware that the bubble would burst one day, so long as the bubble keeps swelling, nobody wants to miss the last train to make money.

At the same time, Beijing and Shanghai have benefitted from what are called conglomeration effects. Jobs are available in these two cities, and people are willing to move there for the sake of a job, which helps drive demand for housing.

However, even in Beijing and Shanghai, the wealthy often own several apartments, and many apartments stand empty. In 2007, 36 percent of the apartments in Beijing were empty, and the number is now certainly higher.

China’s GDP growth rate has decelerated. Yet, overinvestment throughout the years has resulted in a significant oversupply of production capacity.

For instance, the expansion of real estate in the past decade has heavily boosted the demand for steel, driving steelmaking plants to expand their capacity. China’s overall steel-production capacity today is almost half of the world’s total, and the steel industry is facing a serious problem of oversupply.

As China’s economy slowed since 2011, the demand for metals has dropped and steel prices plummeted. Now, the steelmaking companies have to come to terms with their heavy debt. The total debt of China’s 86 leading steelmaking enterprises has surpassed 3 trillion yuan (US$480 billion).

To make the situation faced by these companies even worse, their overall profit in the first six months of 2013 was merely 2.2 billion yuan (US$350 million). Thirty-five of these companies (or 40 percent) are running in red ink. Similar overcapacity exists in other segments of the economy.

In 2010, China’s local government debt reached 10.7 trillion yuan (US$1.74 trillion) according to the National Audit Office, while China’s former Minister of Finance Xiang Huaicheng estimated it was 20 trillion yuan. In other words, local debt equaled 20 to 30 percent of China’s GDP.

Many local governments have been taking on new debt to pay the old debt. About one-third of local debt is used to pay off old debt.

Either the failure of China’s enterprises, as overcapacity sends them into bankruptcy, or the inability of local governments to pay their loans can lead to the collapse of China’s economy.

Banks cannot be spared from either crisis. This may be the reason why Bank of America and Goldman-Sachs Group have been dumping stocks of China’s banks.

Before the bubble finally bursts, the real estate pricing in major cities may keep rising, while the prices in some cities, such as Erdos, Wenzhou, and Guiyang, have already started falling.

The falling of real estate prices will cause the flow of cash in the economy to be interrupted. Bank loans won’t be repaid, and the dominoes will start to fall. The bankruptcy of one bank may trigger the collapse of all the others. No matter in which city the bankruptcy first occurs, a chain reaction will start, and the speed of the collapse will accelerate.

After Japan’s bubble burst in the late 1980s, its stock price kept falling for more than two decades. The price of stocks plunged between 70 and 80 percent, and the value of real estate fell 55 to 65 percent. Today, Japan’s real estate is at the same price level as in 1983.

Nobody is sure when the bubble in China will burst, but everybody knows the country is facing many serious problems. Just like a balloon with a thin wall in many spots, the balloon will burst as soon as the weakest spot fails to hold the pressure.