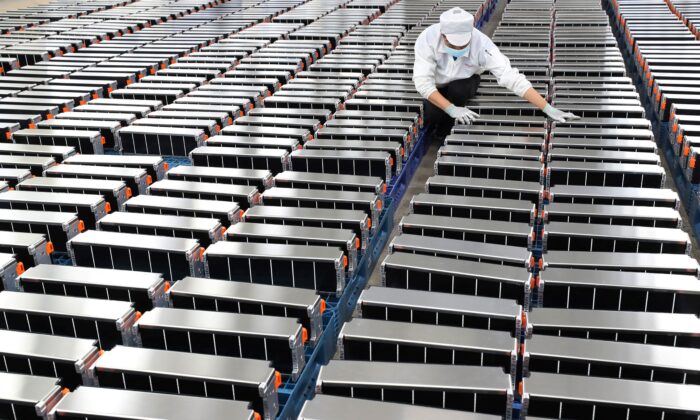 A worker with car batteries at a factory for Xinwangda Electric Vehicle Battery Co. Ltd, which makes lithium batteries for electric cars and other uses, in Nanjing in China's eastern Jiangsu Province, on March 12, 2021. (STR/AFP via Getty Images)
China Business & Economy

“We love our suppliers, and we have a very strong relationship, but we are very dependant on the supplies coming from China. … We think there are risks in terms of the stability of the supply, given everything happens geopolitically,” Tim Karimov, president of U.S. lithium battery manufacturer OneCharge, said in a presentation at the MODEX 22 seminar.

In January, OneCharge released a white paper addressing the U.S. role in global lithium battery manufacturing and the risks China poses to the supply chain.

“China currently dominates the global lithium battery supply chain. Upwards of 70% of the total global Li-ion battery manufacturing capacity is controlled by China. … Should China decide to throttle supply or dramatically raise prices, this would hurt the U.S. transportation and logistics sectors, which are quickly adopting lithium battery-powered electric vehicles,” the report states.

According to the Chinese digital newspaper The Paper, BYD Co. Ltd. (01211.HK), a Chinese conglomerate and electric vehicle manufacturer, is currently in talks to buy six lithium mines in Africa containing more than 27 million tons of lithium oxide at 2.5 percent grade—enough to supply BYD with 10 years of lithium oxide.

EV manufacturers have come under pressure due to the soaring lithium price for EV batteries amid the surging demand for electric vehicles. As a result, many companies also have stepped into the global race to acquire lithium mines.

China’s lithium sources primarily come from ecologically fragile areas, such as the Qinghai-Tibet Plateau, with a harsh natural environment, poor infrastructure, and significant technical challenges. Despite those challenges, Beijing has actively encouraged Chinese state-backed companies to secure lithium mines overseas to surpass Europe and the United States in the new energy industry, according to Chinese state-run media Yicai.

The lithium industry has a high degree of market concentration. In 2020, five companies accounted for nearly half of the world’s lithium production capacity, producing approximately 75 percent of the worldwide supply, according to a report released by China Merchants Bank Research Institute on March 4.

Among them, the Mount Marion Project in Australia is the largest source of Ganfeng’s lithium supply. Ganfeng secures stable raw materials supplies by signing long-term procurement agreements with upstream lithium providers after investing in them.

And in 2018, Tianqi Lithium purchased 23.77 percent shares in SQM, a world-leading brine-based lithium producer. The company has since become the second-largest shareholder of SQM.