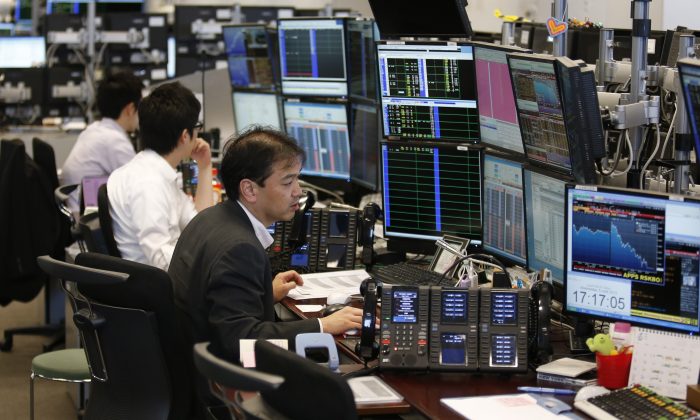 Takashi Yamada (R) a government-bond trader at major brokerage Daiwa Securities Co., monitors screens at his bond trading section in Tokyo on June 5, 2013. Until a couple of months ago, Yamada had one of the most genteel jobs in Japan. Now, his days are so harried he doesn't have time to eat lunch. (Shuji Kajiyama/AP)
Business & Economy

The year 2018 set a record for China’s corporate bond defaults. Based on current data, defaults in 2019 will break last year’s record, as a U.S.-China trade war is taking a toll on China’s declining economy.

Four Bond Defaults in One Day

Jinggong Group defaulted for the first time. Kangde Xin Composite Material Group, which used to be one of the best performing companies on the stock market, is now looking at being delisted. Shandong SNTON Group is in the process of reorganization. China City Construction Group has already had several defaults.

On July 16, Jinggong Group announced that due to the government deleveraging campaign last year and other reasons, the company ran into liquidity problems and could not make a timely repayment for the ultra-short-term bond fund.

The bond it defaulted totaled 1 billion yuan ($145 million) at an interest rate of 7 percent. The company currently has 11 corporate bonds with a combined value of 5.6 billion yuan ($814 million).

Bond Defaults in First Half of 2019 Hit a New High

Corporate bond defaults in China set a new record in the first half of this year with the total amount exceeding 60 billion yuan ($8.7 billion), which is more than double the same period last year, according to Taiwan-based Liberty Times.

Analysts believe unregulated expansions in previous years combined with the current economic slowdown are the main causes of many of Chinese businesses running into financial difficulties.

For instance, real estate developer Yinyi Group in Zhejiang Province failed to make repayment of a corporate bond issued in 2016 with a face value of 700 million yuan ($102 million) that year. Yinyi has expanded rapidly in recent years, with its real estate business covering Nanjing, Shenyang, and South Korea. It also acquired auto parts factories, but failed to recover the cost after the quick expansions. Additionally, the company has issued another three corporate bonds totaling 1.1 billion yuan ($160 million). Analysts believe that Yinyi will default on these three bonds again when they mature.

If bond redemptions increase at the same pace as they did in the first half of the year, corporate bond defaults are likely to break last year’s record of 122 billion yuan ($17.7 billion), according to research company Shanghai DZH.

S&P Global Ratings Senior Director of Corporate Ratings Cindy Huang commented that the funding environment has worsened after the government takeover of the distressed Baoshang Bank, a private lender in Inner Mongolia, at the end of May 2019. The takeover, the first in 18 years, created “volatility in the funding market and the interbank market, has spilled over to corporate sector funding,” she said.