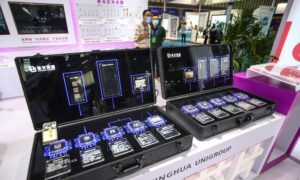 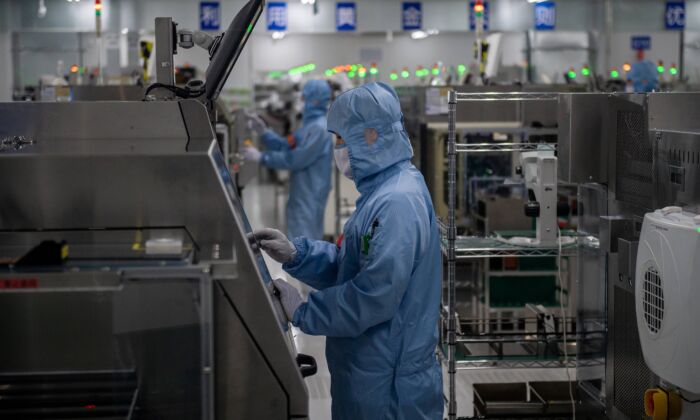 Workers are ween inside the production chain at a semiconductor manufacturing factory in Beijing, China on May 14, 2020. (Nicolas Asfouri/AFP via Getty Images)
China

An $18.5 billion semiconductor manufacturing project in Wuhan City backed by the Chinese regime has failed, with employees having been “asked to resign” before Feb. 28.

The notice was sent to the 240-member internal group chat with on Feb. 26.

The company, which was once touted as the Chinese Communist Party’s key to becoming a self-sufficient chipmaker, made clear that it had “no plan for resumption of work and production.”

Reports said that the company did not offer an explanation or any compensation plan.

Employees felt it hard to accept. One was quoted in the report as saying that “I did not expect HSMC to fail so quickly as there has been speculation that companies like Xiaomi or Huawei might take over.”

Launched in November 2017, HSMC alleged to receive 128 billion yuan ($18.5 billion) investment, with 10 percent directly funded by the Dongxihu district government in Wuhan, to turn Wuhan into a semiconductor manufacturing hub.

The company claimed on its official website, which was closed on Feb. 28, to have experience in making chips using 14-and 7-nanometer technology and smaller, and be able to produce 30,000 chips per month.

However, a telltale sign that the company had an irreconcilable gap in funding surfaced in November 2019. HSMC was involved in a dispute with Wuhan Huanyu, an engineering firm building the factory as a subcontractor, due to the delayed payments.

The project was then halted after the local court suspended the right to use the land for the next three years.

In November 2020, the two-year-old company was taken over by the Dongxihu district government, due to a “large funding gap” and the risk of “break in the capital chain at any time,” the local government report stated (.pdf).

Soon after, Chiang, the former CEO of HSMC, confirmed to the South China Morning Post that he had resigned in June, describing his experience with HSMC as a “nightmare.”

A mainland China media outlet commented that HSMC was a multi-billion dollar fraud. “The actual paid-up capital was zero” by the previous major shareholder—Beijing Guangliang Lantu Technology Company—while hundreds of millions in capital flowed from local government. The two founders of the chipmaking project, Cao Shan and Li Xueyan, did not have any semiconductor manufacturing background.

The analysis attributed the reason that HSMC could gain tremendous capital with almost zero credential to the Chinese regime’s rush to pump up its semiconductor industry.

HSMC is not the first setback to the CCP’s ambition to be self-sufficient in the technological field in the next five years. In the past year, at least six chipmaking projects went belly-up, and each received billions in investment, according to CCP’s mouthpiece Outlook Weekly.

Previously, Wang Zhijun, the vice minister of China’s Industry and Information Technology, expressed concerns about the “short-sighted investment” and “abandoned projects” in the Chinese semiconductor industry.