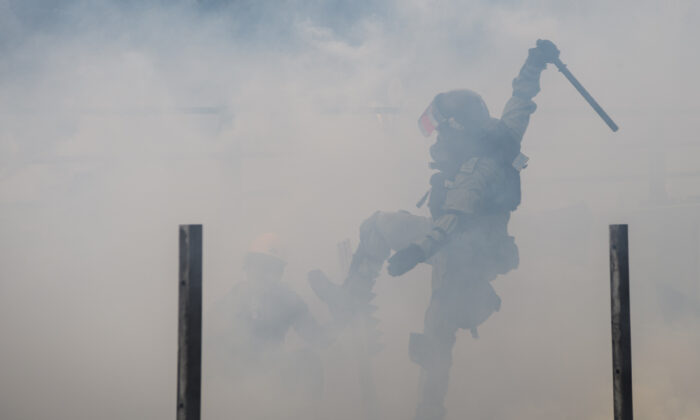 Police detain protesters after they attempted to escape the campus of the Hong Kong Polytechnic University in the Hung Hom district of Hong Kong on November 18, 2019. (ANTHONY WALLACE/AFP via Getty Images)
Viewpoints

Reports of mainland Chinese students being evacuated from Hong Kong and of Chinese troops in the streets are ominous signs that the Chinese communist regime may be preparing for a Tiananmen Square-like massacre or some other military assault to crush the peaceful rallies that Hong Kong citizens have been holding to try to preserve their freedom.

A brutal Chinese military response has been predictable since mass demonstrations began in June, particularly given the remarkable stamina of the demonstrators to date.

However, what the Chinese Communist Party (CCP) may intentionally ignore or not fully comprehend is that the CCP and China’s economy would pay a terrible price for a brutal assault.

China has carefully invented a brand image as a business-friendly “panda,” supposedly light-years removed from its Tiananmen Square Massacre past, but the moment that troops start killing Hongkongers, that image will shatter in the world’s eyes and morph into a rabid lion.

Beijing, of course, is terrified that Hong Kong citizens freely rallying to protect their liberty will give the Chinese people the idea that they, too, can demand their innate human rights.

A sudden loss of freedom or the expectation that things will get much worse is what sparked the current Hong Kong protests, set off the 2009 Iranian demonstrations following their stolen presidential election, and brought together millions to help end Mohammed Morsi’s Islamist regime in Egypt.

Elements of the immediate and long-term aftermath of a Hong Kong massacre may include the following catastrophic results for the CCP:

In short, the CCP loses no matter what it does. Do nothing and the symbolic umbrellas may appear on Chinese streets. A mild crackdown may only invite future uprisings. Commit a massacre and face the above punishments on a worldwide scale.

The butchers in Beijing will mop up the bloodstains and assure investors that the “panda” image is still intact. But it’s tough to erase the memory of a massacre from even the most inhumane investors, much less socially conscious consumers.

The Chinese people, so far silently, have been hoping and praying that Hongkongers will succeed. Perhaps they will move from silent support to follow the Hongkongers to overwhelm the CCP with millions of people holding the streets in support of freedom and democracy. After all, the Soviet empire dissolved at the height of its power. That’s the lesson of the fall of the Berlin Wall.

President Trump can help protect the liberty and lives of the brave Hongkongers with a public message of support for the demonstrators and their universal right to enjoy liberty. The side benefits would be greater leverage against China on trade negotiations, and sufficient pressure may force the CCP to practice restraint and offer concessions to protect liberty in Hong Kong.

Art Harman is the president of the Coalition to Save Manned Space Exploration. He was the legislative director and foreign policy adviser for Rep. Steve Stockman (R-Texas) in the 113th Congress and is a veteran policy analyst and grassroots political expert.