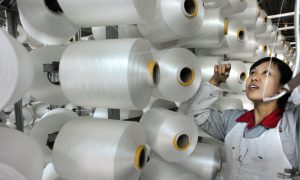 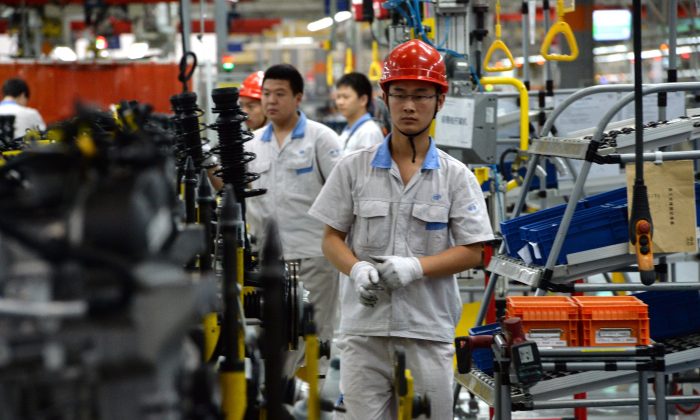 The assembly line at the FAW-Volkswagen plant in Chengdu, Sichuan province, on July 6, 2014. China is attempting to build an advanced manufacturing base. (Goh Chai Hin/AFP/Getty Images)
China

Hamstrung by stagnating economic growth, rising wages, and manufacturing competition from other emerging markets, Beijing last month announced a plan to modernize its manufacturing sector, which had been responsible for the country’s economic rise in the last three decades.

The 10-year Made in China 2025 plan was unveiled by the State Council in late May, and is designed to enhance competitiveness in manufacturing by implementing automation, innovation, and information systems used in manufacturing.

While China hopes to turn itself into a modern manufacturing powerhouse rivaling Germany and Japan, the country and the sector faces big hurdles, which could require fundamental changes to China’s social, economic, and political framework.

Beijing’s 10-year strategy seeks to shift the Chinese manufacturing sector away from labor-intensive production and low-quality goods toward value-added engineering, such as aerospace equipment, robotics, and biotech.

Envisioned by the Ministry of Industry and Telecommunication Technology (MIIT), it hopes to use the plan to increase the quality of Chinese goods mainly through innovation, efficiency/automation, and environmentally friendly manufacturing.

“Germany’s Industry 4.0 is substantially shaping the domestic debate in China on industrial modernization and competitiveness, and both countries are cooperating closely in this field,” Jost Wübbeke, research associate at the Germany-based Mercator Institute for China Studies, said in an interview with Deutsche Welle, Germany’s national broadcaster.

The strategy puts China in direct competition, potentially, with Germany, Japan, and the United States, which are the current world leaders in high-tech manufacturing.

This path also means improvements are necessary not only in the manufacturing industry but also high technology.

The strategy puts China in direct competition, potentially, with Germany, Japan, and the United States.

To this effect, the Shanghai Stock Exchange (SSE) is planning a new trading platform specifically targeting small startups in an effort by the Chinese regime to promote new technologies. The exchange has more relaxed listing requirements compared to the SSE, including waiving certain revenue requirements for small companies.

The Made in China 2025 strategy outlined specific, measurable goals, including a chart with projections for 2015, 2020, and 2025, but the path to achieve such goals wasn’t contemplated, and it’s unclear which companies or government agencies will be executing the plan.

“While China is quite strong with regard to certain figures such as R&D expenses and patent grants, it has so far not been able to turn its resources into a qualitative improvement of its innovation capacity,” said Wübbeke.

For instance, China has created advanced robotics within its university walls, but such technologies were rarely developed to become commercially viable. Today, the country’s factory assembly lines use robots imported from Europe and Japan.

Today, the country’s factory assembly lines use robots imported from Europe and Japan.

That’s one of the biggest challenges facing Beijing’s 2025 plan—the lack of an environment conducive to innovation. Its ambition to become a world manufacturing power would be stunted by a lack of entrepreneurship and presence of a stable and business-friendly justice system.

Even state-owned publications in China are skeptical of the plan’s success. According to Beijing’s Economic Observer, developing a big enough supply of qualified skilled manpower for the high-tech manufacturing sector is a key challenge facing China.

Unlike toys, clothes, and even cars, advanced machinery such as airplanes, aerospace equipment, supercomputers, advanced medical devices, and house electronics, are Internet-connected, and require subsequent service and maintenance.

Any purchaser of such expensive equipment from China must be certain that such equipment is not only of quality construction, but would not pose an information security risk.

And this is where the Made in China 2025 train could get derailed.

Last month, researchers found computers made by China’s Lenovo Group had certain preinstalled malware that could spy on users.  The malware, which essentially rendered system-level security privileges useless, was the latest of a growing list of security vulnerabilities found on Lenovo computers.

The recent hacking of U.S. government computers was also attributed to Chinese regime-sponsored hackers. Personal data of more than 4 million U.S. government employees was stolen from the Office of Personnel Management, according to U.S. officials.

So, would you be comfortable buying aerospace equipment or supercomputers from a Chinese supplier?