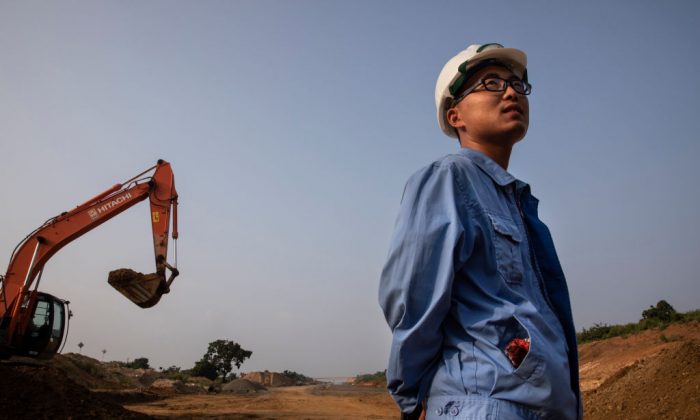 A Chinese site engineer is seen on site as the extension of the Southern Expressway from Matara to Hambantota continues under construction near Hambantota, Sri Lanka, on Nov. 16, 2018. (Paula Bronstein/Getty Images)
International

Tactics allow China to expand its human-rights abuses, according to critics
By Emel Akan

WASHINGTON—Through its Belt and Road initiative (BRI), China is pouring billions of dollars into emerging countries to help build massive infrastructure projects. Many of these projects, however, are financed through Chinese state-controlled lenders, leaving some nations distressed by debt burdens and putting their sovereignty at risk.

BRI, also known as One Belt, One Road, is one of the world’s most ambitious development programs, spanning almost 70 countries and covering more than two-thirds of the world’s population. It was first proposed by Chinese leader Xi Jinping in 2013.

The Chinese Communist Party has made the initiative a centerpiece of its plans to grow its geopolitical influence. The initiative aims to deliver trillions of dollars of investment for a vast network of transportation, energy, and telecommunications infrastructure linking Asia, Europe, and Africa.

BRI’s massive construction projects are financed mainly through a wide range of Chinese local government and state-controlled institutions. In recent years, however, the initiative has been perceived as a “debt trap,” raising the risk of economic distress in borrower countries, particularly in Central and South Asia.

The issue of whether Beijing is pursuing “debt diplomacy” through this initiative has sparked a new international debate, as well. Contrary to its promises to deliver prosperity to the local people in host countries, China is playing a zero-sum game, according to critics.

Jeff Smith, an expert on South Asia at The Heritage Foundation, says some BRI deals are a one-way street. Speaking on a panel hosted by the foundation, he said that participating nations accumulated large sums of debt owed to Chinese financial institutions and were stuck with high-interest rates.

In addition, Chinese contractors grab the lion’s share of the construction of many infrastructure projects. Participating nations compensate Chinese firms by using Chinese materials and workers.

According to a study by Center for Strategic and International Studies, out of all the contractors participating in Chinese-funded projects, 89 percent are Chinese companies. That’s in contrast with projects funded by multilateral development banks that typically use almost 40 percent local contractors.

Malaysian Prime Minister Mahathir Mohamad called the initiative a “new colonialism” to express his unease about China’s growing political and economic influence in the region.

Westerns countries have raised concerns about Beijing’s ambitious international-development plan, because of issues that include lack of standards, transparency, and accountability in construction deals. According to Smith, these deals have facilitated corruption and nepotism, and undermined existing lending practices and international standards.

The hundreds of billions invested in these countries haven’t produced any economic returns; Beijing is mainly seeking geopolitical returns, which has inflated the debt risk.

“There are certainly questions about financial sustainability and a risk of debt distress” for countries participating in BRI, said Smith.

According to the research firm RWR Advisory Group, 270 BRI infrastructure projects (or 32 percent of the value of the total projects) have been put on hold because of financial concerns. And the sovereign debt of 27 BRI participant countries is regarded as “junk” by the rating agencies, while another 14 have no rating at all.

Countries such as Djibouti, Kyrgyzstan, Laos, the Maldives, Mongolia, Montenegro, and Pakistan are in serious trouble, according to Smith.

Pakistan’s external debt payment, for example, will surge by 65 percent next year. Meanwhile, its foreign-exchange reserves have fallen by 40 percent over the past two years.

“That is unsustainable,” Smith said.

The debt trap diplomacy has also allowed China to expand its human-rights abuses. There is an increase in harassment of Chinese dissidents abroad, the arrests of foreigners in China, and a crackdown on academic freedom. And China has been using its economic and political influence in the region to silence critics.

Smith said that most China experts will say there’s been a shift over the past decade in not just China’s foreign policy but also its domestic policy toward becoming a more assertive nation, and “in some ways, a more aggressive nation at home.”

The Trump administration has been a vocal critic of BRI and China in the past two years; it has been particularly concerned about the rising debt crisis in the Asia-Pacific region.

Treasury Secretary Steven Mnuchin earlier warned of the looming financial crises in the region and pointed to China, calling it a “non-transparent emerging sovereign creditor.”

The issue was also raised at the G-20 summit in Buenos Aires and the world leaders agreed to take steps to address “debt vulnerabilities in low-income countries.”

“We will work towards enhancing debt transparency and sustainability, and improving sustainable financing practices,” said the statement.

The G-20 countries also called on “the IMF and World Bank to work with borrowers and creditors to improve the recording, monitoring, and transparent reporting of public and private debt obligations.”