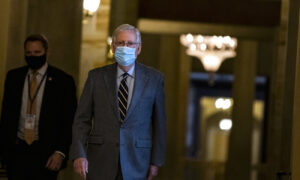 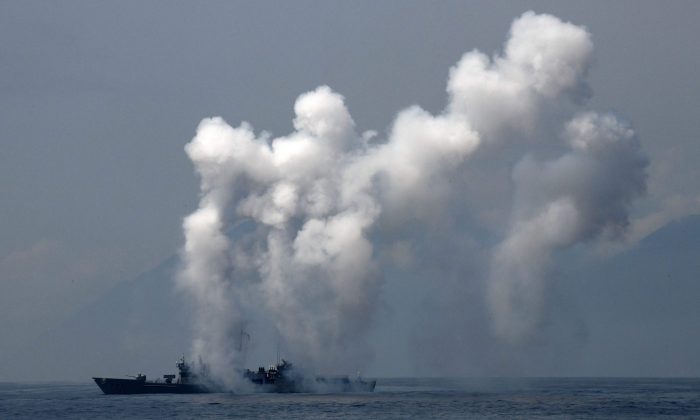 A frigate launches chaff and flare during a drill at the sea near the Suao navy harbor in Yilan, eastern Taiwan, on April 13, 2018. The naval drills simulating an attack on the island took place soon after Beijing announced the Chinese regime will hold live-fire exercises in the Taiwan Straits on April 18. (Sam Yeh/AFP/Getty Images)
Thinking About China 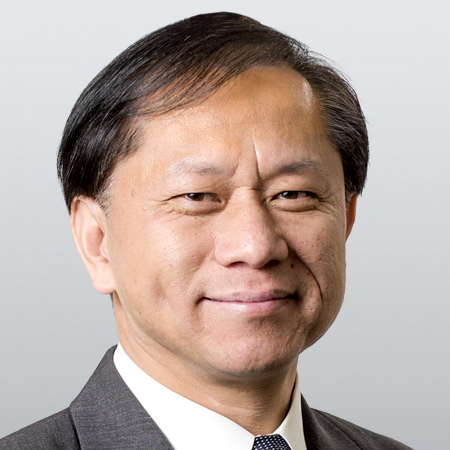 In the past half-century, China-U.S. diplomatic relations shifted from ping-pong to a more aggressive form of contact sport. Fifty years ago, on April 10, 1971, the U.S. table tennis team became the first group of Americans to set foot in China for a friendly match. This move led to the visit of then-President Richard Nixon to China in February 1972, and also made “ping-pong diplomacy” a new term in international diplomatic relations.

An event was held to mark the 50th anniversary of the ping-pong diplomacy on April 10 at the International Table Tennis Federation Museum in Shanghai. Special guests included James Heller, U.S. Consul General in Shanghai, and former Chinese ping-pong players Zhang Xielin and Zheng Minzhi. But the event didn’t receive a lot of attention from the United States and the U.S. Embassy did not send an ambassador. It seems the United States and China now have diplomatic relations at the chargé d’affaires level.

The Americans have been good to China and the Chinese people—such as establishing the Boxer Indemnity Scholarship Program in 1908, assisting China in the Second Sino-Japanese War, preventing the Soviet Union nuclear strike against China in 1969, opening up the market to China, and providing what it desperately needs today, including corn and soybeans.

Even if the Chinese Communist Party (CCP) and its mouthpieces at home and abroad deliberately attack the United States, many Americans are only angry with the CCP and its autocracy, but not the Chinese people.

It is a pity that the CCP neglected the perfect opportunity established 50 years ago to establish closer ties with the United States, embrace the West, and integrate in the international community. Instead, the CCP spreads its communist ideology and anti-American propaganda around the world while accepting aid from the United States. The China-U.S. relations have changed from friendly competition to one that is dangerous and aggressive.

No matter what role Premier Li Keqiang plays in the CCP’s foreign policy, and regardless of what he said to American business leaders at a recent videoconference about the importance of cooperation between both countries, China and the United States are gradually moving towards complete decoupling, and even a military confrontation is brewing.

While the American diplomatic team was brushing up their table tennis skill in Shanghai, a totally different scenario was staged in Beijing and Taipei. As Chinese military planes and warships frequently threaten Taiwan, the CCP’s propaganda on incursions into Taiwan’s air and waters has also been rampant.

When President Joe Biden’s special envoy for climate, John Kerry, arrived in Shanghai on April 14 to discuss global climate issues, former U.S. Senator Chris Dodd (D-Conn.) arrived in Taiwan on the same day. The former senator was accompanied by former Deputy Secretaries of State Richard Armitage and James Steinberg, as well as Dan Biers, director of the Office of Taiwan Coordination at the State Department. The delegation met with President Tsai Ing-wen the next day and also met with high-level officials from the Ministry of National Security, Foreign Affairs and National Defense of Taiwan.

Tsai said, “We are very willing to work with like-minded countries, including the United States, to jointly safeguard the peace and stability of the Indo-Pacific region and deter aggression and provocation.”

I believe the United States will help Taiwan counter China.

Before the activities in Beijing and Taipei took place, U.S. Secretary of State Antony Blinken delivered his latest speech, stating that the source of the COVID-19 pandemic must be thoroughly investigated to avoid future “biological threats” and not to let down the future generations of the United States. He also said, “This is a pivotal moment—a time for us to think big and act boldly. And the United States will rise to the challenge.”

Behind the policies of the Biden administration is, of course, the ammunition provided by the U.S. intelligence services. When attending the Senate hearing, CIA Director William Burns said that out-competing China will be key to “national security in the decades ahead” and “an adversarial, predatory Chinese leadership” poses the biggest geopolitical test.

The message from the CCP’s Taiwan Affairs Office conveys that the Chinese regime is determined to curb Taiwan independence and sever Taiwan-U.S. ties—this reveals the CCP is concerned that Taiwan and the United States will form an alliance.

Negotiations between China and the United States could go nowhere. The CCP is not interested in discussing climate change and human rights issues, as it is more concerned about the Taiwan Strait.

On the issue of climate change, the United States hopes that China will stop building coal power stations, stop building coal power plants under the Belt and Road Initiative (BRI), and stop financing overseas coal companies. The CCP hopes to obtain clean technology and that Washington will announce a substantial emission reduction plan. The Biden administration has partially continued former President Donald Trump’s tough strategy. But if the current administration relaxes restrictions to meet the demands of the CCP, it would only endanger U.S. interests.

At present, China-U.S. relations has deteriorated. I believe that the ping-pong diplomacy has turned into an ugly and aggressive game. Bear in mind that a communist regime does not abide by the rules. It would be unrealistic to expect the CCP to be a sport. In dealing with the Chinese regime, the United States should put on a real football game and break through with real defense and attack.

Frank Tian Xie, Ph.D., is a John M. Olin Palmetto professor in business at the University of South Carolina Aiken, and a visiting scholar of the National Taiwan University.