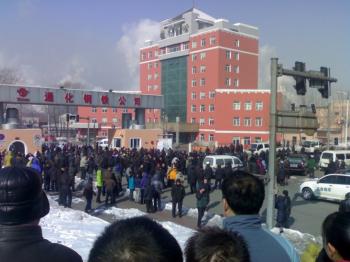 Workers outside the Tonghua factory in Jilin Province, in unrelated protests about pay cuts in March, 2009. (Blogger photo)
China

Xue Fei
View profile
Follow
biggersmaller
Print
Three newly established independent labor unions in Jinan City, Shandong Province, announced plans to form a political party for workers on Sept. 2, according to a press release from China Affairs, a Chinese dissident website based in the U.S. The details have not yet been made public owing to fear of reprisals in China.

At a joint meeting recently the three unions determined that their next step is to set up their own political party, tentatively named the “United Workers Party.”

They have not published a membership list, leader names, or any other information for fear that Chinese authorities would seek them out for punishment, as has happened before in similar circumstances.

Workers at the three enterprises have all felt the pressure of China’s modernization. The China Qinqi Group, for example, a large SOE founded in 1956, has tens of thousands of workers who rely on the company for survival. After the reform of the Chinese steel industry from the late 1970s, however, the company faced bankruptcy. Many workers lost their jobs and their entitlements went missing, yet those responsible were not punished.

In northeastern China, a key industrial area where there is a concentration of large state-owned enterprises, similar situations have been reported.

The Jilin Tonghua Iron and Steel Group (TISG) incident of last month is a typical example. On July 24, 30,000 TISG workers protested against the proposed privatization of the corporation with the Jianlong Group. TISG workers faced the possibility of being laid off. Their anger turned to violence when they beat to death Chen Guojun, a general manager of Jianlong who was supposed to oversee the deal.

The attempts at privatization come at a time when Chinese policymakers are trying to reform chronically underperforming SOEs in the steel industry, which are still owned by national or local authorities.

“Many workers guilty of no wrongdoing have been laid off, and are in a helpless situation,” the press release from the unions said. “Because of this, workers need to establish their own union; whether for current employees, those who have already been illegally laid off, or those retired, they can all join this free union.” The official name of the union is Free Union, an apparent attempt to draw a distinction between itself and the status-quo.

The only union movement currently permitted in China is the China All-China Federation of Trade Unions, which is widely recognized as being an organ of the CCP and of not actually representing worker’s rights. “It’s all under the CCP, but it doesn’t listen to the workers, it’s just for the CCP to talk,” Wu Fan, editor of China Affairs said. “Workers don’t want this union, they want their own union, they want to represent their own interests, and to be able to speak for themselves.”

Workers are also blocked from forming their own unions in China. Last year, after appealing in vain for eight years, over 10,000 laid off workers from Jilin Petroleum planned to form their own union. They were obstructed by authorities, however, and their representative, Chen Yuping, was sent to labor camp for 18 months. He was released on July 28 of this year.

Wu Fan says the CCP is “very, very afraid,” of workers forming a union. Before the CCP took power in China, they fought with the Nationalist Party through unions, Wu Fan explained. “Now they’re very scared of these workers not listening to the CCP. They’re afraid the workers will rise up against them, because their own history is this way.