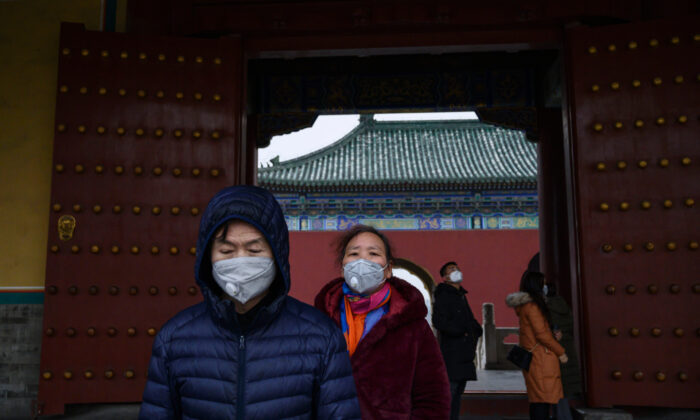 The Chinese regime is likely underreporting the true scale of the coronavirus outbreak, according to a Harvard epidemiologist.

Fears of a rampant epidemic are mounting after the infectious disease hit most parts of China and have spread to over a dozen countries globally.

Official figures record the pneumonia-like virus infecting thousands and killing scores, although experts say the total number of infections is vastly greater than that reported by the communist regime.

In a recent study by Imperial College London, the researchers found that “self-sustaining human-to-human transmission” is the “only plausible explanation of the scale of the outbreak in Wuhan.”

Researchers said that each infected individual could infect 2.6 others, on average, and the authorities would need to block transmission of more than 60 percent of the cases to contain the outbreak.

Another study that U.K. and U.S. experts released on Jan. 23, currently in preprint, put the reproduction number at around 3.8, although this was later revised to 2.5.

With a reproduction number of 3.8, China would need to control 72 percent to 75 percent of the transmissions to prevent the virus’ spread—”an almost impossible task, by locking up the entire city,” said Michael Lai, a U.S.-based molecular biologist with Taiwan’s Academia Sinica.

China has quarantined 17 cities, postponed school openings, and extended the week-long national Lunar New Year holiday to Feb. 2, in an attempt to curb the disease’s spread.

Despite such efforts, 5 million people left the virus epicenter of Wuhan before the lockdown took effect on Jan. 23.

The experts of the preprint study estimated that less than 10 percent of infections have been identified in Wuhan so far.

“Should the epidemic continue unabated in Wuhan, we predict the epidemic in Wuhan will be substantially larger by [Feb. 4],” the researchers wrote, projecting more than 190,000 infections to occur by then in the city alone.

It said that large outbreaks could also develop in major cities such as Shanghai, Beijing, Guangzhou, Chongqing, and Chengdu.

Guangdong’s Center for Disease Control and Prevention on Jan. 25 put the reproduction number at 2.9, saying the disease “may have a higher pandemic risk than SARS”—a large outbreak originating from southern China from 2002 to 2003, which officially killed about 800 worldwide.

“I would say there is a very high pandemic risk,” said Dr. Eric Feigl-Ding, an epidemiologist at Harvard University, citing conclusions in the Chinese CDC report.

He said the risk was exacerbated as a result of asymptomatic patients spreading the virus unknowingly.

China’s health minister, Ma Xiaowei, told reporters on Jan. 26 that the coronavirus, unlike SARS, is infectious during its incubation period, which can last up to 14 days—meaning it can be transmitted even when the infected person exhibits no symptoms.

A Jan. 24 study in The Lancet identified a coronavirus patient, aged 10, who didn’t exhibit any symptoms prior to a medical inspection. Two other patients in the same study didn’t have signs of fever.

Such findings have raised fears that current screening measures, which check body temperature, are not effective in detecting the disease.

Recently, two patients from Wuhan passed screening checks in France and didn’t show signs of infection until one and five days later, respectively.

Feigl-Ding said this trait of the coronavirus “makes containment much more difficult” than in the case of SARS, which was not infectious during incubation.

He also suggested that a lot of the official figures on the infections and deaths are based on data that is not up-to-date, due to there likely being an administrative “backlog.”

Between Jan. 25 and 26, the reported number of patients jumped by 50 percent, from around 2,000 to roughly 3,000. There have been a number of occasions where the deaths were not reported until at least a day later, making it difficult for those on the outside to gauge the true situation, he said.

The large backlog in cases awaiting testing suggests “there’s lots of suspected cases [that] are not confirmed,” Feigl-Ding said. “When there’s a backlog of testing, everything’s delayed, which affects everyone’s prediction model.”

He said that he expected the World Health Organization (WHO) to declare a global emergency over the situation very soon. Last week, WHO stopped short of labeling the outbreak a global health emergency.

The organization on Jan. 26 assessed the outbreak’s risk level as “very high” within China and also “high” on an international scale. The U.S. Centers for Disease Control and Prevention on Jan. 27 has recommended that travelers avoid any “non-essential travel” to China.

Chinese authorities have detected four generations of spread of the virus in Wuhan—meaning a person who contracted the virus from its original non-human source infected a person, who infected another person, who then infected a third person.

Second-generation cases have also been detected outside of Wuhan. This phenomenon indicates that the virus is “tough,” according to Lai.

As a virus replicates in a new host, it typically weakens, therefore to see it survive through to the fourth generation suggests the Wuhan coronavirus has “adapted well in humans,” Lai said.

According to Lai, RNA viruses—viruses that have RNA as their genetic material rather than DNA—such as the Wuhan coronavirus and SARS, have a “high mutation rate,” which allows it to “change properties very quickly.”

As an example, in the Lancet study, the RNA sequences isolated from 6 patients from the same household are different from each other, he noted. Lai said he observed in his previous research the “frequent occurrence of RNA recombination between different coronavirus strains,” a sign of the virus evolving.

Such news “may not be so good to the ear; it suggests the difficulty of containing this virus,” Lai said.

An earlier version of this article misstated Eric Ding’s title. The Epoch Times regrets the error.