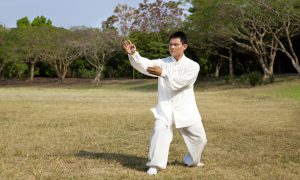 The future of transportation is a thing of the past! China’s bootleg Segway is making a segue into the Segway market by buying Segway!

Like many Chinese companies, Ninebot is committed to innovation.

Ah yes, innovation. Ninebot makes a Segway. Which of course is not a Segway, it’s a “personal transportation robot,” totally unrelated to superficially similar devices.

And whereas that other unrelated product has been relegated to a walking punch line in the US , in China it’s regarded with utmost seriousness.

These are counter terrorism forces in Shandong province doing drills in the lead up to the 2008 Olympics. I don’t see how they’re Counter Terror because I’m terrified!

…that terrorists will use the stairs.

If you look at a Ninebot PTR and a regular Segway side by side, you might notice a few similarities.

And you might think that perhaps Segway ought to file a lawsuit against Ninebot. Well, they have.  And so Ninebot did the only sensible thing. Rather than admit to intellectual property theft, they simply made a deal to buy Segway.

So this really marks a new era in US-China relations. Intellectual Property Theft is rampant, and a serious source of contention.

But that can be a thing of the past now. Because Chinese companies can just copy a product, make it for cheaper, and then use the profits to buy out the original struggling US company. Paper wraps rock.

So what do you think about the “Chinese Segway”? And the new Chinese Segway? Let me know your thoughts in the comment section below.