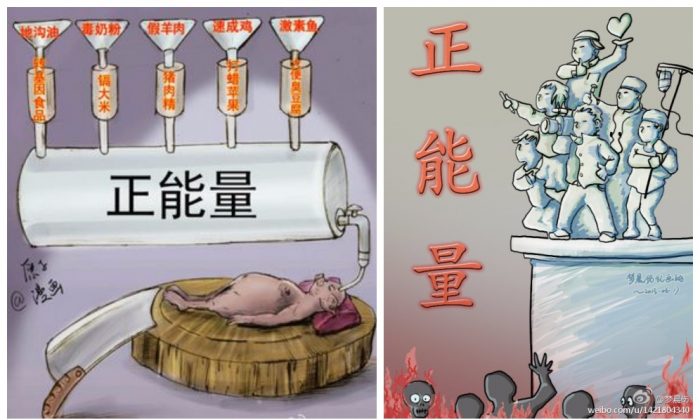 In the left picture, a trough of "positive energy" is infused into a pig-like figure representing the Chinese Communist Party. The supposed nutrients represent the various maladies of modern Chinese society, such as poisoned milk powder, fake mutton, etc. The illustration on the right is also meant to make fun of the Party's concept of "positive energy,” which precludes criticism of the regime. (Weibo.com)
China

The next time someone levels criticism of the People’s Paradise of China, you can tell them to stop spreading “negative energy.” What China needs is “positive energy,” according to the Chinese Communist Party. If only the positive energy was substantial enough to turn into bricks—like the toxic smog collected from Beijing’s air with Nut Brother’s vacuum cleaner—then it would actually be useful.

After being detained, a television star shouted at a guard: “I am a celebrity! I want to meet with a lawyer!” Then he saw all his jail inmates standing up and smiling at him: “The most renowned lawyers in China are already here!”
—Freeweibo

Explanation: In recent years, the Communist Party has frequently used the term “positive energy” (“正能量“) in mouthpiece articles and even official announcements. Like many other political slogans created by the Party, the exact meaning of the term is ambiguous. The term and its antonym “negative energy” (“負能量”), have come to be extremely popular on the Internet—used both ironically and in support of the regime. Many netizens also argue that the term has been abused by Party officials, who respond to legitimate criticism with claims that “we need positive energy, not negative energy!”

@YE5MQ5Vtp2jlWX7: “We all know ancient China’s Four Great Inventions. However, we invented papermaking but now lose the freedom to read. We invented printing but still has no freedom of press. We invented gunpowder but we are not allowed to have guns. We invented compass but we have to circumvent the censorship when surfing the Internet.”
—Botanwang

@mayue: “In a society based on credibility, what people worry about is that they may lose all their credibility after breaking a promise just once. In Chinese society, people think that if they can just pull off one big con, they can win back everything they’ve lost before.”
—Qiwenlu

@Xu Meitun: “These are the three most shameless theories of (communist) China. First, ‘Actual Condition Theory”, used to explain anything that we do worse than other countries. This theory is an omnipotent fig leaf, as now even forced home demolition and beating to death women who protest unpaid salaries is due to China’s ‘actual conditions.’ Second, ‘Conspiracy Theory’, used frequently against criticism from any foreign countries. This fig leaf is to hide all the crimes against humanity committed by the regime. Third, the ‘History is Unimportant Theory’, used to convince people that ‘all [bad] history has become the past.’ Many people thus seldom realize that so many of the present problems are evil legacies of the past!”
—Twitter

Huang Tao, the chief judge of Feng County People’s Court in Jiangsu province, wrote seven love letters to his mistress over five years, according to recent reports. Most interesting for Internet users was that some of the letters were sealed, along with Huang’s signature at the bottom, with stamps of the court.

In the letters Huang made promises like: “I love you so much and will never lie to you again,” “Your words are supreme instructions to my act,” and “I will divorce my spouse right after May 2015.” The letters are either sealed with Huang’s court stamps or his red wax thumbprint.

But later, the two had a falling out. After Liu , the mistress, was diagnosed with liver cancer, she asked Huang to pay back the 200,000 yuan ($31,255) he had borrowed from her. He declined to do so, and Liu then accused him of being a swindler. Huang denies it.

Many Chinese netizens had fun with the story on the Internet. One comment said: “It is a very innovative idea to promise one’s love with court stamps. But unfortunately China’s courts have nearly zero credibility.” Another top-rated Weibo comment said: “Did the judge obey court orders and divorce after May 2015? This is critical to see whether China is ruled by law!”

Tencent published a series of photos on Wang Renze, an activist-artist known as Nut Brother who is collecting toxic smog particles in Beijing with a vacuum cleaner and turning them into bricks. Wang calls the project “Dust Plan,” the goal of which is to make people realize how serious air pollution in China’s capital has become.

Wang has been doing the performance art for 100 days now. He carried the industrial vacuum cleaner with him as he wanders the city, extracting dust and pollutants from Beijing’s atmosphere. Per each full battery charge, the vacuum cleaner can collect about the volume of air breathed by 62 people each day. The collected “smog” is then compressed into a brick.

Top-rated comments from netizens include: “There is at least one brick in the lungs of every Beijing resident. If you are an aged person, maybe there are five in your body.” Another comment said: “Wow—we have bricks for food every day. My mom never needs to worry that I’ll go hungry again.”