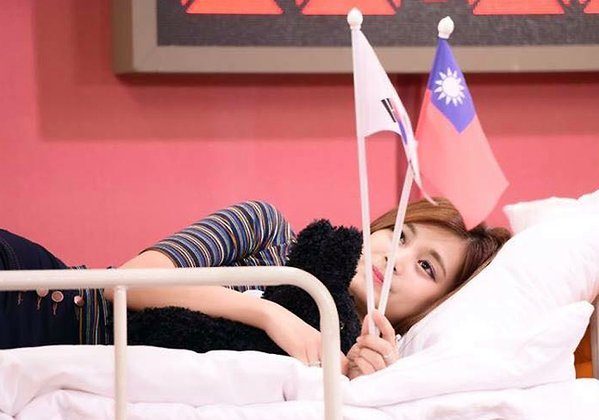 Chou Tzu-yu poses for a photograph with the South Korea and Republic of China flags, an image that led to her forced confession identifying herself as Chinese. (Weibo.com)
China

Chinese Internet users reflected on the difference between Taiwan and China this week, thoughts no doubt impelled by the recent election in Taiwan, and concurrent with it, the appalling forced self-confession of 16-year-old pop singer Chou Tzu-yu. They also wondered why most institutions of state power are said to belong to “the People” in China, when the actual Chinese people have almost no say.

Explanation: The word “people” (“人民” in Chinese) here refers to “common people” as opposed to government officials or other “people’s delegates” who collude with those in power to benefit themselves. Despite being a dictatorship, the Chinese Communist Party names its institutions of rule, including the rubber-stamp legislature, the courts, police, hospitals, and numerous other agencies, with the attributive term “the People’s…”, the deep irony of which is often remarked upon by (actual) Chinese people.

Mr. Wang once took a week-long holiday trip. Because he worried about home theft, before departure he left on the dining table a 100-yuan bill along with a note which said: “Dear Mr. Thief, please kindly accept this pocket money. You need not waste time searching my home, since there is almost nothing valuable. On the other hand, my neighbour is an official working in the Ministry of Railways. There should be a lot of cash hidden in his home—and what’s more, he cannot call the police even if the money is stolen. Yours Sincerely.” A week later, Wang returned and found that the amount of cash he left on the table had grown to 200,000 yuan. On the back of his note the following words were found: “Please kindly accept this fee for your intelligence, Yours Sincerely.” —Creaders

On the Chou Tzu-yu incident

@ResetTor: “One of the most ridiculous things about China is the following fact: From Party officials to common people, almost everyone chooses to emigrate if given the opportunity. In the meantime, they like to forcibly impose what they think on foreign people, and sometimes even force others to admit ‘they are Chinese.’ Such nationalist behavior is simply absurd to any other country in the world. ‘I can emigrate if I want, but you have to say you are Chinese,’—such is communist China’s nationalism.” —Botanwang

The Shanghai government had over 200 lawsuits brought against it in 2015, and remarkably never lost a single one, according to a recent mainland Chinese media report.

The official report was meant to set the tone of applauding improvements in China’s “rule of law.” The number of lawsuit cases brought by people against the government allegedly grew to 242 in 2015, from only 14 in 2014. The article also quoted a presiding judge who claimed that “the Shanghai government generally did a good job in regulating its administrative acts.”

However, many Chinese Internet users struggled to disagree more heartily. A top-rated comment on Weibo said: “You are telling the story as if there were justice and law in China.” Another comment on Sina said: “What is the hidden message here? Are you trying to say the Shanghai government did a very good job last year, or rather warn people from suing the government because they’ll never win anyway?”

In a CNN interview, U.S. Vice President Biden told a story about how President Obama stopped him from selling his house to support his son, Beau, who had to stop working and receive cancer treatment. The president promised to offer whatever financial help necessary.

The story was originally meant to describe the personal relationship that had developed between the two men—but Chinese Internet users saw in it something different.

The translated report on ifeng.com, the website of Hong Kong-based, de facto Party mouthpiece Phoenix Television, became a hot topic, drawing over 3,600 comments. The vast majority of them had nothing to do with whether the friendship between the two national leaders was emotionally moving or not—instead it was about why the vice president of the United States had to sell his house to support his son. Many Chinese regarded the idea as “unthinkable” for even a low-level governmental official in China.

The debate was sometimes intense. One line of commentary expressed scorn against the United States, with comments like: “If the vice president of paradise has to sell his house to save his child, then how is that different from Hell?” The terms “paradise” and “Hell” refer to the United States and China in this context.

A response said: “The difference is, the vice president in Hell would never need to sell his house—he’d have a thousand ways with his power.” Another comment remarked: “In China, the vice president would only be annoyed by the fact that he had so many houses and wouldn’t know which one to sell!”