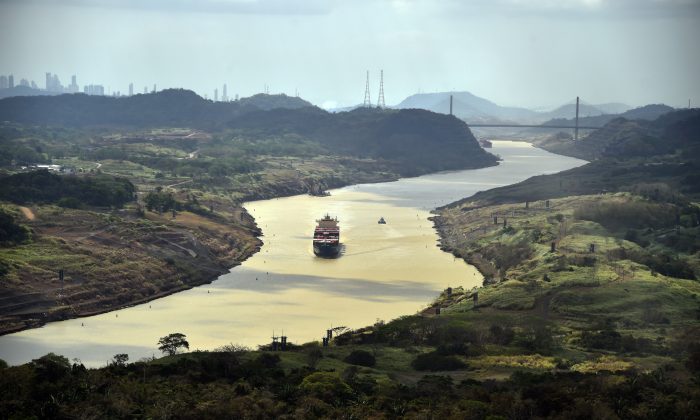 A merchant ship sails along the Panama Canal, in this file photo. China is continuing its push to displace U.S. influence in the region, and already has put parts of the Panama Canal under its control. RODRIGO ARANGUA/AFP/Getty Images
Viewpoints

China, the US, and the Panama Canal 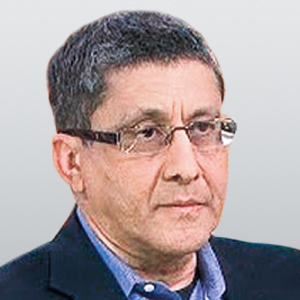 Tensions between the Chinese regime and the Trump administration, already taking the form of an escalating trade war, now appear to be intensifying in Central America and the Caribbean, creating a new wrinkle in a temperamental and volatile relationship.

On the anniversary of the Torrijos–Carter Panama Canal Treaty, on Sept. 7, the State Department recalled Roxanne Cabral, the U.S. Charge d’Affaires in Panama. Also recalled for consultation in Washington were the U.S. ambassadors to the Dominican Republic and El Salvador, Robin Bernstein and Jean Manes, respectively. Each diplomat represents the United States in countries that have switched their diplomatic relations to China from Taiwan within the last year.

According to the communique issued by the State Department, the diplomats were scheduled to “meet with U.S. Government leaders to discuss ways in which the United States can support strong, independent, democratic institutions and economies throughout Central America and the Caribbean.”

For some in the region, the tone of the statement implies the concern that Chinese largess may be undermining institutional stability in these countries.

One area of concern for the Trump administration is the pace at which countries are breaking off diplomatic ties with Taiwan and normalizing relations with China.

Beijing refuses to maintain diplomatic ties with countries that recognize Taiwan, a self-ruling island of 23 million people off the mainland’s southeastern coast that the Chinese regime considers to be a renegade province. Taiwan has had longstanding diplomatic and economic ties in Latin America, but the trend is shifting in favor of Beijing.

While Washington switched its formal diplomatic ties from Taipei to Beijing in 1979 and adheres to the “One China Policy,” it also continues to maintain a de facto embassy in Taiwan called the American Institute. More critically, the United States sustains a strategic alliance with Taiwan, including the sale of arms to the self-governed island and a pledge to protect it in the event of a military conflict.

For years, Taiwan was a crucial element in a U.S.-led cordon sanitaire around China … and the Panama Canal.

In addition to the change in diplomatic recognition by Panama, the United States is increasingly concerned that the Panamanian government has already made extensive concessions to Chinese interests along the Canal Zone, with 43 percent of the free-trade zone’s activities currently under Chinese control, according to Euclides Tapia, a University of Panama international-relations professor.

The United States is also uneasy about a number of other joint Chinese—Panamanian accords signed in the areas of finance, economic cooperation, railways, and industrial matters. Many of these accords are being made by the Panamanian executive, without consulting the country’s national assembly.

The lack of scrutiny and democratic due process in these accords also worries some Panamanian business and political forces.

Critics of these accords in Panama believe the Central American country’s growing indebtedness to China will lead to Chinese interests building a fourth set of locks in the canal. According to Tapia, the Chinese want to construct a fourth set of locks, but the constitution doesn’t recognize that, so there’s no need for legislative approval.

“They are already conducting a feasibility study without anyone’s approval. In other words, they’ll indebt us up to our necks and that canal won’t be Panama’s until it pays what it owes,” Tapia said in local newspaper La Estrella de Panamá.

The Chinese regime’s practice of leveraging billions of dollars in debt to obtain critical assets, economic dominance, and political influence in Asia has alarmed a growing chorus of critics in the Americas, as well.

A recent report by Harvard University researchers cites a growing number of countries with debts too large to pay back, allowing Beijing to “acquire strategic assets or political influence over debtor nations.”

In one example, a port in Sri Lanka built with Chinese loans was leased to Chinese state-owned firms for a period of 99 years to help repay the country’s multibillion-dollar debts. The same could conceivably happen in other indebted countries. One concern for U.S. national security interests is that such facilities could have multi-use purposes and could go from commercial, to logistical, and possibly even military use.

The stakes in the Panama Canal are high. The United States’ major anxiety is control of access to transoceanic shipping. That has always been a strategic geopolitical interest of U.S. foreign policy, and the merest threat that a power—and an adversarial one at that—could have that control is untenable for U.S. national-security interests.

Many national-security analysts believe the prospect of a canal with a military base from an adversarial nation located in the Western Hemisphere could unleash a geopolitical crisis.

China’s intentions to build a canal through Nicaragua have been routed. Financial and other considerations have all but ended the possibility of a Chinese-owned and controlled canal through that nation. China has long had other proposed projects, including state-of-the-art rail lines and other transport infrastructure, to help its transoceanic trade, but a transoceanic canal remains a priority.

As China works to achieve its aims in the Americas, tensions with the United States are likely to escalate. A deteriorating relationship has been aggravated by the volatile terms of trade and a host of other conflicts.

The latest exchange of diplomatic communiques and warnings by the superpower in the region may mean a renewed interest in the region and a possible shift in the center of gravity between the United States and China.

Fernando Menéndez is a writer and analyst of China–Latin America relations based in Washington.